Have you ever wished there was one big hub connecting all the different LEGO websites, picture-sharing sites, blogs and forums? One place where you could see what’s going on in the LEGO-fan world and share your passion with others in the hobby? A place where you could show off your own LEGO projects, and see the work of others no matter which LEGO community they belong to? How about having one spot you could keep and organize all the awesome LEGO pictures, videos, blog -posts and articles you run across while browsing the web? Well, wait no more! 🙂

Today I would like to share with you a very unique and revolutionary project initiated by the LEGO Group in collaboration with the LEGO-fan community. It is called ReBrick, and you can find it at ReBrick.com. Here is a short video to give you an introduction to ReBrick:

As you can see, ReBrick is a social media hub where adult users can share and discuss user-created content online. It is a public stage for LEGO fans to share their wonderful models and creations with each other and the general public. You don’t upload content to the site directly,  instead the basic functionality is for the user to bookmark content from other sites – such as Flickr, YouTube, MOCpages and similar sites – and have a discussion at the ReBrick hub. 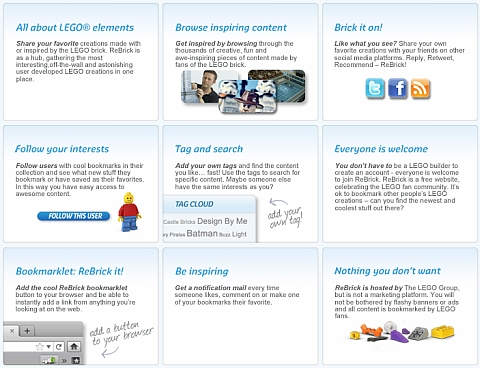 Although the ReBrick website is made and facilitated by the LEGO Group, ReBrick is not part of LEGO.com. While LEGO.com is for children (of all ages), ReBrick caters to fans over 13. Though the LEGO Group retain ownership of the site, they have no commercial agenda – there will be no product announcements, campaigns, advertisements, advertorials or any attempt made to market LEGO products. The content is brought in, discussed and ultimately owned by the community – that’s you and me! 😛

Here is an excellent video featuring an interview with Peter Espersen, the man in charge of ReBrick. His idea and vision for ReBrick is very inspiring:

I really respect Peter for what he has done here; not just creating a bridge between the LEGO company and LEGO enthusiasts, but also pioneering a new way of a large corporation facilitating and interacting with their fans.

The website-platform is quite similar to the LEGO CUUSOO site featuring most recent, highest rated and most viewed uploads on the front page, with easy navigation all around. You can sign into ReBrick with your standard LEGO ID (or make a new ID if you don’t have one yet). 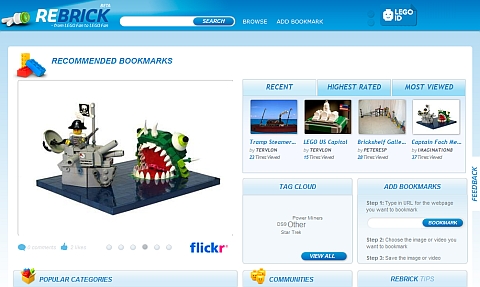 ReBrick is still in beta stage, and you are encouraged to give feedback on the features and functionality of the website via a tab on the side available on each page. So head over to ReBrick.com to check it out, and then let me know what you think! 😉

Next post: NINJAGO news – Lloyd Garmadon has a blog!