With the Easter weekend you may have missed the great news: the LEGO SUPER HEROES Marvel sets have been released just yesterday, and are now available at LEGO stores, LEGO’s online shop, Toys’R’Us and other retail locations. This has really been a big deal for LEGO and comics fans, so enjoy the new sets! 😛

Here is a list of the freshly released LEGO SUPER HEROES Marvel sets: 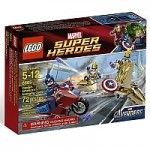 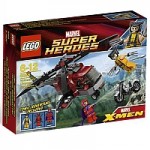 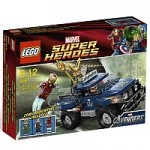 #6867 LEGO SUPER HEROES Loki’s Cosmic Cube Escape – Seize the stolen cosmic cube from Loki! Loki is escaping from S.H.I.E.L.D. headquarters with the powerful cosmic cube. If he succeeds, he could use it to wreak havoc on the world! Can Iron Man take to the skies in his amazing armored suit and chase down the speeding off-roader or will Loki escape with the cosmic cube? You decide! Includes 3 minifigures: Iron Man, Loki and Hawkeye. 181 pieces. Price: $19.99 – BUY HERE 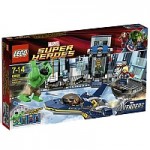 #6868 LEGO SUPER HEROES Hulk’s Helicarrier Breakout – Help the heroes stop Loki from breaking out of the Helicarrier! The Hulk and Thor have Loki captured on board the Avengers’ awesome Helicarrier. Use the exploding containment cell function to bust Loki out and then use the function-packed jet fighter to get away! Can the Avengers keep Loki locked up and out of trouble? Includes 4 minifigures: Hulk, Thor, Hawkeye and Loki. 389 pieces. Price: $49.99 – BUY HERE 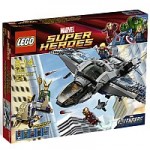 #6869 LEGO SUPER HEROES Quinjet Aerial Battle – Defeat Loki and his forces with the super fast Quinjet! Loki is up to no good and is planning to destroy the earth! As he flies into battle on board his chariot, help the Avenger’s defeat their nemesis using the supersonic Quinjet! Fire the missiles, release the mini-jet and imprison Loki in the prison pod! With the high-tech Quinjet, the Avengers can’t fail! Includes Thor, Iron Man, Black Widow, Loki and foot soldier minifigures. 735 pieces. Price: $69.99 – BUY HERE

I might as well include the previously released LEGO SUPER HEROES DC Universe sets also for your convenience, so you can see them in one place. 😉

Here is a list of the currently available LEGO SUPER HEROES DC sets: 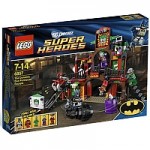 #6857 LEGO SUPER HEROES Funhouse Escape – Help Batman save Robin from the villainous trio! The Riddler, The Joker and his sidekick Harley Quinn are holding Robin hostage at their evil funhouse! As our hero Batman jumps off his cool Batcycle, can he avoid the trap door, big hammer and moving floor and rescue his crime-fighting partner? Includes 5 minifigures: Batman, Robin, The Joker, The Riddler and Harley Quinn. 380 pieces. Price: $39.99 – BUY HERE 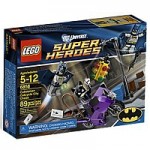 #6858 LEGO SUPER HEROES Catwoman’s Catcycle City Chase – Stop Catwoman’s escape in the streets of Gotham City! On the back streets of Gotham City, Batman is trying to stop Catwoman from escaping on her speedy motorbike with a large diamond. Help him to topple the traffic light and cut off her getaway with his fast flying batarang! Includes 2 minifigures: Batman and Catwoman. 89 pieces. Price: $12.99 – BUY HERE 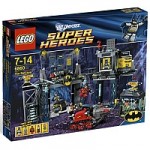 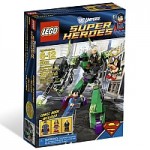 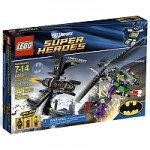 #6863 LEGO SUPER HEROES Batwing Battle – Stop The Joker from dropping “toxic laughing gas” on Gotham City! Hanging on a ladder below his helicopter, The Joker prepares to bomb the citizens of Gotham City with toxic laughing gas. Swoop Batman down in his ultra-fast Batwing to save the day! Can the Caped Crusader use the flick missiles to send The Joker spinning off into the sunset? Or is all of Gotham City in peril? Includes: Batman, The Joker and a henchman. 278 pieces. Price: $34.99 – BUY HERE 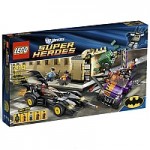 #6864 LEGO SUPER HEROES Batmobile & Two-Face Chase – Foil the bank raid and send Two-Face home without a penny! As Batman heads toward the bank in his Batmobile, he spots Two-Face and his evil henchmen zooming off with a huge safe in tow! Help Batman put a stop to Two-Face’s wild ride and return the safe to where it belongs! Includes 5 minifigures: Batman, Two-Face, 2 henchmen and a guard. 531 pieces. Price: $49.99 – BUY HERE

Let me know how you like the LEGO SUPER HEROES Marvel and DC sets released in the comment section below. Also, you can check out the LEGO Super Heroes section for more news, videos, and discussions. 🙂