Here are the current LEGO Monster Fighters set. I also encourage you to check out the detailed pictures on LEGO’s website (click on the links or pictures below to get there). They are deliciously evil! 😈 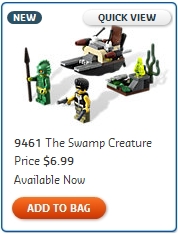 LEGO Monster Fighters – The Swamp Creature: Defeat the Swamp Creature and grab the moonstone! On board his swamp boat, Frank Rock is on the lookout for the Swamp Creature’s moonstone. If the Vampyre gets his undead hands on it first, he could use it to eclipse the sun and plunge the world into eternal darkness! Can he make it past his slimy adversary and snatch the stone? You decide! Includes 2 minifigures: Frank Rock and Swamp Creature. 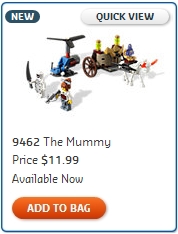 LEGO Monster Fighters – The Mummy: Stop the Mummy’s chariot and take the moonstone! In her cool helicopter, hero Ann Lee flies after the Mummy making an escape in the ghostly chariot. If she can’t stop the Mummy from handing the moonstone over to the Vampyre, the world will be cloaked in eternal darkness. Help her to stop him! Includes 2 minifigures: Ann Lee and Mummy. The skeleton horses glow in the dark! 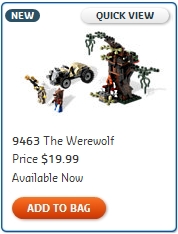 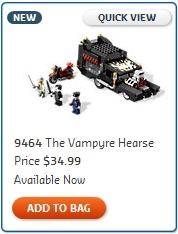 LEGO Monster Fighters – The Vampyre Hearse: Stop the hearse and retrieve the Vampyre’s moonstone! The Vampyre and his faithful servant the zombie driver have the moonstone and are making a getaway in the black hearse. Can Dr. Rodney Rathbone catch them on his motorcycle and steal the moonstone? Or will Vampyre launch a surprise coffin attack and send the doctor spinning out of control? Includes Rodney Rathbone, Vampyre, and driver. 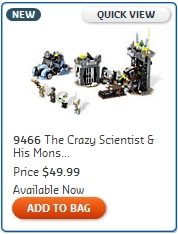 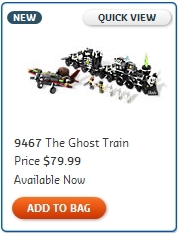 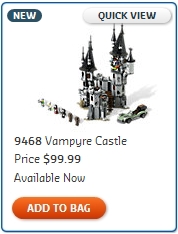 LEGO Monster Fighters – Vampyre Castle: Enter Vampyre’s castle and rescue the world from eternal darkness! It’s time for the final showdown with the Vampyre! He has gathered all 6 moonstones at his castle and is about to cloak the world in darkness forever so that his followers can roam free for the rest of eternity! Will our heroes Dr. Rodney Rathbone and Jack McHammer survive the castle’s hidden spikes and traps to disable the moonstone device?

The LEGO Monster Fighters sets are also available on Amazon, however listings have been getting out of stock very quickly. Make sure you look at listings that are directly from Amazon.com to receive the best prices and free shipping. Below are some of the listings:

The LEGO Monster Fighters theme is a really interesting project developed by LEGO designers. I know monsters, zombies, and evil creatures are very popular with kids (and adults) these days, but only time will tell how successful Monster Fighters will be. What do you think? 😉

And you may also like to check out our previous posts on LEGO Monster Fighters for reviews, videos and discussions: