BrickStix – stickers for your LEGO bricks!

The inventor is Greyson MacLean, who dreamt up BrickStix when he was nine years old. An avid LEGO-fan, he was frustrated with not being able to customize his LEGO creations to his heart content. He wanted to use decals, but didn’t want to ruin his LEGO bricks with sticky residue. Also, he wanted the stickers to be easily removable and repositionable in case he changed his mind. And thus, with the help of Grayson’s mom, BrickStix was born…

Since his invention Grayson became the winner of the TAGIE Award for Young Inventor of the Year, as well as numerous other awards. Here is an interview with the young inventor of BrickStix: 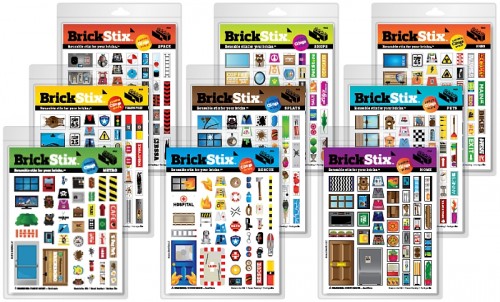 Themes included in the BrickStix cling-decal line include Metro, Transport, Space, Rescue, Splats, Shops, Pets, Home and Signs. Each of the packages contains two sheets of decals. Please note that the price may sound a bit high, however these decals can be used over and over again, therefore much better than regular decals or stickers – no need to buy replacements! 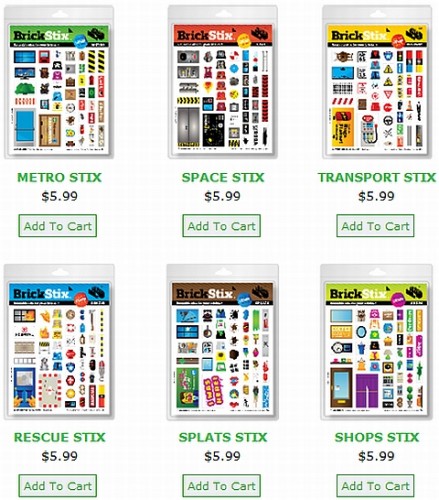 ➡ The second product line is called Mod Stix. They are removable and repositionable stickers. They do have a sticky side like regular stickers, but unlike most stickers, Mod Stix have a special adhesive that won’t leave residue on your LEGO bricks. They can also be removed and repositioned many times. (Click image for larger view.)

Themes included in the Mod Stix sticker line include Comics, Medieval, Special Forces, WWII, and Zombies. Here also, each of the packages contains two sheets of decals. Also, Mod Stix are dry-erase compatible, so you can write your own words and customize your stickers! 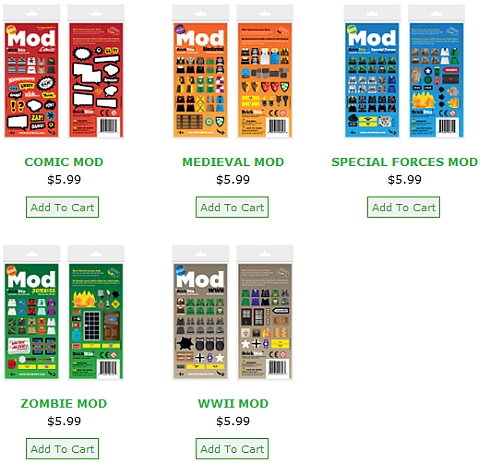 I have to say that I’m extremely pleased with both the Brick Stix cling-decals and the Mod Stix. In general I very much dislike the stickers provided with LEGO sets; they are hard to position properly, and almost impossible to reposition without ruining the corners of the sticker. And after repositioning them a couple of times they loose their stickiness and the corners will curl up or wrinkle. And if you do manage to put a sticker on properly, they will crack and discolor with age, and also leave an ugly residue when you want to take them off. 🙁

The Mod Stix stickers are like traditional stickers, but much easier to use and much longer lasting. I was very happy to see that even after putting on and taking off the sticker several times the corners didn’t wrinkle, the stickiness was still there, and the sticker didn’t leave any residue at all.

And the BrickStix cling-decals are just brilliant! I like these even more than the stickers! They work like magic! Shame on LEGO for being far surpassed by a nine-year-old and fixing the sticker problem LEGO fans have been facing for decades! Now I’m just waiting for LEGO to team up with this boy and implement his products in LEGO sets! It would be the right thing to do! I hope LEGO is listening, because “only the best is good enough”! 🙄

If you would like to check out BrickStix products, you can visit their website at BrickStix.com. Also, right now BrickStix needs your help to obtain a $250k grant for small businesses. They need 250 votes in total by June 30th. So far they have 170 votes. Just three days left to vote! Please help them out! All you need to do is visit missionsmallbusiness.com, search for BrickStix and add your vote. You can also encourage your friends to vote by tweeting, sharing and liking this post. Thanks! And of course as usual, feel free to share and discuss in the comment section below! 😉