LEGO added a new section to the Online LEGO Shop that is currently available on the USA and Canadian site: LEGO Sets Retiring Soon. The company is trying to cut back on calls from disappointed shoppers who are upset that a set they wanted got retired. To eliminate this problem LEGO added the Retiring Soon tag to items and the LEGO Sets Retiring Soon section. Sets on this list won’t be going on back-order and no more will be produced. Once the current stock is sold, they are gone for good. 😕 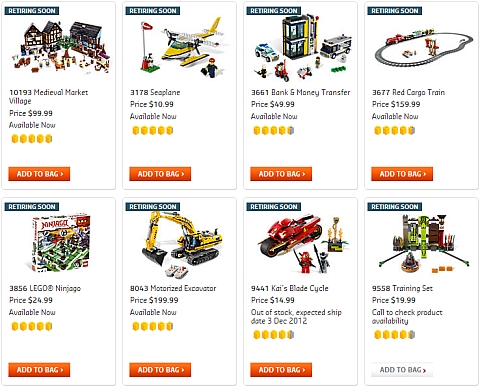 Above are the items on the current list of retiring soon LEGO sets, including the #10193 LEGO Castle Medieval Market Village, the #3677 LEGO Red Cargo Train and the #8043 LEGO Motorized Excavator. There are also some smaller sets, including Ninjago and City.

The sets on the retiring soon list are not on sale, however if you want to get them before they are gone this is your last chance. I did compare the prices on Amazon, and the #10193 LEGO Castle Medieval Market Village is selling for $89.86 with free shipping and no tax to most states, so you might want to pick it up on Amazon instead. But either way if you want them don’t delay and be sorry later. You are probably aware that once a LEGO set is no longer produced prices immedidately increase on the secondary market.

I also added a link to the LEGO Sets Retiring Soon section in the right-hand side bar under LOOKING FOR LEGO? for your convenience. There is also a link there for the LEGO Sales & Deals section which is also worth checking on a regular basis – especially during the Christmas shopping season, and right after Christmas. In previous years this section was full of excellent deals that were moving really fast!

What do you think of the LEGO Sets Retiring Soon section? Do you think LEGO is making the right move to inform customers of what to expect? Or perhaps this is just going to be a way for eBay resellers to buy up mass quantities of sets and make a killing? Share your thoughts below! 😉