by Thita (admin) on December 22, 2012
in Featured LEGO Creations

LEGO CUUSOO is a project by the LEGO Company allowing LEGO fans to submit product ideas. If the project gets enough votes from the community they will get reviewed by the LEGO team and will be considered for production. We have featured several LEGO CUUSOO projects here in the past (see links at the end of this post). This past June four LEGO projects reached the required 10,000 votes. The result of LEGO’s decision of which ones to approve and which ones to reject just got announced a couple of days ago. So let’s talk about that! Below is the official announcement from the LEGO CUUSOO Blog, so we can take a look at what happened. 😛 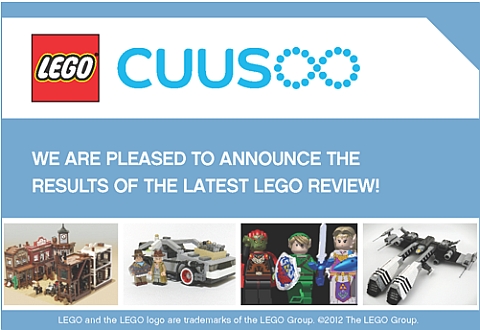 At long last, we’re thrilled to announce the results of the Summer LEGO Review in a video message to all of you. In June, four LEGO CUUSOO projects entered the first of what will be regular quarterly reviews of projects that successfully reach 10,000 supporters. These four projects – Back to the Future DeLorean Time Machine, EVE Online Ships – Rifter, The Legend of Zelda, and the Modular Western Town – have gone through a lengthy review process.

21103 Back to the Future Time Machine – It is with great pleasure we reveal that the next LEGO CUUSOO set will be the Back to the Future Time Machine, based upon the LEGO CUUSOO project by m.togami & Sakuretsu. As one of the earliest projects on the site’s global open beta, headlines of a potential Back to the Future LEGO set was seen on popular sites including Gizmodo and Brothers Brick, helping LEGO CUUSOO gain massive appeal. The final product is still in development in coordination with our license partner, Universal Partnerships & Licensing. We’ll show the final model and you’ll be able to order your own copy when it becomes available in mid-2013 (exact dates & pricing to be determined).

What does the review process look like? The review process goes through four distinct stages; Brand Fit Analysis, Business Case Development (including License Agreements if applicable), Model Design, and then a Final Review, where the findings of all prior stages are reviewed together. Check out this blog post for more detailed description of the review process.

How did we arrive at our decisions? We know you are interested in more information about the decision process, and what has happened with each project. Though we cannot share all details of our business decisions, here is what we have decided to share about each project:

➡ Back to the Future DeLorean Time Machine by m.togami* & Sakuretsu – After analyzing the supporters of the Back to the Future project, we learned that this product has a broad, worldwide appeal. The model presented in this project is built very closely to the LEGO Group’s design standards and has therefore provided a strong base to design the final product. It has a high play value and it fits well with supporters’ price expectations. For these reasons, the Back to the Future project has passed the LEGO Review, and has been selected for production as the next LEGO CUUSOO set. The final product, pricing, and release dates are still being determined.

➡ EVE Online Ships – Rifter by czar – The supporters we received for the EVE Online Ships – Rifter project allowed us to examine the feasibility of another gaming-related product. However the Rifter presented a more challenging business case when considered alongside other potential products in this review period. Therefore, the LEGO Review Board has decided that this project does not meet the requirements for the business case.

➡ The Legend of Zelda by MINGLES – The Legend of Zelda project shows broad support among gaming enthusiasts. This project has provided great inspiration and concept work for what could be a very nice product. However, multiple new element moulds would be required to create the minifigures for such a product, and the expense of these moulds means that The Legend of Zelda project does not pass the LEGO Review on the basis of the business case. (Please note: If a project does not pass the LEGO Review please do not interpret that as an indication that we will not consider similar projects in the future.)

Fall Review in Progress – The Fall Review is currently in progress, and the Winter Review period has started as of Monday, December 3. The next review deadline is Monday, February 4, 2013. Best of luck on your own projects’ journeys to 10,000!

So, those are the results for this batch of LEGO CUUSOO projects. Back to the Future fans are of course very happy, however supporters of the other projects find LEGO’s explanation of why they were rejected quite thin. For example contrary to LEGO’s statement, there is no LEGO project that conflicts with the CUUSOO Western Town. The LEGO Modular line doesn’t have Western themed buildings and the upcoming LEGO Lone Ranger theme is not a competition either. In fact the CUUSOO Western Town could be a perfect complementary expansion for LEGO Lone Ranger fans. The reason for rejecting The Legends of Zelda project was too many new moulds, however LEGO regularly makes new moulds that are only used once – think of all the new moulds in the Collectible Minifigure Series that haven’t been reused. And in case of the EVE project, LEGO considered it a “more challenging business case” than the other reviewed projects, however the project was in fact supported by EVE developers, so this should have been in fact an easier business case, not harder. 😕 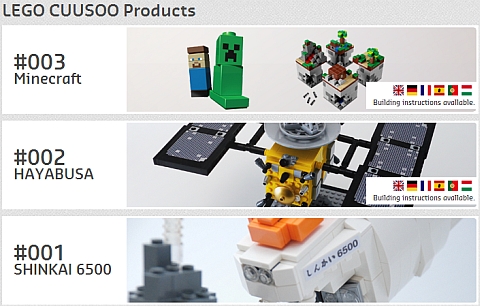 My personal opinion is that although LEGO doesn’t explicitly say this, from a batch of CUUSOO projects that achieves 10,000 votes at the same time, only one project will be selected and the rest will be rejected, depending on which one LEGO considers the easiest business case. This brings a whole new dimension to projects submitted by fans. A CUUSOO project doesn’t just have to worry about getting enough votes, but also what other projects are reaching 10,000 votes at the same time. I wonder if LEGO would allow resubmitting a slightly different version of the same project, as it is very possible that a project could be rejected in one time period and approved in another, based on what other projects are submitted at the same time. 🙄

What do you think? Do you agree with LEGO’s choice and decision? Or do you think CUUSOO is going in the wrong direction? I would love to hear your thoughts and opinions, so please share them below! 😉