LEGO is continuing the trend of making many of the 2013 LEGO sets available at their website and retail stores before Christmas. Another theme that was just listed at their website is the 2013 LEGO Teenage Mutant Ninja Turtles. They won’t be available for purchase until the 17th of December, but at least you can look at the details and decide if they are for you. We discussed the LEGO Teenage Mutant Ninja Turtles theme before so I won’t go into great detail (see previous articles at the end of this post), but I will give you the links to check them out yourself. 😉 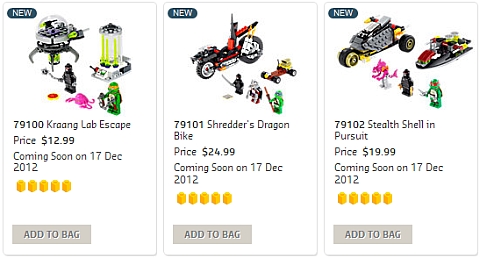 ➡ #79100 LEGO Teenage Mutant Ninja Turtles Kraang Lab Escape – Spring Michelangelo out of The Kraang’s Lab! Give the villains the slip with a hot slice of turtle power! The Kraang has Michelangelo locked tight in a laser-shield prison inside his lab. Use Michelangelo’s leftover pizza to turn a sticky situation into a slick escape! Slide the pizza through the prison bars to make the Foot Soldier slip and fall! Then activate the explosion function on Michelangelo’s cage to escape! Once he’s free, battle The Kraang in his awesome mech walker with dual laser flick missiles. Be ready for a wild ride through the city sewers when The Kraang detaches the mech walker’s legs to create a flying escape pod! Don’t let him get away! Includes 3 minifigures: Michelangelo, Foot Soldier and The Kraang. Price: $12.99 – SEE MORE DETAILS & BUY HERE 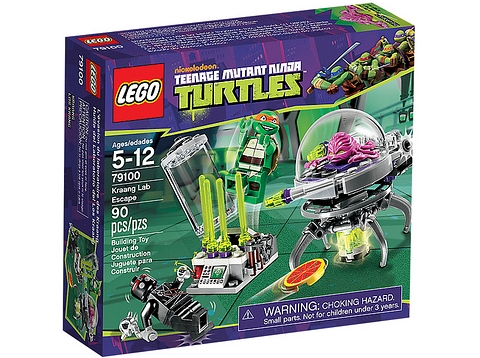 ➡ #79101 LEGO Teenage Mutant Ninja Turtles Sredder’s Dragon Bike – Chase after Shredder and get the map back! Kick up the turtle-powered action to take on Shredder! When Shredder speeds by on his Dragon Bike with dual flame exhausts and real rubber tires, Donatello spots a map to the Turtles’ lair in his claws! Crank up Donatello’s motorized skateboard to stop him before he finds the secret lair. Battle the Foot Soldier with Donatello’s bo staff and chase the metal-faced menace through the city streets to get that map back! Includes 3 minifigures: Shredder, Donatello and a Foot Soldier. Price: $24.99 – SEE MORE DETAILS & BUY HERE 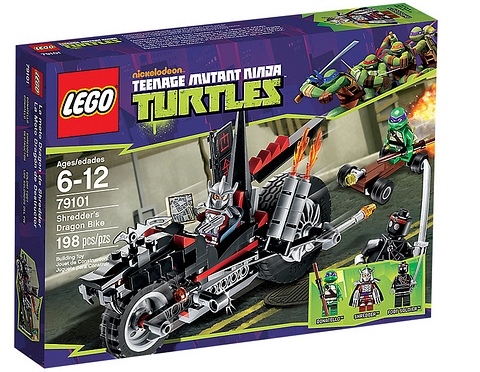 ➡ #79102 LEGO Teenage Mutant Ninja Turtles Stealth Shell in Pursuit – Stop Fishface in a Stealth Shell sewer chase! Fishface is out looking for trouble on his ooze-launching sewer skimmer. Chase him through the city sewers in Raphael’s Stealth Shell! Outmaneuver his reverse flick missiles with the Stealth Shell’s tri-wheel design and dual flame exhaust. Then fire the dual flick missiles at that menacing mutant before he launches ooze all over the city! Includes 2 minifigures: Raphael, Foot Soldier and Fishface. Price: $19.99 – SEE MORE DETAILS & BUY HERE 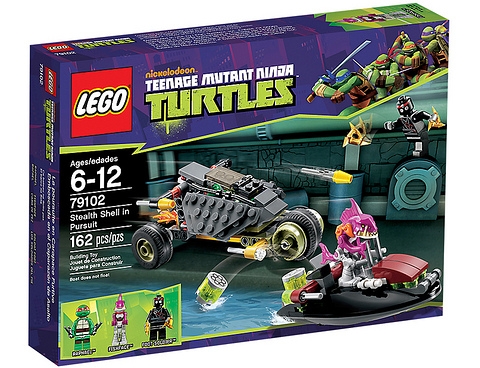 ➡ #79103 LEGO Teenage Mutant Ninja Turtles Turtle Lair Attack – Defend the Turtles’ Lair in a Dark Ninja ambush! It’s an intense day of training in the Turtles’ Lair. Instruct Leonardo in the ninja arts with Master Splinter and the rotating training dummy. Then experiment in Donnie’s lab. When the explosion function is triggered by the Dark Ninja and his Foot Soldier minion, it’s time for a turtle-powered ninja battle! Fight in all 3 stories of the Turtles’ Lair with 10 weapons and a pizza shooting oven! Make those villains pay for trespassing into Turtle territory! When the battle’s over, fire up the pizza oven and hang in the video game station with its flat screen TV. Or climb up to the street with a skateboard and shred the mini ramp! Includes 5 minifigures: Leonardo, Raphael, Master Splinter, Dark Ninja and a Foot Soldier. Price: $49.99 – MORE DETAILS & BUY HERE 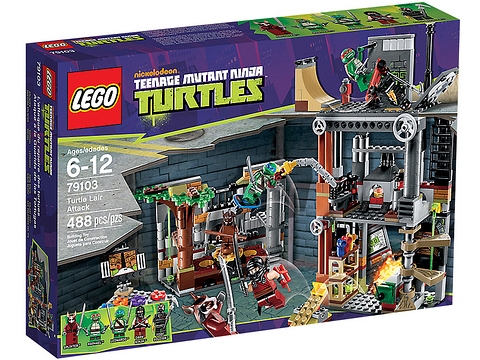 ➡ #79104 LEGO Teenage Mutant Ninja Turtles The Shellraiser Street Chase – Deliver turtle-powered justice to Dogpound with the Shellraiser! Dogpound is speeding through the city, making special deliveries of toxic ooze in his pizza delivery van. Hit the road with Leonardo and Michelangelo in the teched-out Shellraiser to stop that angry mutt! Turn the powerful LEGO® Technic shooting cannon 360 degrees and open fire! Unfold the Shellraiser’s side panels to reveal the computer workstation, weapons rack and skateboard! Take the pursuit off the streets and onto the railroad tracks by raising the rubber tires up to reveal track wheels! Once you’ve stopped Dogpound, battle on the rooftop against his minions: The Kraang and a Foot Soldier. Includes 3 minifigures: Leonardo, Michelangelo, a Foot Soldier, Dogpound and The Kraang. Price: $59.99 – SEE MORE DETAILS & BUY HERE 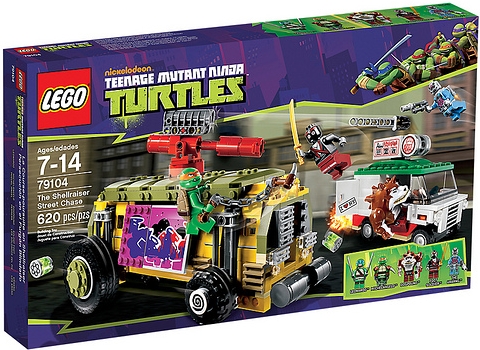 ➡ #79105 LEGO Teenage Mutant Ninja Turtles Baxter Robot – Attack with twice the turtle power to save April! When Baxter attacks the city with his massive mech suit, it’s time to take the turtle power to the sky…and the street! Fend off that heavy-metal menace with Donatello in the glider and Raphael in the go-kart! Stop him before he can snatch April with the mech’s shooting claw and reeling function. Dodge his 3 laser flick missiles and fire 2 of your own! Pull Baxter out of the opening cockpit to battle him and his mini Mouser robot using 2 sai and a bo staff. Save the day and skate away! Includes 4 minifigures: Donatello, Raphael, April, Baxter and Mouser mini robot. Price: $39.99 – SEE MORE DETAILS & BUY HERE 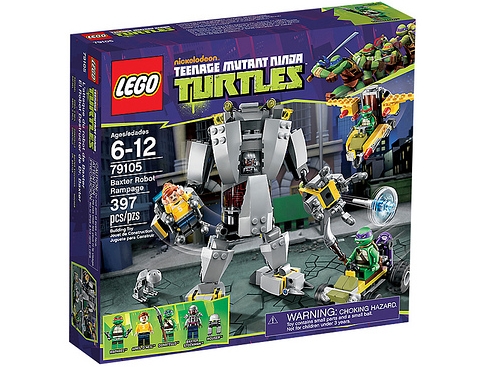 I know many old Teenage Mutant Ninja Turles fans are excited about this new LEGO theme, while others can’t relate much. Time will tell if this collaboration between LEGO and the TMNT franchise will work out on the long term. But at least we will get the six sets above, so if you are interested to collect the Turtles and other characters, this is your chance! (There is at least two versions of each of the Turtles in these sets.) 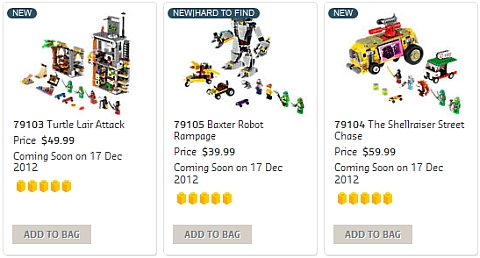 So what do you think? Will the LEGO Teenage Mutant Ninja Turtles theme be successful? Will you get the sets yourself? Would love to hear your opinion, so feel free to share in the comment section below! 🙂