by Thita (admin) on February 15, 2013
in Featured LEGO Creations

LEGO Steampunk was all the rage a few years ago. I remember LEGO blogs and picture-sharing sites were full of LEGO steampunk creations; fantastic, rustic looking machines with gold highlights and steamy engines, operated by bespectacled minifigures in top-hats. 😀 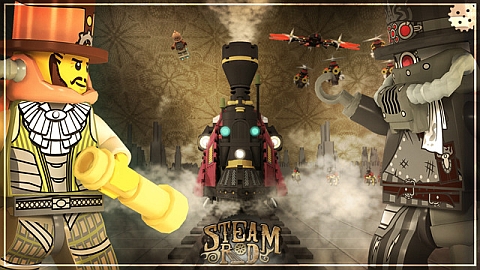 Since then the LEGO Steampunk fad had died down some, but there are still great steampunk creations from dedicated steampunk fans that I run across from time to time. One of these is this LEGO Steampunk project on CUUSOO called The Adventures of SteamRod. 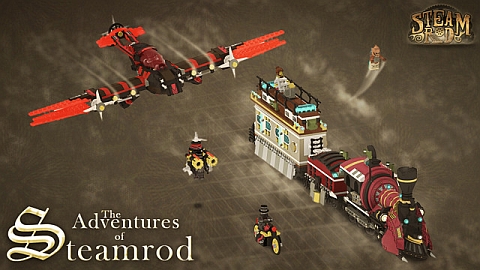 This LEGO project is created by a group of LEGO fans calling themselves Team Jigsaw. They felt that while LEGO has dabbled with Steampunk vehicles and minifigures in the past, there has never been a set or theme that has fully embraced the elegance and beauty of the genre. Out of nostalgia, they also wished to see the return of the legendary Johnny Thunder and his crew from yesteryear’s LEGO Adventurers theme. 😛

The Adventures of SteamRod is set in an alternate future where steam-powered technology never fell out of use, this CUUSOO project proposes an exciting set packed full of detailed vehicles and minifigures designed as a one-off tribute to Steampunk and LEGO Adventurers characters. This is a large set with seven unique minifigures included! 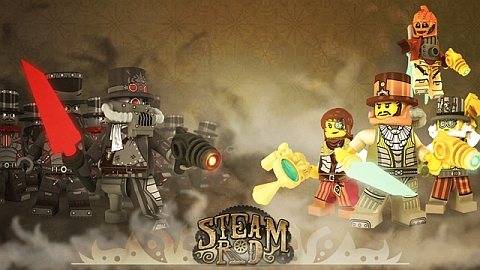 The LEGO CUUSOO Steampunk project includes the centerpiece SteamRod train, constructed from over 1,500 pieces and using many interesting building-techniques to achieve a classic steampunk look.  The SteamRod also features hidden flick-fire missiles, a secret coal-car compartment, and a fully detailed engine-room inside the locomotive. The Laboratory Carriage opens to reveal a fully detailed interior, with machine schematics, robots, golden tools, crystals, ancient artifacts and vials of obscure chemicals to keep Professor Articus occupied. (The professor is one of the good guys – although a bit crazy.) 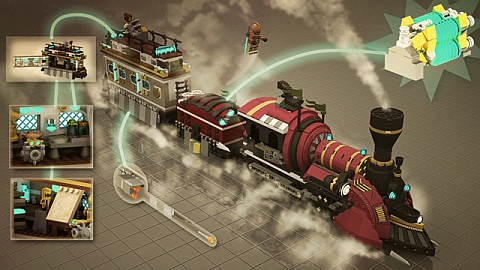 There is also a badguy, Lord Sinistree, who is attempting to steal the steam-engine of the train, which – according to the story – is an ancient, highly valued relic in itself. He is equipped with a prop-plane and aided in his mission by a couple of mechanical Slybots as henchmen. In fact, all of the characters have elaborate back-stories (see below). 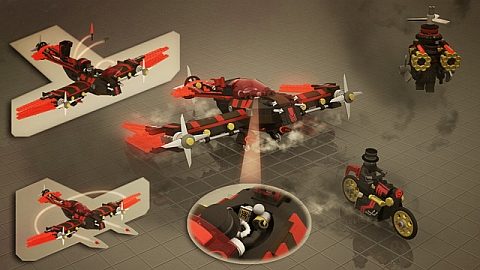 ➡ Lord Sinistree & Slybots: Selfish, bitter and disfigured from countless lost battles and schemes foiled by his arch-nemesis Sir Bolt, Lord Sinistree wishes to steal all the world’s valuable treasures and artifacts for himself. Helped by his clueless henchmen Slybots, the evil villain has created a plan to attack Sir Bolt’s train SteamRod, and steal away the ancient Steam Engine!

➡ Sir Jonathan Bolt: Distantly related to the famed adventurer Johnny Thunder, Sir Bolt has made it his mission to recover artifacts from long forgotten locations, and bring them into the light of day once again! Aided by his long-time companion and wife Abigail Stratus, Sir Bolt has made many friends, and a significantly larger number of enemies…

➡ Abigail Stratus: The headstrong and beautiful wife of Sir Jonathan Bolt, Abigail Stratus is the only reason Sir Bolt is alive. Pulling him from the depths of ancient temples and mystical machines is an often occurring event, and one that Ms. Stratus is not likely to let her husband forget. Abigail is the SteamRod crew’s weapons expert, favoring a stylish reticulated targeting eye-patch to help her never miss a target.

➡ Professor Archibald Articus: While deep in the jungles of Serenora, Sir Bolt stumbled upon a ramshackle hut which housed a bewhiskered and disheveled Professor Articus. After a quick spot of tea and a discussion on basic physics, Sir Bolt decided to recruit the slightly insane professor for his adventures around the globe. Nary a week goes by where the train SteamRod isn’t wracked by explosions and purpley smoke from the laboratory car. But nobody questions it, they merely smile and let the professor continue his experiments – most of which end up with fabulous results.

➡ Psi Clone R-1820: One of the first temples that Sir Bolt ever discovered contained the remnants of a long-forgotten robot civilization. Among the piles of greening copper torsos, a single entity remained. Lacking a voice box and the capacity for fear, the android immediately adopted Sir Bolt and Abigail Stratus and has remained a loyal companion and essential member of the crew ever since.

Pretty interesting, isn’t it? What do you think? If you would like to support this LEGO CUUSOO project please vote for it. Remember; LEGO projects on CUUSOO need 10,000 votes before LEGO would consider them for production. Voting is easy, just go here: VOTE FOR LEGO STEAMROD