Collecting LEGO polybags in Asia & beyond… 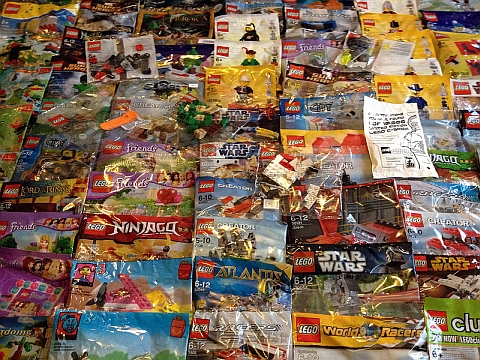 But first allow me to share how I got tangled in this LEGO polybag collecting business. I got my first LEGO polybag, the #30080 LEGO Ninjago Ninja Glider in 2011, not long after getting out of my Dark Ages. At that time I didn’t know any better and I tore open the packaging. Later my dad got me some LEGO polybags, but it was only after reading Brickset member atkinsar’s Confessions of a Serial LEGO Polybag Collector Part 1 and Part 2 when my curiosity was piqued. Only owning 5 LEGO polybags at that time I gave a shot at the competition mentioned at the end of Part 2 of the article. When the results came in I was surprised; my review had come in first place! So that how – for better or worse – I got into the hobby of collecting LEGO polybags and won two fairly rare LEGO polybags to boost my collection; the #30170 LEGO Heroica Ganrash and #30182 LEGO Santa.

If anyone asks which are my favorite LEGO polybags that I own, I’d probably answer them with these below; all 7 of the LEGO Shell-Ferrari promotions. Not bad, eh? One of the advantages of living Asia! My family and I picked them up at various Shell stations in Malaysia for 12 Malaysian Ringgits (or 6 USD) each, except for the 250 GT Berlinetta and the pit-crew; those I got for the steeper price of 10 USD.

So now, let’s start the LEGO polybag guide, shall we? As you might now already I’m from Indonesia, so mainly I’ll talk about the LEGO polybags available here as that’s the marketplace I’m familiar with. Unless you live in Hong Kong being a LEGO polybag collector is terribly difficult here. Well, actually being a LEGO fan in general is not easy, as LEGO sets tend to be at least 1.5-2 times more expensive than in the USA. Of course we have In’s Place, a true Asian LEGO paradise, (read: An Eastern LEGO Paradise in Hong Kong…), there are BricksWorld chains in Singapore, and we have LEGO communities such as BricksIndonesia. But still, LEGO sets are overpriced, and many sets never even make it to Asia. So it goes without saying that LEGO polybags such as the #30230 LEGO Galaxy Squad Mini Mech – which can easily be bought at Wal-Mart in the States – is difficult to find to say the least. This is why I am writing this post; to provide a little help for LEGO polybag collectors.

➡ LEGO POLYBAG PAPERMATE PROMOTIONS: It is highly debatable whether these are available solely in Indonesia or not. Nevertheless, it seems that PaperMate regularly runs LEGO promotions. I recall they have ever held a writing competition, with the 2010 LEGO Hero Factory heroes as the prize. In addition, their pens are often sold in bookstores such as Gramedia, packaged with LEGO polybags and impulse sets. Rather than show you all of them I’ll just link you to this BrickList I made detailing all the PaperMate LEGO polybag promotions. Last year, I heard they even offered a Shirtless Darth Maul polybag! Usually PaperMate packages the LEGO polybag with 3 pens; 1 red, 1 black, and 1 blue. Each package costs 45.000 IDR (4.5 USD) for polybags without minifigures, and a dollar more for polybags with minifigs. Below is an example: 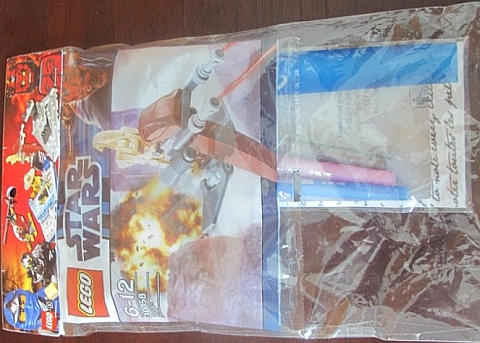 I would like to mention for those of you who are perfectionists that the outside packaging tab is stapled through the top of the polybag, so there will be two small stapler-marks on the LEGO polybag. Also, I should note that at least in my own experience, the pens dry up obnoxiously quickly. 🙁

➡ LEGO POLYBAGS AT IN’S PLACE: Never forget – and I mean never forget – to visit this place if you ever go to Hong Kong. One might call it a physical BrickLink. Legomaniac, who wrote the article I linked to above, stressed on the pure splendor of this place. Just to remind you again of its awesomeness here’s a picture from his post: 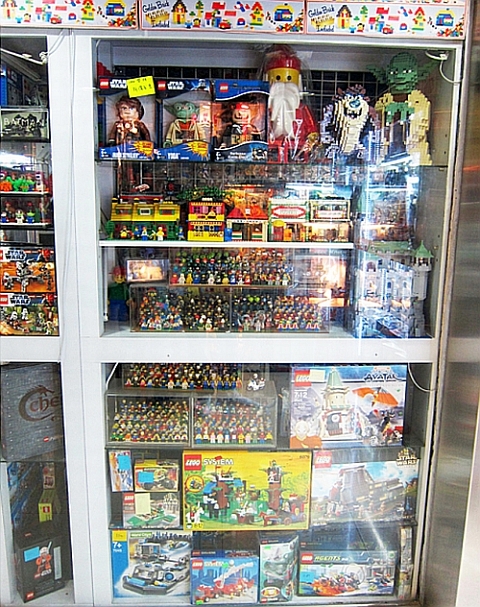 By the way, do you notice that LEGO Agents set at the corner? I didn’t take this picture, but my dad bought me that same set from one of his trips here. I wonder if the one he got me is coincidentally the same set pictured here? 😀

But now, let’s get back to the topic, Legomaniac didn’t tell you about the LEGO polybags you could find here. I’ve never been here before in my life, but this is what my dad bought me once: #30013 LEGO City Police Buggy and #30090 LEGO Pharaoh’s Quest Desert Glider. Each for 3 USD. Not too shabby, eh? Who knows what other LEGO polybags could be found?

➡ LEGO POLYBAGS AT LEGOLAND MALAYSIA: this is also not a bad place to buy LEGO polybags. I visited here last year for vacation and found a few polybags. I didn’t take pictures while I was there, but I can give you a list of the LEGO polybags you could find: #40010 LEGO Santa with Sleigh Building Set, #40034 LEGO Christmas Train and #40035 LEGO Christmas Rocking Horse. These are all Christmas-themed, and of course we also have Halloween: #40020 LEGO Halloween Set and #40032 LEGO Halloween Witch. Strangely, we have this sort of out of place Thanksgiving LEGO polybag as well: #40033 LEGO Thanksgiving Turkey. These are all LEGO holiday exclusives so they are really hard to find otherwise. 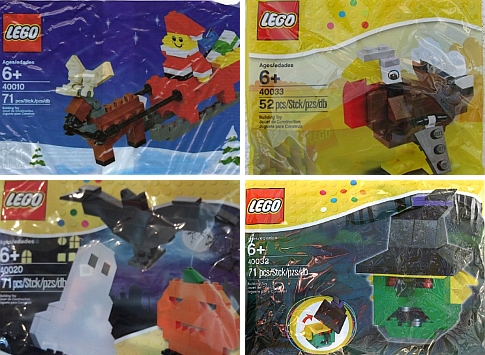 There are also downsides of shopping at LEGOLAND Malaysia. The above LEGO polybags costs 24 Ringgits each, or 6 USD, which is a bit steep. And don’t forget about the costly entry to LEGOLAND, 140 RM (45 USD) for adults and 110 RM (35 USD) for children and seniors. These prices are of course not worth paying just to get a polybag, but if you happen to be vacationing there you may want to hunt for some LEGO polybags as well. Please note that online booking is cheaper.

So these are some of the places I would recommend if you would like to get into LEGO polybag collecting. If you are at other locations besides Asia, look for LEGO polybags at stores that already sell LEGO. They are often in the seasonal section or at the checkouts. You can also find them at odd places like grocery-stores, gift shops, etc. Half of the fun of collecting LEGO polybags is the trill of the hunt! And if you do find them it is worth picking up a few extras as they are great for trading with other LEGO collectors.

As I mentioned in my previous posts, I’m a TFOL (Teen-Fan-of LEGO) and this is my third article here at theBrickBlogger. Questions, comments and feedback are welcome! Please share below! 😉