One of the most interesting recent LEGO themes is LEGO Galaxy Squad. The basic story line is four color coded teams of heroes along with their robot side-kicks are fighting giant alien space-bugs. Nothing particularly innovative there, however what is really interesting is the space-vehicles themselves; both on the bug side and the human side. I know that some LEGO fans are totally into the Galaxy Squad bug fighters, and some who are into the human vehicles, so there is something for everyone. 🙂 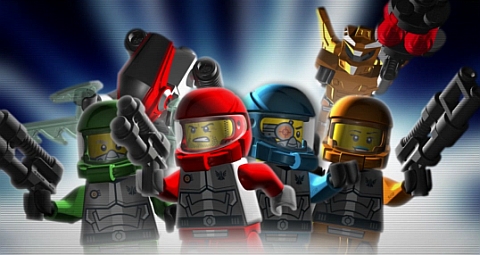 The second wave of LEGO Galaxy Squad is going to be released this summer. We have talked about the sets before as they were revealed at the Toy Fairs earlier this year, however recently official set images became available through Brickset and other online LEGO sites, so I thought to share them with you here.

➡ #70706 LEGO Galaxy Squad Crater Creeper: this is the smallest set in the second wave of LEGO Galaxy Squad. A solid, medium-size bug vehicle with an alien buggoid, plus a member of the Green Team with a tiny hovercraft. I really like the colors of the bug-vehicles. The lime-green, dark-red and black with an occasional splash of dark-tan and trans-purple works wonderfully!  Included are 171 pieces and 2 minifigs. PRICE $19.99 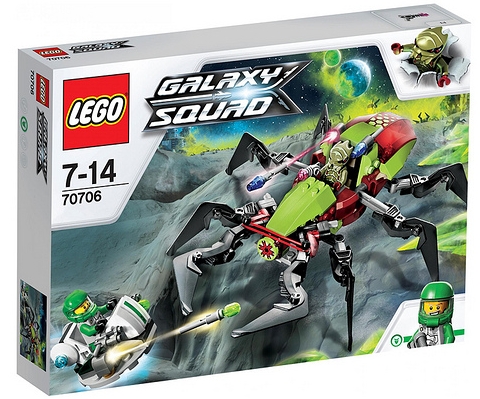 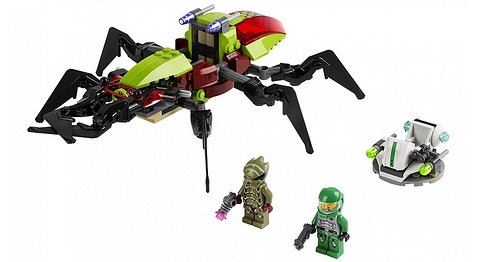 ➡ #70707 LEGO Galaxy Squad Eradicator Mech: this is one awesome mech with the ability to split into two sections; a slightly different mech and a small space-ship. A member of the Orange Team as well as his robot side-kick are also included. Plus two space-bugs – I guess these are robots as there are no drivers. I’m a big fan of the LEGO Galaxy Squad Orange Team. The #70705 LEGO Galaxy Squad Bug Obliterator is one of my all-time favorite sets. It was a pleasure to build, and I have been having fun customizing mine to perfection. So I’m particularly looking forward to the Eradicator Mech.  In fact, I can hardly wait! Included are 440 pieces and 2 minifigs. PRICE: $39.99 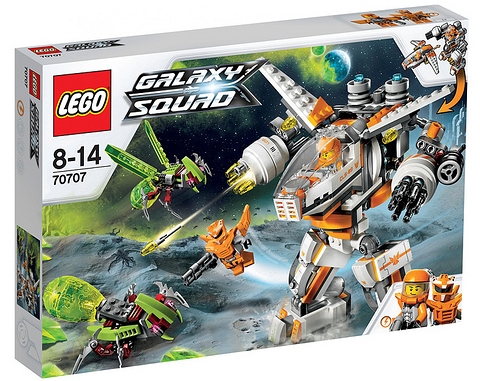 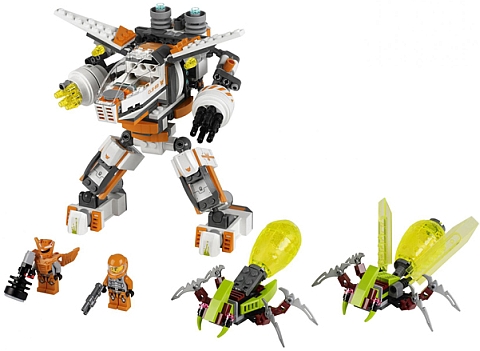 ➡ #70708 LEGO Galaxy Squad Hive Crawler: if you are on the side of the alien bugs this is definitely the ultimate set! This bug-tank, Buggoid Queen – or whatever you want to call it – is one of the most innovative LEGO sets I have seen. Also, the legs move as you push it along, making it look more menacing. The set comes with one buggoid, two little creepy-crawlies (one is a winged bug, the other looks like a scorpion). The poor Red Team guy and his robot sidekick with their small speeder will have no chance! By the way, I find it interesting that the Red Team has been completely neglected in both waves of LEGO Galaxy Squad. All the other teams have awesome vehicles, while the Red Team only have two tiny speeders. Perhaps this indicates that there will be a third wave of LEGO Galaxy Squad where the Red Team will be prominent? What do you think? Included are 560 pieces and 3 minifigs. PRICE: $49.99 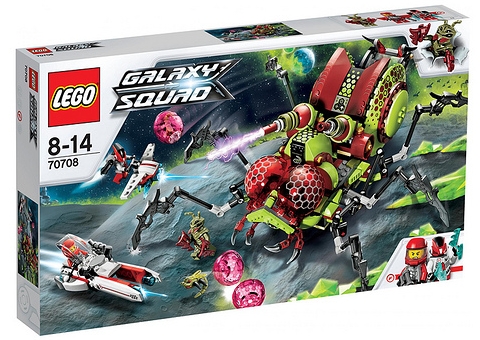 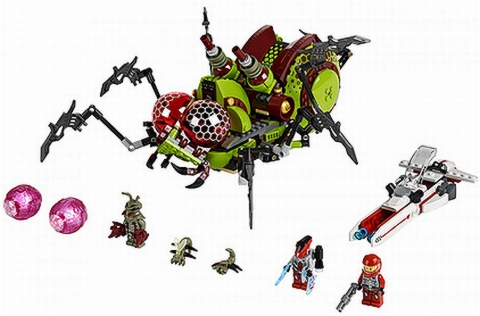 ➡ #70709 LEGO Galaxy Squad Galactic Titan: this is the largest of all of the LEGO Galaxy Squad sets released so far, and a worthy match of the Hive Crawler. The Blue Team’s awesome tank/space-craft combo comes with all kinds of cool features and ways to transform. Two Blue Team minifigs as well as their robot side-kick are included on the human side. On the side of the bugs there is an interesting little alien-bug station, a centipede-like crawling bug, two bugoids, and one small winged buggy. Included are 1012 pieces and 5 minifigs. PRICE: $99.99 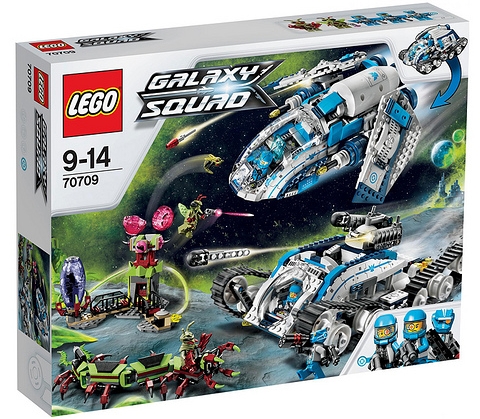 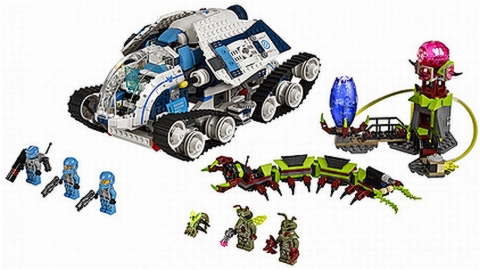 What do you think? Are you a fan of the LEGO Galaxy Squad sets? Which side do you like better? The human team with their awesome vehicles, ships, and robots, or the bugs with their totally radical giant bug fighters? And which LEGO Galaxy Squad summer set are you looking forward to the most? Feel free to share your thoughts in the comment section below! 😉