by Thita (admin) on April 7, 2013
in Featured LEGO Creations

As you probably know from my first article on collecting LEGO videos I’m an avid video collector, with an ever-expanding archive filled with over 500 LEGO videos. From now on I’m hoping to write a monthly segment where I will bring to your attention interesting LEGO videos that I find in that particular month. In this case that would be March 2013. 🙂

March has been a busy month in terms of LEGO videos. The Official LEGO YouTube Channel alone posted more than 20 new videos. Most are old commercials, but there are also some gems that are worth watching. I will share with you my top picks and also close seconds (and the reason why I think they didn’t get to first place). Hope you enjoy! 😛

I would like to add that I’m a fairly strict purist with my LEGO collection (meaning I only use LEGO bricks without mixing in other brands), and I’m just as strict with videos. Only very few unofficial LEGO videos make it into my archive. Some ends up there because I simply can’t tell if a video was officially released by LEGO or not. So please, don’t expect to see a lot of third-party videos in these sessions – except maybe when not much is coming out directly from LEGO in a particular month.

As a second note I would like to mention that some of the LEGO videos I will feature here are not necessarily new. They may have been originally released a few years back, but I have only recently found them or had time to download them. I’ll try to keep these to a minimum – unless they’re super amusing or very nostalgic. I will be categorizing LEGO videos in three categories and giving out 4 awards:

➡ The LEGO Stop-Motion Animation award goes to the Brick-A-Brack Bunch in Operation: Egg Drop. For those unfamiliar, the Brick-A-Brack Bunch is a series of short and funny LEGO videos. Part of the charm of this particular segment is the ingenious usage of LEGO pieces. The playground was well done, and using 1×1 cylindrical bricks as Easter-eggs is great. The bunny-hut may be rather bland, but what it does have is top-notch. And the best part is the carrot-vehicle. The opening secret-door is also awesome. But someone please tell me – since I don’t celebrate Easter – what does the 1×1 cheese-slope on top of the 1×2 slope was meant to resemble? 😕

The runner-up in this category would be another LEGO video involving the Brick-A-Brack Bunch. This one is called More Than You Toboggan’d For. I really like the design of the toboggans. They are simple, and it works – especially the one used by the guy on the satellite-dish. The boat-like toboggan with the massive afterburner is pure overkill – in a fun way of course. The sole reason why this video didn’t make it to first place is because of the lousy timing. It would have been much, much better for this to be posted during the winter. You can watch the video here. 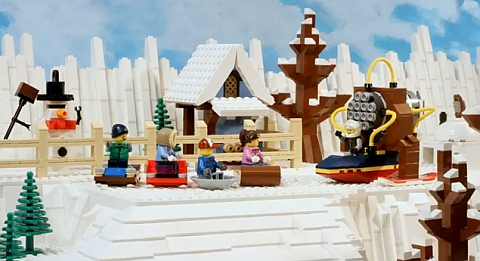 ➡ The LEGO CGI Video award goes to the Galaxy Squad Mood Video. I like the fact that it is delivered as a mission-brief. I also like that the narrator has a cliche “drill sergeant” voice. The voice makes the phrase “and really fancy math” – which he uses to describe the Blue Team – all the more amusing. The video describes the teams well. Without it I doubt I would have figured out that the Red Team were the speedy ones, the Blue Team were tech-savvy, the Green Team were the heavy-artillery and the Orange Team were the front liners. Well, I might have figured out the Red Team on my own; after all who charges into battle with nothing more than a speeder? All in all, it’s a good, educational video that will tempt you to buy the sets. 🙄

Close second is the Hero Factory Episode 10 – Brain Attack, which is also nice story-wise, especially if you’re into buildable figures, like I am. Its shortcoming is the fact that it’s so cliche-ridden. A hero turning evil against his will (Surge). A deadly enemy that was defeated only after the main character strengthtens itself. Many people have compared the Brains to the Xenocytes from the Ben 10 series. Personally, I kind of like it, but the below picture drew up my conclusion to give it second place: yes, that sorry mass of red and grey pixels is supposed to be Furno XL. This is one of the poorest graphics I’ve ever seen. I was hoping LEGO will post better versions, but I didn’t find any at the time of writing. You can watch the video here. 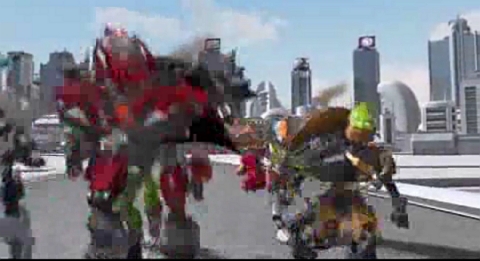 ➡ The Other LEGO Videos award goes to LEGO Blocumentary – From Inspiration to Creation: Angus MacLane.  Ever since watching the trailer for Season 2 of Blocumentary, I’ve been looking forward to this video, in part due to wanting to see Angus MacLane’s LEGO-room. I sure did get to see it! I was slightly disappointed that the main focus wasn’t on the LEGO Cube Dudes, but seeing the Luke and Wampa scene and the door from Monster Inc. more than makes up for it! I’m looking forward to the next Blocumentary session for sure!

The second winner in this category is (remember? there were two winners in this category!) LEGO Micro Square episode 11. I like this episode since it’s discusses Easter-eggs, which coincides with the fact that this video was published around Easter (with Easter-eggs having a fun double meaning). You’ve got to admit, the LEGO Master Builders really outdid themselves. An entire sewage system? A lava flow? Great job there! Not sure how easy it is to follow this tip though; but if you can, it would make a very good LEGO micro-build!

Close second (or… third) is the video about LEGO Architecture at LEGO World Copenhagen. You will notice some really nice usage of LEGO pieces. The quote from Frank Lloyd Wright is a nice touch. The reason I didn’t give this video first place is the lack of narration. It would have been much more engaging. Also, I was never attracted to the LEGO Architecture series, and these are my choices (sorry, not trying to be ego-centric, just honest). You can watch the video here. 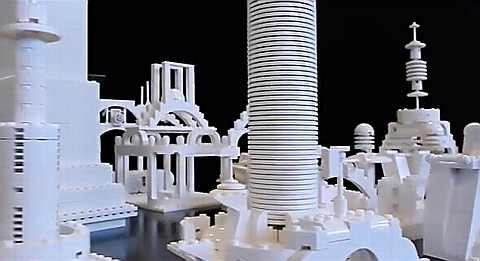 Like I said; March had a lot of new LEGO videos. Although most of the videos released this month were product advertisements and trailers, as you can see there were also some nice gems. Other LEGO videos worth mentioning includes the LEGO City Museum Heist mini-movie, the second Yoda Chronicles mini-movie and the LEGO Technic Behind the Scenes session with the making of the pull-back motor cars commercial. Also the LEGO Chima Speedorz video about how to play the second wave of Speedorz sets was okay, if only the graphics were better…

So that is the LEGO videos round-up for March. What do you think? How did you like the videos I mentioned here? Do you have your own favorites? Feel free to share and discuss in the comment section below, and stay tuned for next month’s picks! 😉

As I mentioned in my previous posts, I’m a TFOL (Teen-Fan-of LEGO) and this is my fourth article here at theBrickBlogger. See previous articles: