Following the trend of my previous articles on collecting LEGO related materials (see links at the end of this post on collecting LEGO videos, instructions, and polybags), today I would like to tell you about something else I collect; LEGO books. Even as child I always loved reading. Sure, back then it tended to be translated Japanese Manga or comics, but since I entered secondary-school and had access to a bigger library I’ve been reading up on novels, contemporary and (condensed) classics.

So it comes to no surprise that LEGO books are something I like. Technically speaking, the first LEGO book I got was the Bionicle Annual and the junior novel Bionicle Legends #11: The Final Battle. And when I got back into the LEGO hobby after a brief absence, the first book I got was the LEGO Exo-Force junior novel, Escape from Sentai Mountain and Bionicle Adventures 3 – Legends of Metru Nui –  both from a book-sale. Sadly, the first two books got lost, and the last two gone missing. Hopefully they are in a box somewhere from my most recent moving,  but I fear the worst…

So let’s talk about picture quality of the LEGO books by DK Publishing. All I can say is that they’re excellent and vibrant. Some are CGI or have been digitally altered to some extent, but not too radically to make them very different from the real thing. After all I don’t believe anyone is going to think the Harry Potter’s wand really shines with magic, like on the book cover above. And I suppose that picture of Kai leaping is CGI from the box-art of the #2258 LEGO Ninjago Ninja Ambush set, but it’s quite minimal and is still able to pass as a real picture. 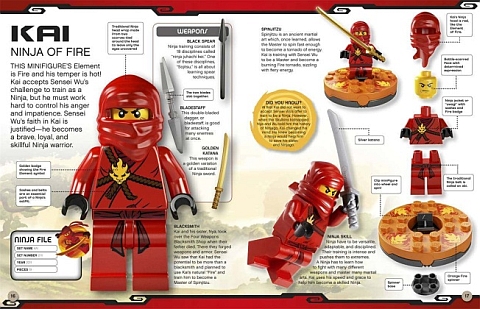 Now let’s talk about the exclusive minifigures. If you own any of the LEGO books by DK Publishing – or at least seen one – you know that usually there is a unique LEGO minifigure inside the book’s front cover. When I got my LEGO Star Wars Character Encyclopedia, it just simply stated Exclusive Minifigure – Han Solo. It didn’t even say why it was exclusive. I was like, “What’s so special about a Han Solo?” Only later did I learn that it was a Yavin Ceremony Han Solo that only appeared in this particular LEGO book. This problem of vagueness has been fixed in later books though; now all the books state the variants clearly, like Electro-Suit Batman. Well, technically speaking there is an exception; the LEGO Ninjago Character Encyclopedia exclusive Lloyd only said Lloyd ZX. This was probably to not giveaway too much of the 2013 storyline. These exclusive LEGO book minifigures are highly collectible and can fetch a pretty price on the secondary market, often costing more than the book! 🙄

By now you might be thinking to yourself, “These are awesome! But where, oh where, can I possibly buy these LEGO books?” Well, to quote one of my favorite TV characters, it’s “Available wherever awesome books are sold.” Just kidding of course. Amazon.com is a good option. Their prices are excellent, and they offer free shipping for orders over $25. If you do plan to buy any of the LEGO books I mentioned, please use the links found here; not only are you buying a book for yourself, you are also helping to pay the expenses of this website. 🙂

And of course you can also look for these LEGO books at your local book-stores. Some stores my not carry them as minifigure-thieves love to steal the exclusive figures included. If one of your local stores do carry LEGO books by DK Publishing, here’s are a couple of quick tips – especially if you live in places where overpriced LEGO sets reign with an iron fist:

In the final segment of this article let’s look forward to the future. These pictures from the DK Publishing catalog show some LEGO books coming. Just look! There is the LEGO Minifigures Character Encyclopedia we talked about before, two LEGO BrickMaster books (one LEGO Legends of Chima and the other LEGO Stars) and The Yoda Chronicles! The highlight for me though is undoubtedly The LEGO Playbook – seemingly a sequel to The LEGO Ideas Book, and the LEGO Minifigure Year by Year book. As far as I can tell it will come with not one but three exclusive minifigures. This is an awesome year for LEGO books! I can’t wait! 😛 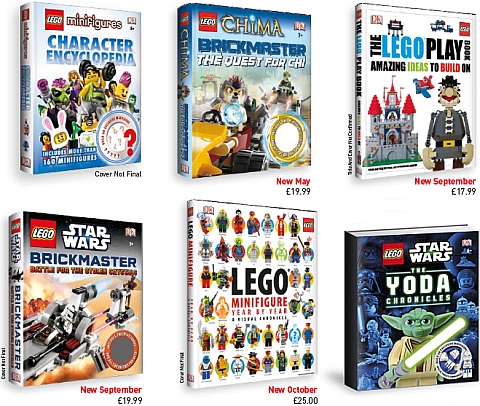 Besides the LEGO books by DK Publishing mentioned above there are also a trove of other LEGO books such as Hero Factory novels, sequels to last year’s Phantom Menace book and much more. In fact, I recommend you to check out this PDF file of the DK Books Catalog: LEGO Books Coming PDF

To summarize; LEGO books are something great to collect. They offer great ideas and inspiration for building LEGO models, helps collectors keep track of their LEGO collection, and encourages young LEGO fans to read more. Also, I’m in a review-y mood, so please leave a comment voting on which book from the picture below I should review, as these are the books I personally have and can show you in detail. 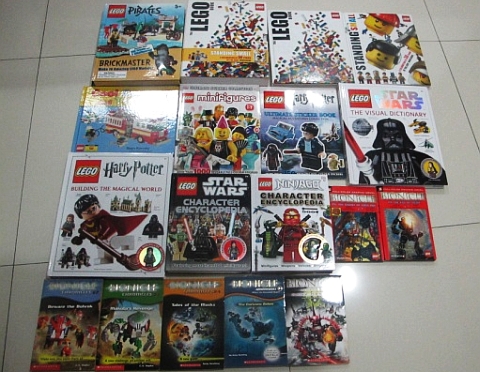 Also, I’m a TFOL (Teen-Fan-of-LEGO) and this is my 5th article here at theBrickBlogger, please see the links below to my previous articles. And in case you are wondering why my name is not on the Contributors list yet, it’s because my Contributor’s bio is so lengthy (and awesome!) that it’s taking this long for admin to edit it! It’s a new record! 😀