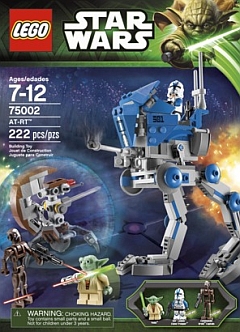 In this Brick Breakdown series I review official LEGO sets, from the perspective of looking at interesting building techniques we can all learn from. Today we will be looking at one of the smaller LEGO Star Wars sets, the #75002 LEGO Star Wars AT-RT. You can also check out the previously discussed LEGO building techniques at the end of this article. So let’s begin and see what kind of learning experiences the AT-RT has to offer! 🙂

Ah, the 501st! Darth Vader’s own personal legion of soldiers! The 501st Legion, also known as the 501 or 501st Battalion during the Clone Wars, and later known as Vader’s Fist and the Five Hundred and First, was an elite unit of clone-troopers commissioned by Supreme Chancellor Palpatine during the Clone Wars that later became a stormtrooper unit. Seeing this legion made in LEGO is a dream-come-true for LEGO Star Wars fans! 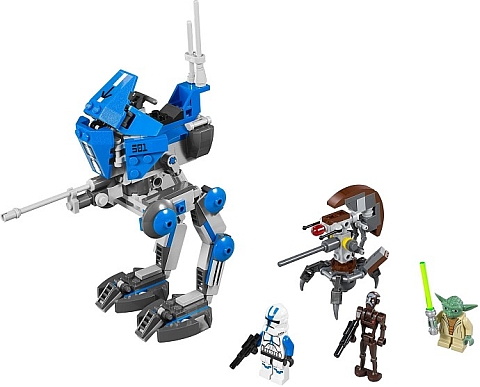 At first, I was not planning to write about this LEGO Star Wars set – not because it isn’t cool, but because the LEGO building techniques are fairly straightforward. And some of the more unique LEGO building techniques have been discussed in previous Brick Breakdown segments. Fortunately I gave it some time and took a second look, realizing this set has two interesting LEGO techniques regarding the balancing of the model.

The first thing you notice when you see the LEGO Star Wars AT-RT is that the bulk of the model is up top; that’s where the minifigure goes, the shielding is located, all the guns are, etc. It is also where the model has all its weight. Studying basic physics we know that the higher the center of gravity the easier it is to get knocked down. This means careful consideration needs to go into how to balance a LEGO model that is top-heavy. In this case LEGO has decided to put the feet directly underneath the top section. 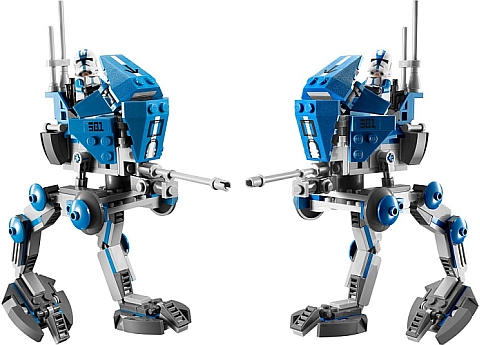 It should be noted that this decision was not entirely LEGO’s to make. The LEGO Star Wars AT-RT is a licensed set, which means they have to recreate models that were designed by another company. In terms of building, central footing is an option, but it comes at a cost; you may note that you can not bend the legs forward on the AT-RT and bending them back can get precarious. The issue lies with the inherent problem with center balancing; it does not provide much ability for movement without the need of some serious counter-balancing.

In terms of an aesthetic approach, center balancing can look absolutely amazing. In terms of functionality, there may be a few problems when trying to move the model around as we discussed above. As long as you consider this issue in your design you shouldn’t have too many problems.

The other section of the LEGO Star Wars AT-RT set that requires actual building is the sniper Droideka. Unlike the AT-RT, its feet are located mainly on the outside. Note how the feet narrow down to tiny points. This is the first major advantage of external balancing; you don’t need large feet. The idea is that multiple feet create a two dimensional surface. The fewest number of feet that are used for this is typically three since they form a triangle. 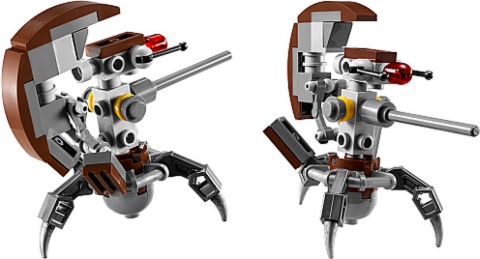 Here is a simple way to see if your model will balance well: put your LEGO model on a piece of paper. Then draw lines from foot to nearest foot. This should create a shape. In the case of the Droideka it is a triangle. Now see if the main body of your LEGO model is inside the shape when you look at it from above. If it fits inside the shape, things are looking good. If your model’s main mass is close to the center of the shape, things are balanced even better. In the case of the Droideka, a few things stick out beyond its footprint. This is why, despite having an external balancing support system, it remains a bit wobbly on its legs.

Central balancing is definitely not for every LEGO creation. Ideally it works well for LEGO models you don’t plan to move much. For example, a tree or a spaceship designed for display. It is definitely a technique that does not stand up well to heavy play. Of course, if your design is supposed to fall down, you may want to use it. 🙄

External balancing of LEGO models is a tremendously cool technique, provided you are not afraid of a little geometry. It is often found in the insect and spider designs LEGO has put out over the years. It is hard to mess this technique up, but can happen if you are not paying attention to the basic rules we discussed. The real issue with this technique is whether or not the legs you use can handle the weight of the model.

Finally, it should be noted the one LEGO balancing technique not covered here is when supports are used underneath the corners of a model, like stilts on a house. That technique is a mixture of both central and external balancing. Examples would include four legged tables, vehicles with wheels, and porches. It is the simplest balancing technique to use, unlike the methods used in the LEGO Star Wars AT-RT. 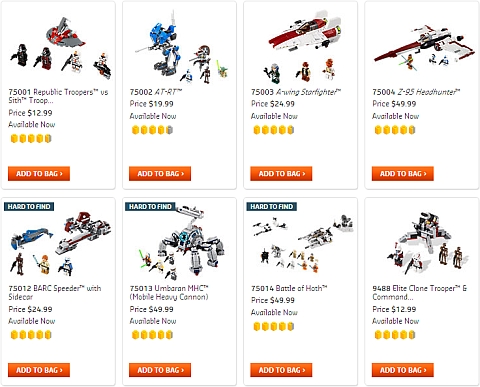 So how do you like the balancing techniques discussed here? Have you tried using similar techniques in your own LEGO creations? Feel free to share your thoughts in the comment section below! 😉

Next post: How to make your own Iron Man minifigures