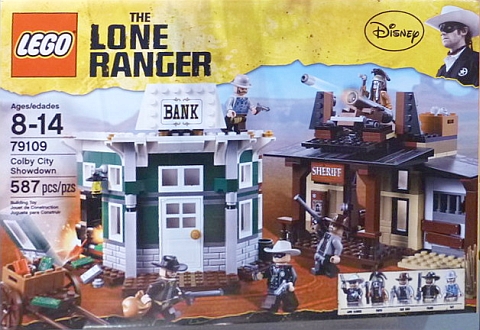 It’s time to ride into town and have ourselves a little gun fight! Sadly, the LEGO Lone Ranger Colby City Showdown town is not as epic as the LEGO Modular Western Town on CUUSOO, but for the price you get some fairly nice Western-style buildings. If you have been following this Brick Breakdown series, you might recognize the wedge and hinge technique found in the bank’s design. This particular LEGO technique fascinates me every time I see it in a LEGO building. I think it’s because it requires the technique to be a core component of the building’s foundation. And when this happens, eventually you’ll need to face some tricky design issues when you reach the top. But I digress. The LEGO Lone Ranger Colby City Showdown is a new set so let’s look at some new LEGO techniques!

A tried and true action element in LEGO’s bag-of-tricks is the exploding wall. You tend to find this whenever and wherever there are prisons or vaults of money. And in the LEGO Colby City Showdown set we have not one but two walls that explode! So let’s look at the finer points of what makes a good exploding wall.

Rule number one; the wall must be solidly built. It’s okay to have an oddly angled tile or fancy window, just so long as the wall will hold together. Remember, this section will be exposed to a bit of force. It becomes a lot less fun if you have to rebuild twenty some odd pieces every time you blow it up. Yes, it supposed to explode, but in a strategic manner. 🙄

Rule number two; reduce friction wherever you can. Tiles on the tops of walls and on the floor are almost always used for this technique to create a smooth surface. And when you still need a stud to hold everything together before the explosion usually LEGO jumper-plates are employed. This is because one stud has less friction than two studs.

Rule number three; centralize your trigger, if possible. This may mean the center of the wall, the top middle, or bottom middle. Since the idea is to move the entire wall away, a central trigger point is the best way to get the entire wall moving at the same time.

Rule number four; place the trigger as close to the points where the wall is still connected to the rest of the structure. Looking at the LEGO Colby City Showdown set, the prison uses a LEGO Technic-pin connection. (Note that the pin used is the frictionless kind – to reduce friction.) This is often a tough connection to break, however the plunger that is the trigger is right above the pin connection. This is all about using applied force efficiently. 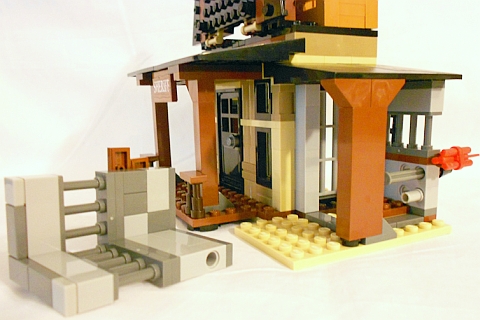 Rule number five; whatever your trigger is, make sure it uses a smooth surface. The last thing you need after something is triggered is for the trigger to catch and hold what you want launched. In the LEGO Colby City set in the bank a small rounded lift-arm is used, while the prison has a flat ended axle. Both LEGO elements discourage anything from getting caught.

Rule number six; make sure you provide an easy way to reinstall the exploded wall. Look at the bank-vault wall. It features mini slopes on the top so it they catch when placing the wall section back into the building, and the window-ledge makes a perfect way to press it down onto the jumper studs. 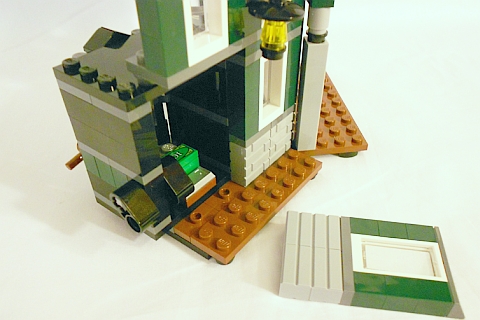 In short, if you are having problems with your own exploding LEGO wall take a look at these rules. It is possible that your LEGO model could be improved by following one or more of these rules. Oh, and just to cover all the bases; make sure there is enough clearance for your wall to be blown away.

At the LEGO Lord of the Rings Battle of Helm’s Deep set we reviewed previously (see link at the end of this post), LEGO left the joints of the hinges exposed. This is because it partially added to the rugged design of the model. However, you may want to get a bit fancier to match something not as medieval. The face of the bank in a Western town like Colby City is a perfect example of something that needs a more modern look. LEGO builders who have played around with angling their elements know that the gaps the angles create can look a bit unsightly. However pillars in front of these openings make a world of difference. 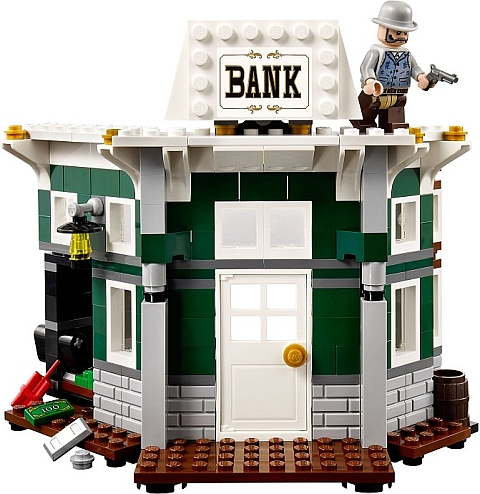 Notice how the pillars in front of the LEGO Colby City bank-building manage to transform the curved design into a seamless piece of architecture. Those familiar with LEGO Ninjago might remember seeing this technique used in Garmadon’s Dark Fortress. The only trick with using this technique is finding the right stud that lines up with the joint and the ability to attach it back to the building up top. This is absolutely the simplest way to overcome gaps created by LEGO hinges, and make LEGO models you create look professional. Of course, you will still have to deal with the challenges of making a convincing roof, but since the LEGO Colby City bank doesn’t really have a roof we won’t talk about that here.

Exploding LEGO walls are often overlooked as being simple designs. But when you get right down to it, they have a lot of elements that have to work together. And I didn’t even cover the fact that these elements need a frame so that other parts of the model don’t collapse. Honestly, exploding anything can be a clever action feature in any LEGO model, and it is something not many LEGO fans fully explore. I would recommend experimenting with this LEGO technique in your current LEGO creations and also play with it to discover new applications.

Calling putting a pillar in front of a joint a LEGO technique is a bit of a stretch. The thing though is that it represents an answer to a building problem that many LEGO fans face when building their own LEGO creations. What do I do about these gaps in my walls? Using a pillar has proven to be an efficient and stylish problem-solver. It also typically has the advantage of being slightly rotated. This not only gives you more angles to work with, but it provides a transition-step for blending angled walls. This concept does not have to stay with LEGO buildings only. Space-ships, cars, boats, trains, and anything else you build will on occasion have a joint-gap. In these cases like this you’ll need to construct some kind of a pillar to cover it. This is often done with the use of bars and clips to mount them over the gaps. You could also experiment with flexible LEGO tubing or beefing up bars with hollow bricks. It may be a lot of work, but it definitely gets good results.

So what do you think? How do you like the LEGO building techniques discussed here? Have you tried building exploding features into your LEGO creations? And how about dealing with covering up gaps created by hinge-building techniques? Feel free to share your own experiences, tips or ask questions in the comment section below! 😉