In this Brick Breakdown series I review official LEGO sets, from the perspective of looking at interesting building techniques we can all learn from. Today we will be looking at one of the LEGO Ninjago sets, the #70505 LEGO Ninjago Temple of Light. You can also check out the previously discussed LEGO building techniques found in official LEGO sets at the end of this article. 🙂 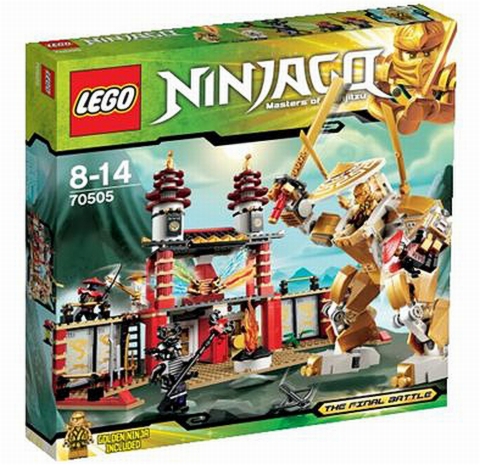 No matter what you think of the LEGO Ninjago Temple of Light set, one of its major selling points is the minifigures. From the four-armed Garmadon to the extremely cool Gold Ninja, it definitely comes with memorable and iconic characters from the LEGO Ninjago story. On top of that there is a whole range of pearl-gold LEGO elements that few LEGO sets can even come close to matching. 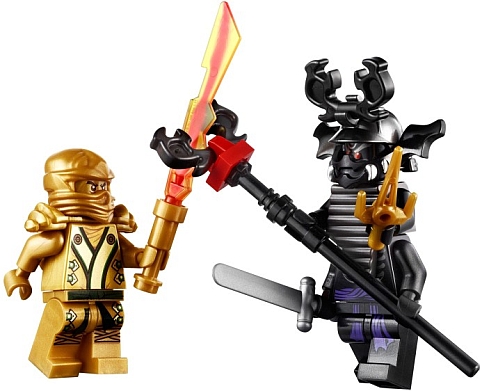 As for difficulty in building the LEGO Ninjago Temple of Light set, it is a rather simple LEGO model to build. This is not to say it doesn’t have good building techniques, rather the level of intricate detail is not as complex as other LEGO sets at the same price point. And as far as the LEGO building-techniques used, we’re going to examine two prominently displayed techniques in this set. The first is Open Dynamic Setting, followed by Building in Humanoid Proportions. So let’s begin!

One key feature of the LEGO Ninjago Temple of Light design is its open setting. By that I mean everything is front-facing, things can easily be accessed, and it has a minimal roof. Many LEGO sets of this size use an interior/exterior setting. This is where one side of the LEGO model features the outside of a building while the reverse has the inside. This makes the model attractive no matter which way you look at it. An open setting on the other hand will often not look so great from specific angles. The LEGO Ninjago Temple of Light set has managed this fairly well, but it doesn’t look spectacular from the back. The main reason why you’d design in an open setting is for the expansive play-area. You will end up with twice the room as other LEGO models since all your efforts are going into one side. 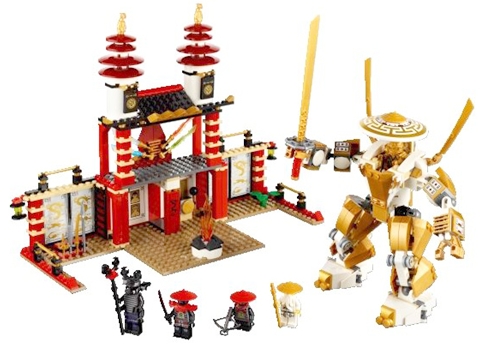 Now we move into the dynamic portion of the technique. This involves the LEGO hinges that allow you to open and close the sides of the building. This offers a much greater range of settings when you play with the model without demanding anything to be rebuilt. LEGO demonstrates that the LEGO Ninjago Temple of Light can be played in the open setting or the closed version. However, you don’t need to stop there; you can have one side open while the other is closed, or better yet, you can angle the walls to form unconventional wall placement. 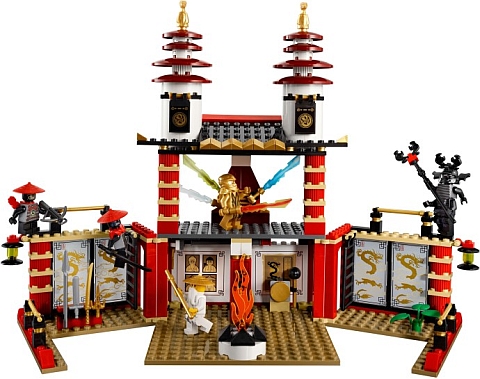 If you plan to use this technique, it is fairly simple. For the dynamic portion make sure you use hinges that are reinforced at the top and bottom of your walls. Also make sure it looks good no matter if it is open or closed. And finally, make sure nothing is in the way of the hinge’s movements. As for using an open setting, you will probably not want a front wall. If you do build up anything tall, make sure that structure is in the back of your creation. Generally consider it the stage of a play and you will not run into many problems visualizing your model.

➡ BUILDING WITH LEGO IN HUMANOID PROPORTIONS

Mech designs in general will typically follow a humanoid shape. In regards to building with LEGO, given the human shape as a base for designing LEGO mech models we will want to discuss how we can keep things in proportion and thus make our mechs look great. We’ll use the Gold Mech in the LEGO Ninjago Temple of Light set as our example. 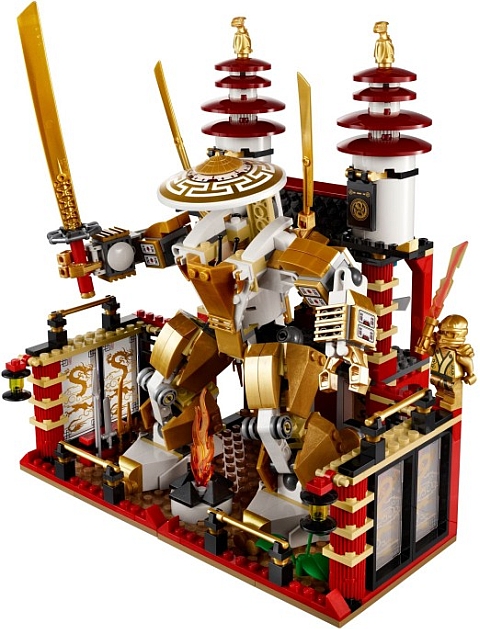 Let’s start by determining the major sections of the mech. We have the head and torso, which are commonly built together as a single section – in other words, don’t worry about making a neck. Next we have the right and left arms. Occasionally there may be minor differences, but their weights should be fairly close to one another. Next we have legs. There are rarely differences between legs other than being built as mirror reflections. That’s because we’re getting into the balancing of the mech, which is something that is not lightly messed with. Finally, we have the feet. This is usually the one major element that doesn’t fit with the humanoid design very well. They tend to be as long front to back as the mech is thick, and wider than the legs. 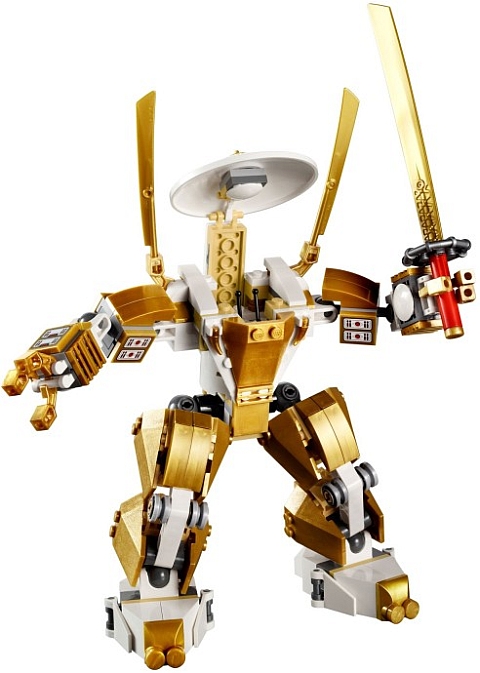 With these major elements identified, let’s talk about a few measurements you’ll want to keep in mind. They don’t have to be followed exactly, but they will give you the most humanly proportioned mech that won’t look weird to those seeing it for the first time. First, the foot and leg together should be just as tall as the torso and head section. A mech gets half its height from the legs. As for the torso, the shoulder connector-points should be a bit further out than where the legs connect into the torso. When in minifigure scale, these connection-points should be anywhere between one and two studs further out than the hips. Moving to the arms, the elbow should reach only halfway down the torso, and if it raises its arm up the elbow should be roughly equal to the top of the mech’s head. As for the rest of the arm, it should end around the mech’s thigh region. You don’t want it to go as far as the knee, unless you are building a gorilla-mech. 🙄

The open setting is definitely a LEGO technique for those looking for a front-facing display or something cool to play with. By utilizing a more dynamic variation of this system, you not only give yourself more play-options but a greater versatility in how it can be presented.

Mechs, on the other hand, will be extremely specialized and not every LEGO fan will want to build them. However, you can take the rules for making  humanoid proportions and apply them to less robotic designs. For example, the statue of a human. You may need to make the feet smaller, but the general guidelines for making a human figure still apply. There are some shapes that remain universal; in fact, you can use your own body as an example. This article was just to point those features out and make you aware of what to look for when making a human-like LEGO model.

So what do you think? How do you like the LEGO building techniques discussed here? Do you prefer open LEGO designs or are you more into realistic creations with an inside and an outside? Have you tried building a LEGO mech before? Feel free to share your own experiences, tips or ask questions in the comment section below! 😉