You have probably heard by now that this past week (May 23rd, 2013) the LEGO Group unveiled the World’s largest LEGO model with much fun-fare, and to delight LEGO Star Wars fans across the galaxy. The model, shrouded in mystery, turned out to be the 1:1 replica of the LEGO Star Wars X-Wing starfighter, and first displayed in New York’s Times Square. I was waiting for some good video-footage of the event before posting about it here, as pictures alone didn’t give justice to the massiveness of the LEGO X-wing. So let’s check it out! 🙂 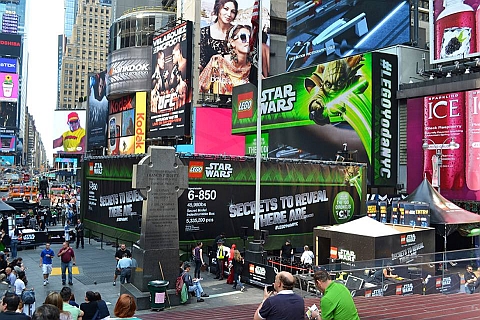 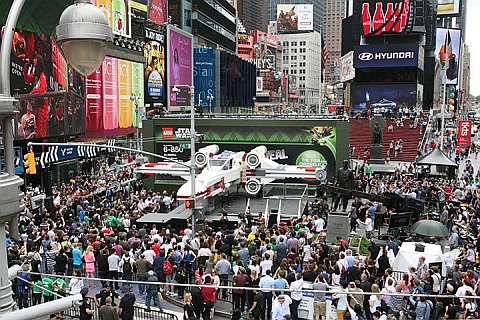 Here are some details on the LEGO Star Wars life-size X-wing and also video-footage from our friends over at the BrickShow: To celebrate the upcoming premiere of The Yoda Chronicles on Cartoon Network on Wednesday, May 29 at 8:00 p.m. (ET, PT), the massive replica took 32 master builders, five million LEGO bricks and over 17,000 hours to complete. The model weighs nearly 46,000 pounds, stands 11 feet tall and 43 feet long, with a wingspan of 44 feet. After three days in New York City’s Times Square, the Model “takes off” for a summer landing at LEGOLAND California Resort where it will be installed through the remainder of the year.

An international team of designers, builders, engineers, mechanics and logistics experts spent over a year bringing this model from brainstorm to reality using the same LEGO bricks and elements featured in the general LEGO retail collection. “Just as kids love to test and hone their LEGO building skills and imaginative storytelling, our LEGO Master Builders are always testing their creative skills to top their last larger-than-life sized creations”, said Michael McNally, Brand Relations Director for LEGO Systems. “The size and structural complexity of a freestanding model 42 times the size of one our retail sets was a challenge they could not resist.” 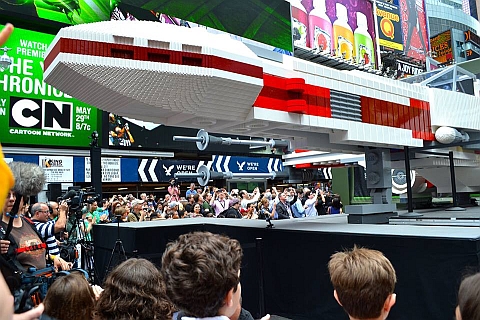 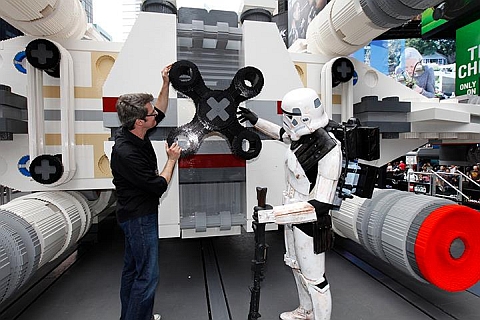 Below are some fun facts about the life-size LEGO Star Wars X-Wing Starfighter model. It would be awesome if the building-instructions would be available so we can make our own! 🙄

LEGO Star Wars is the original and most successful licensed product collection in the LEGO Group’s history and remains among the best-selling global toy-lines. The theme’s evergreen strength comes from its appeal across generations to fans of all ages and a steady introduction of digital content such as The Yoda Chronicles to compliment the building experience. To check out the currently available LEGO Star Wars sets, including the most detailed and realistic Ultimate Collector Series #10240 LEGO Star Wars Red Five X-Wing Starfighter, visit the Online LEGO Shop: LEGO Star Wars Sets at the Online LEGO Shop 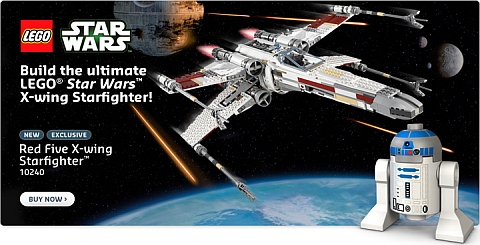 As far as Cartoon Network special, the Jedi Master will return in LEGO Star Wars: The Yoda Chronicles in a 30-minute special premiere on Wednesday, May 29 at 8:00 PM (ET, PT). Yes, that’s tomorrow! Two additional specials will air later in 2013. Here are some details: 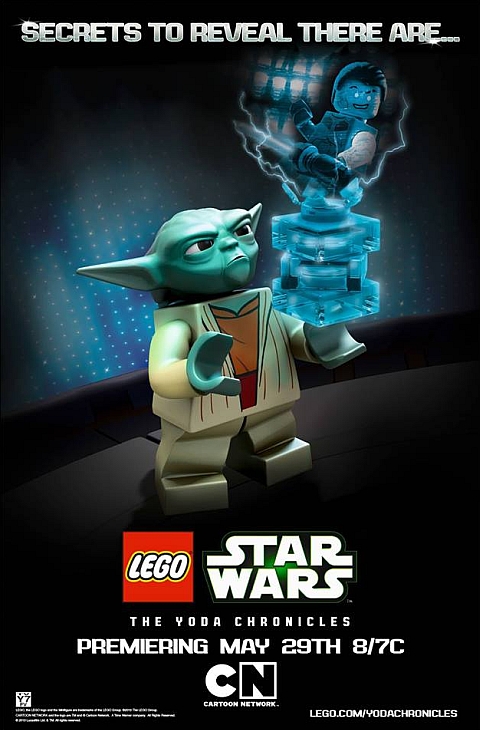 LEGO Star Wars returns in epic style with The Yoda Chronicles, an exciting, funny and action-packed new LEGO Star Wars story told in three animated TV specials. “The Phantom Clone” will premiere on Wednesday, May 29 at 8:00 p.m. (ET, PT) on Cartoon Network with specials two and three airing later this year. In the first of three specials, a brand new character, Jek 14 will enter the Star Wars universe. Created by the LEGO Group, Jek 14 is a clone who has been ‘enhanced’ by the Force. Set in the prequel Star Wars era, The Yoda Chronicles features the one and only Yoda — the Jedi Master who has seen it all, done it all and taught generations of Jedi Knights. With help from a fresh class of Padawans, Yoda leads the Jedi in a desperate fight to stop Darth Sidious and his minions from creating a new super-weapon that could crush the Republic and win the war for the forces of evil. In “The Phantom Clone” under the orders of Darth Sidious, Count Dooku sets out to create the new ultimate weapon for the Sith. It is now up to Yoda and the Padawans to prevent Dooku from carrying out his plan but will they be too late? 😕

The LEGO Star Wars specials have quickly become fan favorites on Cartoon Network. Last year’s The Empire Strikes Out premiered as the #1 telecast of the week among boys 9-14, and the #1 telecast of the day among kids 6-11 and key boy demos, according to Nielsen Media Research. LEGO Star Wars: The Yoda Chronicles is written by Michael Price (The Simpsons) and produced by Threshold Animation. This special marks the first time entirely new Star Wars characters and vehicles have been created specifically for LEGO Star Wars. Building sets related to The Yoda Chronicles and featuring Jek 14 will be available in August. 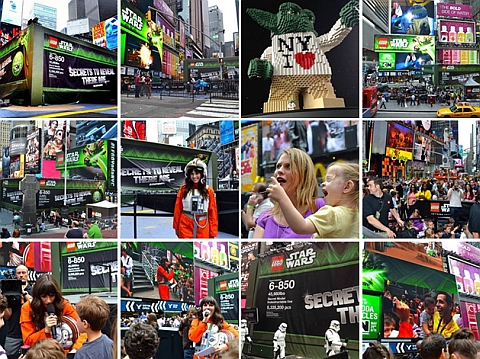 You can see more pictures of the unveiling of the life-size LEGO Star Wars X-wing at LEGO’s Facebook Page. So what do you think of the life-size X-wing? Were you there? Or wish you were there? And how about The Yoda Chronicles? Are you excited yet? Feel free to share your thoughts and discuss in the comment section below! 😉