Recently I found a LEGO reviews YouTube Channel I really liked and thought to share with you. The channel’s name is LEGOJANG and is run by a San Francisco based Internet User Interface Designer and LEGO hobbyist. Most of Jang’s reviews are of LEGO Hero Factory and LEGO Bionicle sets, and he also shares his own improved versions of the characters, which are particularly interesting. Jang has been also branching out to reviewing other LEGO sets (recently from the new LEGO Castle, LEGO Legends of Chima and LEGO Galaxy Squad lines).

What I really like about Jang’s LEGO reviews is the tasteful presentation, clean and distraction-free background, gentle voice, and solid filming and video-editing. I also appreciate his detailed analysis of each set from the design and building perspective through the eyes of an adult LEGO fan. Below I will show you some of Jang’s reviews, and will also give you links to where you can find the rest. 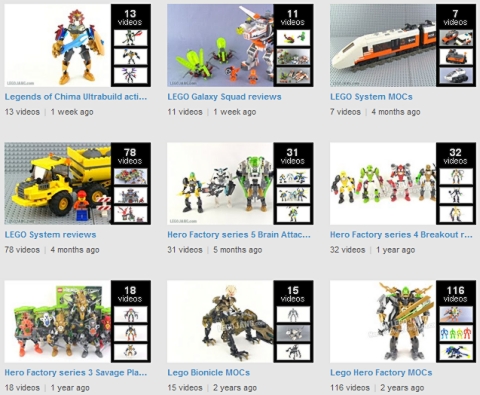 ➡ LEGO LEGENDS OF CHIMA ULTRABUILDS REVIEWS: these include reviews of all the recently released LEGO Legends of Chima large action figures and combination models.

➡ LEGO HERO FACTORY REVIEWS: these include reviews of all the LEGO Hero Factory Brain Attack sets and combination models.

➡ LEGO GALAXY SQUAD REVIEWS: these include reviews of all the LEGO Galaxy Squad sets from wave one, and some from wave two.

These are just some samples of Jang’s LEGO reviews. There are a lot more. I won’t upload any more video-reviews here as it would make the page difficult to load, but you can check out all of Jang’s reviews and LEGO creations at LEGOJANG’s YouTube Channel. You can also visit his LEGO blog here, and his LEGO Facebook Page here.

So what do you think? How did you like Jang’s LEGO reviews? Also, any other LEGO reviewers that you really like? At some point I’m planning to put together a best LEGO YouTube reviewers page, so if you have a favorite channel feel free to share it in the comment section below! 😉

Next post: LEGO Legends of Chima new episodes in July!