Today I would like to introduce you to a great (although retired) role-playing LEGO webcomic called Irregular Webcomic!

Irregular Webcomic! is a webcomic written by David Morgan-Mar, an Australian Physicist, started in the year 2002 and ended in 2011, at which point it became a blog. I know there are a lot of LEGO webcomics, such as Legostar Galactica, but this is my favorite. Well, it’s not technically a LEGO webcomic, more like a role-playing webcomic. But in a LEGO aspect, it should be noted that only about 3 out of around 18 webcomics don’t use LEGO minifigures as the main characters, and 2 of the 3 still uses LEGO to create the scenery.

This LEGO webcomic is called “Irregular” because unlike other webcomics, which post a new chapter every week and follows the same storyline, Irregular Webcomic! is divided into themes, and they are published randomly; one week may be Fantasy, the next may be Space. But it’s quite ironic that it is one of the few webcomics that, while it lasted, was released “regularly”.

Now, let’s talk about the LEGO comics themselves. The charm – at least to me – is the funny strips, but there is more to it than that. David often gives hilarious annotations, which are also thought-provoking and educational, so it’s a win-win for you, the reader.

Another nice feature is the themes themselves; one may expect cliché themes such as Adventure, Fantasy, Space, Pirates, etc. But while Irregular Webcomic! has all of the above included, there is more. Themes such as Espionage (inspired by James Bond), and Cliffhangers (inspired by Indiana Jones) are fun, interesting, and often surprising.

And then there are the downright unique but still awesome themes like Nigerian Finance Minister, MythBusters (yes, that MythBusters) and Steve & Terry (by Steve meaning Steve Irwin). But just when you think you can’t top Steve wrestling Cthulhu…

David Morgan-Mar did. He made crossovers. Imagine what would happen if Adam challenged Death in a MythBusting contest? Yep, it happened! 😈

Now do you see why I like this webcomic so much? If you still don’t, let’s see it in a more LEGO aspect. Observe the Cthulhu model below. In case you haven’t noticed, that Cthulhu was made by plucking an octopus from a LEGO Classic Pirates set and added to a dinosaur body from the long retired LEGO Dinosaurs theme, and then putting on wings. Personally, I think it looks rather creative. This kind of strange combination is one of the things that remind us how wonderful LEGO is as a creative medium; it can be used to create just about anything!

Being a webcomic, Irregular Webcomic! focuses more on the characters -which means the minifigures. In fact, David Morgan-Mar has admitted that one of most used background is the baseplate from the #6278 LEGO Enchanted Island set, using both sides, and with the minifigures… I can’t say that’s overly creative, but it serves its purpose well. Below is a shot of some of the characters from the earlier themes. Notice that not all are made by LEGO, but they still fit in perfectly. 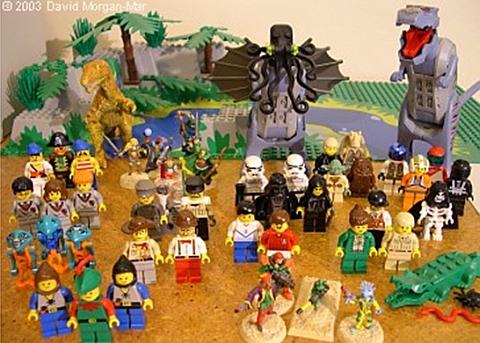 Now, I’ll talk a bit about my top 3 favorite themes…

➡ DEATH LEGO WEBCOMIC: Death is a very unique theme. It introduces the concept that there is one Death for every death, (Death of Drowning, Death of Falling Off a Building, etc.) This leads to some incredibly specific deaths, like, Death of Insanely Overpowered Fireballs – who happens to be the main character of this theme, as he is constantly promoted and demoted. Link to Death LEGO Webcomics

➡ FANTASY LEGO WEBCOMIC: The fantasy theme chronicles the adventures of a group of adventurers: Lambert (a Hobbit merchant) Alvissa (an Elven bard), Mordekai (a *lovable* rogue), Kyros (a pyromaniac wizard), Draak (a lizard-man who talks in mono-syllables) and Dwalin (the dwarf). This series is very amusing, especially thanks to Kyros’ antics, and the overall irresponsibility of the group. Also, the theme pokes fun at The Lord of the Rings, as shown below. Link to LEGO Fantasy Webcomics

➡ STEVE & TERRY LEGO WEBCOMIC: Last but not least, we have Steve & Terry, a theme telling the whimsical misadventures of Steve, a fearless crocodile-wrestler, and his long-suffering wife, Terry. It’s interesting to note that the character that antagonizes this theme is none other than Cthulhu. Also, Steve & Terry has one of my most favorite memorably funny strips, which is a crossover with Death. Link to Steve & Terry Webcomics

So that’s just a little intro to the Irregular Webcomic! series. If you are interested go ahead and check them out following the links above. Want more of David Morgan-Mar? Like Star Wars? Try the ongoing webcomic, (which is not related to LEGO at all) called Darths & Droids. What do you think? How did you like these LEGO webcomics? Any other ones that you really like? Feel free to share in the comment section below! 😉