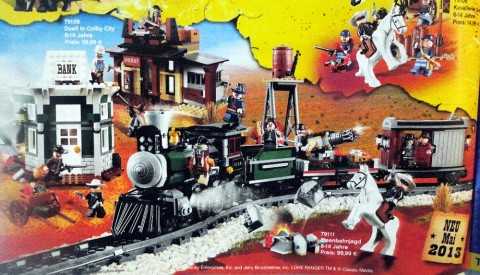 So it’s time for the largest LEGO Lone Ranger set to be broken down and examined. And as nice as the small exploding rock-pile is, and as fancy as the collapsing water tower can be, the real interest in this set is of course the train. I will admit that the #79110 LEGO Lone Ranger Silver Mine Shootout feels like a larger set due to its size, but the difference in the price comes from the fact that you get a whole circuit of train-tracks, as well as three cars attached to the train-engine. Most LEGO train sets will only have two cars attached, so this is a nice bonus. Thanks to these factors we can have a clear example of the LEGO technique called “front-loading”, and we also get to talk about a technique that is train specific. So let’s get into the details!

Put together any set by LEGO and you’ll notice that certain areas of a model look better than others. These areas usually are those sections that are in the front, or the ones that get looked at the most. This is what’s called “front-loading”. This technique is not often employed by LEGO fans. After all, if you go through the trouble of building a LEGO model, why wouldn’t it look good from every possible way? Well, LEGO does not have that luxury. LEGO designers have a price-range to stay in, which means they’re limited by the number of parts they can use.

The LEGO Lone Ranger Constitution Train Chase is a perfect example of front-loading. Simply look at the engine and then the rest of the set. Just by examining the set you can see where all the detail and attention went. And it makes sense; we are naturally inclined to admire the train-engine first and the longest. What this ultimately teaches us as LEGO builders is to pick the aspects of our creations that we think are most important. This is where we need to spend the majority of our designing and building time. Sure, you can spend hours on recreating a small interior that only you will enjoy, but if you are displaying your LEGO creation for the pleasure of others, or if you are limited by the number of LEGO elements you have, you may want to use front-loading as a way to structure your priorities.

When you examine the LEGO Lone Ranger Constitution Train Chase, you may notice the wheels for the train-engine are divided into two parts. This is partly due to having an engine that can hug the track well, but there is a more subtle stability concern demonstrated. The back three large drive-wheels only have two grooved wheels on each side. The middle wheel is different than the outer wheels. Plus the outer wheels are roughly 10 studs apart. 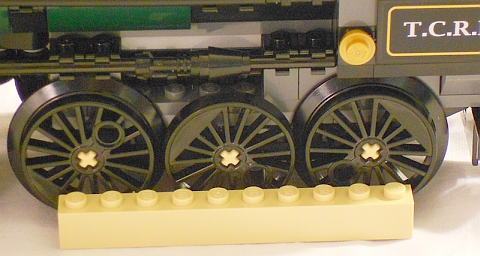 So let’s start by talking about that missing groove. Notice that these wheels are created to be fairly rigid. There is no bend left or right to their possible movement. This rigidity transfers to the track directly in how the wheels hold on. In this case, you would have a strong firm connection which is great on a straight track, but would be a disaster when the train comes to a curved track. The wheels are fixed and will remain fixed. The curved track is the same way. Therefore, when the two meet something has to give and it will most likely cause the train to derail. The missing groove however allows some play when the engine is going over a curved track. 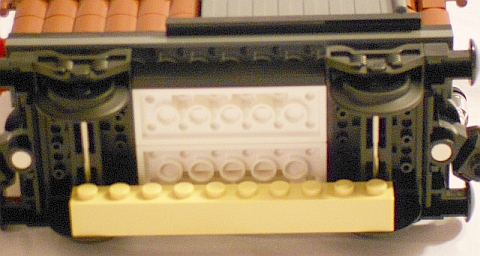 Now let’s look at that 10-stud space. Here, we are talking about 10 studs in between the center of the wheels. In fact, both the train-engine and two of the train-cars have this same spacing. The thing to note is that all the wheels are rigidly fixed. This doesn’t mean that they can’t handle curves, but they can be prone to be unstable.

LEGO has worked out that a 10-stud separation for fixed wheel-bases is about how much a train car can handle safely. Spreading the wheels beyond this limit runs into the same problem as having too many grooved wheels. If you do need to go beyond 10 studs, you’ll need to build your train-wheels with the ability to turn – kind of like the front of this train. Real-world trains face this same limitation. Think of when you hear a train turning on a curved section of track. There is typically a lot of squealing. That is the sound of wheels and rails fighting one another for space.

Front-loading is not a technique you’ll employ in a fan made LEGO creation too often. LEGO fans typically like to make their LEGO models perfect from every side. However, this technique makes an excellent tool to focus your efforts and priorities in the right area at the right time. To use this technique in the right way ask yourself, “Will this section of my LEGO model be seen the most?” If the answer is “no” you might not be using your LEGO elements in the most efficient way. You’ll want to start with the most seen areas and then you can examine which area is the next most seen and so on.

As for LEGO train wheel-spacing, this is a technique we as LEGO builders don’t get a lot of practice in. Let’s face it; LEGO trains can get pretty expensive. Gaining the knowledge ahead of time on how wheels can be used most efficiently can save you from ending up with a train that looks great but would get stuck on the tracks.

So what do you think? How do you like the LEGO building techniques discussed here? Do you focus on all sides of your LEGO models or only the sections that are most visible? And how about building your own trains? Have you run into any trouble with figuring out how to space the wheels to handle curves? Feel free to share your own experiences, tips or ask questions in the comment section below! 😉