I suppose I should start out by saying how I got into this. Well, it all started one day (June 21st to be exact) when I got an e-mail from Bricks Indonesia, the largest (and more-or-less the only that I know of) LEGO fan community in Indonesia. I’m subscribed to their email updates to receive notifications on LEGO fan events. As every other e-mail sent by Bricks Indonesia, it simply consisted a picture. See below: 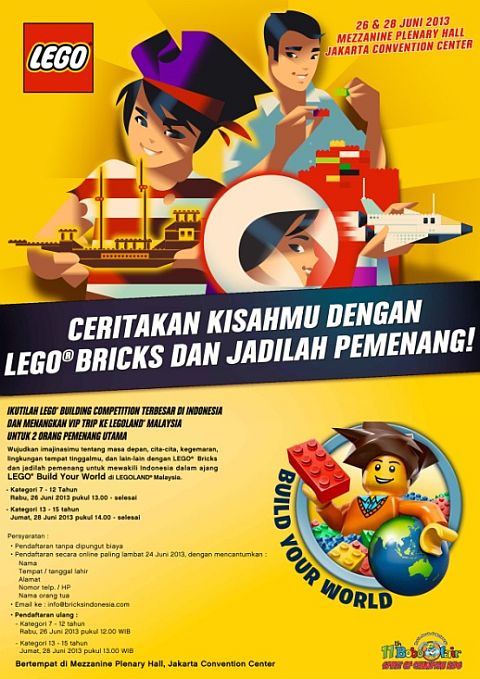 I doubt you understand any of that unless you’re Indonesian or perhaps Dutch. Basically it says that there is a competition where you “build your story” and stand a chance to win 2 VIP tickets to LEGOLAND Malaysia. You can actually find an English version of the LEGO contest details on the Singapore LEGO site, although there were some differences. In my country the contest was divided to two categories: 7-12 year-olds and 13-15 year-olds, and we got 2 hours to build instead of only 45 minutes. I instantly got my parents’ consent, sent in my application via e- mail from an airport lounge (don’t ask), and got confirmation of my contest entry shortly after. Then I went on vacation and only returned on the 26th. The LEGO contest was set to happen on the 29th, so I made it just in time. 🙄 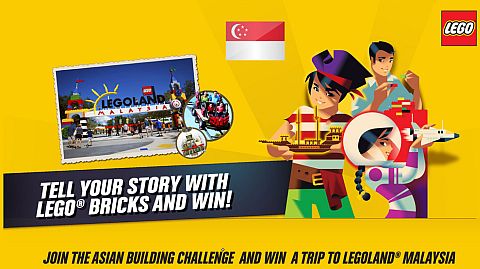 So I guess now I better start from the morning of the 29th. I woke up earlier than usual, feeling slightly groggy, and I quickly took a shower and opened my laptop to brush-up on some unconventional building techniques from this builder’s guide (which proved to be very useful later). Then I chugged down a man-mug of milk and wolfed down a plate of eggs. Then I went with my mom to work. Her office just happened to be across the LEGO contest location. I arrived there at about 9 AM. The LEGO contest was held within the Bobo Fair, which is based on a popular Indonesian children’s magazine called Bobo. Arriving so early wasn’t too smart as the fair didn’t open until 10 AM and the contest wouldn’t start until noon (and didn’t actually start until 2 PM) . Nevertheless, I got in as soon as I could. I thought it would be tough to find the LEGO section and the LEGO contest registry-booth, but not at all. You couldn’t miss it: 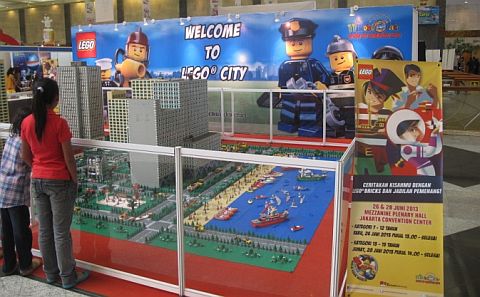 After registering for the contest, I walked around the LEGO section only to be horrified by the prices (the #21007 LEGO Architecture Rockefeller Center set was $62!). They were also displaying some of the LEGO contest entries from the 7-12 year-old category. 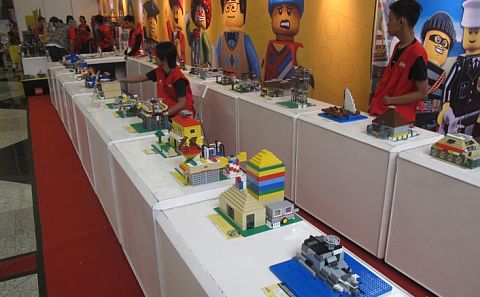 There was also a LEGO Legends of Chima Speedorz display, and this was the very first time I tried to play with Speedorz. I hated it. It’s even tougher to use than Ninjago Spinners. Then after some aimless strolling around the fair, I decided to go to Pacific Place, a mall which doubles as a Ritz-Carlton Hotel and my mom’s office. So I went there, but not before catching a glimpse of a box full of LEGO Legends of Chima stickers and LEGO Hero Factory polybags being carried by the LEGO contest committee. I wondered what they’re for. Participation-prize maybe? Anyways, I met up with my mom on her lunch-break, and she showed me some bookstores where I could hang out. On my way back I got lost by making a wrong turn, so the contest had more-or-less started already by the time I got there. I darted to the competition area, got my name-tag, and also to my surprise ran into an acquaintance who was also participating.

So the LEGO contest begins! First I started making a thing that vaguely resembled a car. But I’m kind of lame at making automobiles, so I scrapped it. Then I tried making some floating-garage-thingie. But I’m pretty lame at making structures too, so I scrapped that too. By then I had begun eyeing my competitors’ models. They were all generally building blocky houses. I saw one which employs an opening back like the LEGO Creator Log Cabin set. Smart. (Later I found out he won 2nd place in my category. I have good taste after all!) So I thought to myself, “I should do what I do best, and start thinking about using unconventional and illegal LEGO techniques.” So I decide to make robots, my style! 😎

The first LEGO robot was more of a warm-up. Therefore, the legs ended up kind of droopy. I couldn’t think of any ways to fix them with the available LEGO bricks and without ruining the aesthetics. So I just propped my first robot against a fence and started on the second one. 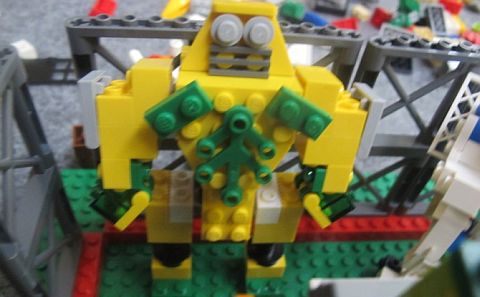 Now I was feeling more serious. For the second robot I was only sure of two things while building: It’s got to be more slender than the first, and wanted to incorporate those wheel-arches on the shoulders. However in the end it was the feet I was most proud of; I used a car door. Sadly, I was in a hurry taking pictures so I didn’t quite get the legs. 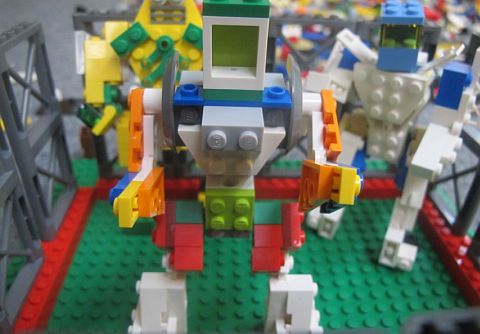 By the time I made the third robot, I was on fire. It had been more then an hour and a half of backbreaking building. I love the torso of this robot, and the shoulder-pads made of car doors – at least to me – resemble the shoulder-pads of the body-armor of Saiyans from Dragon Ball. 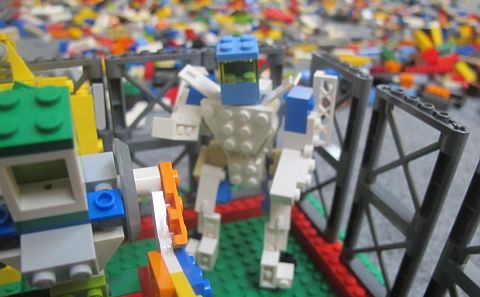 Below is an overall picture of my submission to the LEGO contest. All creations had to be on a 32×32 stud baseplate, so I decided to build a fence around the robots. Also, remember earlier when I said reading the LEGO builder guide would come in useful? It did. If it wasn’t for that, I doubt I would have used a fence in a SNOT technique. And after this whole contest, I now have a new favorite LEGO element; the car door. It’s just so useful for so many things! Basically, all the robots have aspects that fulfill the four criteria of Fikko-Style Robots: weird angles, weirder LEGO building-techniques, tons of pose-ability, and alarming fragility. 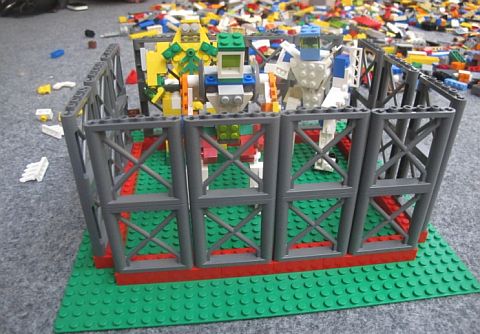 I was one of the last to finish my creations for the LEGO contest. After that the organizers took pictures of me with my model – which proved to be a grueling task, for simply lifting up the robots made their limbs fall. We did it at the end though. On the way out, the lead committee handed me a LEGO Legends of Chima sticker-sheet and the LEGO Hero Factory polybag set, so I was right about those! She also asked me to accompany one of the committee and bring my model, for it was too fragile to be carried. This was true, as mine was a delicate trio of bots while other entries were mostly sturdy houses. So I placed the model where it supposed to go and fixed any damage.

Well, that’s the end of Part 1 of my adventures at this LEGO contest. Stay tuned for Part 2, where I will finish my tale and tell you how I did at the contest! So what do you think? Have you ever participated in a LEGO contest? Or would you like to? Feel free to share your thoughts, and if you have any questions, in the comment section below! 😉

And you might also like to check out some of my other articles or visit my Contributors Page for more. Thanks for reading and commenting!