Continuing news from Comic-Con in San Diego, one of today’s big announcements is for LEGO Ninjago fans! Papercutz – publisher of the very popular Ninjago novels – announced at their booth that they will continue the Ninjago novel series through 2014. They will be the only new Ninjago stories between now and when the Ninjago feature-film comes out. 🙂 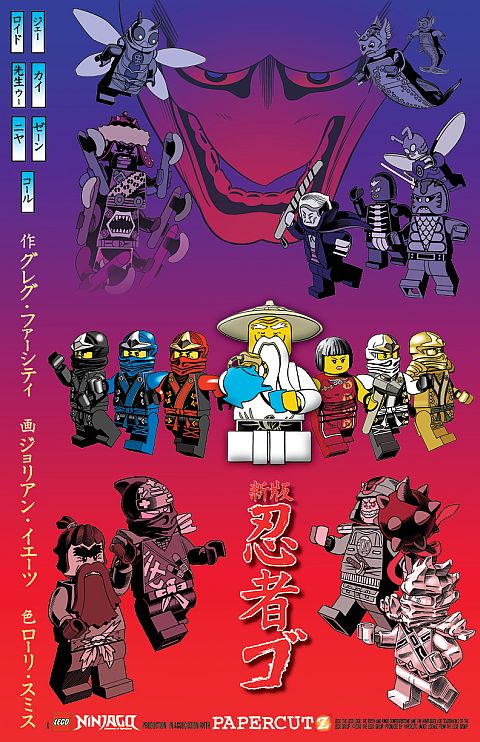 Papercutz also revealed a Comic-Con exclusive Ninjago poster, only available as a gift-with-purchase at the their booth at Comic-Con. The image shows a small sampling of the villains Sensei Wu and the ninja have faced over the years, which is especially relevant now that they have their biggest challenge ever coming up next year. The Papercutz team believes that the Masters of Spinjitzu are real heroes, and they wanted to celebrate another year of new adventures with an image that shows how far they’ve come! And the classic Japanese movie-poster style gives a nod to Ninjago’s inspirational roots.

Jesse Post, Marketing Director of Papercutz says: “We’re really excited to continue the story! I know fans have been clamoring for new Ninjago anything since the TV show finished, and our books will now continue through this year and into next. Unless the show is renewed, this will be it until the movie comes out. Our plan is to publish a new book every season (every four months), as we have been. The creative team (Greg Farshtey and Jolyon Yates) will be the same as well.” 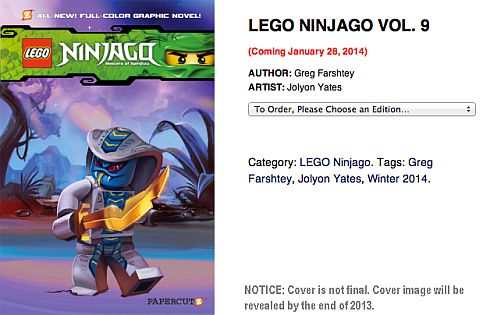 Here are some details on the first Ninjago book that will be published in 2014: The Masters of Spinjitzu return! The saga continues here, and only here! After the defeat of the Stone Warriors, Jay, Cole, Zane, and Kai have to regroup fast when an even greater challenge rises from the shadows. With their ranks divided against the most sinister, most unstoppable foe they have ever faced, the ninja must call upon everything they’ve learned from Sensei Wu… and more. This is the one you’ve been waiting for! All-new high-kicking action from the world of Ninjago! The book will be 64 pages. Price: $6.99 (paperback), $10.99 (hardcover). Release date: January 28, 2014. You can read more about the book on Papercutz website.

. They are excellent books for Ninjago fans of all ages! I read them all myself. 😉

So what do you think? How do you like the news that more Ninjago stories are coming? Have you read the previous books? Feel free to share your thoughts in the comment section below! Also, the creative team behind the Ninjago stories is happy to answer questions from Ninjago fans. If you do have any questions, ask them in the comment section and I will forward them to Greg and Jolyon. 🙂

You might also like to check out the LEGO Ninjago section for more news, reviews, videos and discussions. Or select from the posts below: