There is a very interesting new LEGO book that just got released recently, titled Brick by Brick, written by David Robertson. This is not a LEGO book with inspiring LEGO models, but a book on LEGO’s history. And don’t think history means boring; LEGO has a very rich background full of twists and turns that Robertson captures incredibly well. 🙂 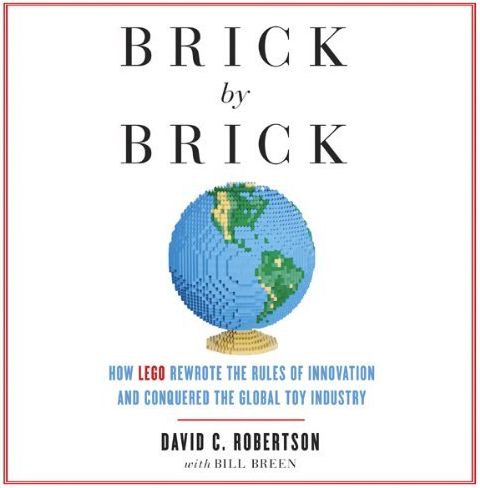 Here is a quote from Robertson in the preface of the book to give you an idea how it all began: “I first approached the LEGO Group in 2007 while studying innovation efforts at companies in the United States and Europe. I’d surveyed fifty-six companies to understand their innovation management practices and planned to write a book about innovation and leadership, where I’d draw lessons and stories from many organizations and use those cases to illustrate how companies should manage innovation. After visiting LEGO, I wrote a case-study that I hoped to use both in the classroom at the Swiss business school IMD and, later, in my book. When I first thought my case-study of LEGO at IMD in 2008 and 2009, I was taken aback by the outpouring of enthusiasm for the brand and its capacity to reawaken the sense of experimentation and play that resides within everyone. Subsequent interviews uncovered one fascinating aspect of the LEGO story after another. I realized that the LEGO management team had done more than just turn around the company; they had fundamentally rethought what ‘innovation’ meant and how it should be managed and, by doing so, had rescued the company and boosted its performance to new heights. I saw that this case-study was much more than a chapter in a book about innovation management – it was a full book’s worth of stories and lessons: about a toy that touched the lives of millions around the globe for close to a century; about a much-beloved company that lost touch with its customers and its history and almost went out of business as a result; and about managers whose love to the company and perseverance saved it from ruin. What started as an academic book about innovation management became a much richer narrative of failure and recovery.” 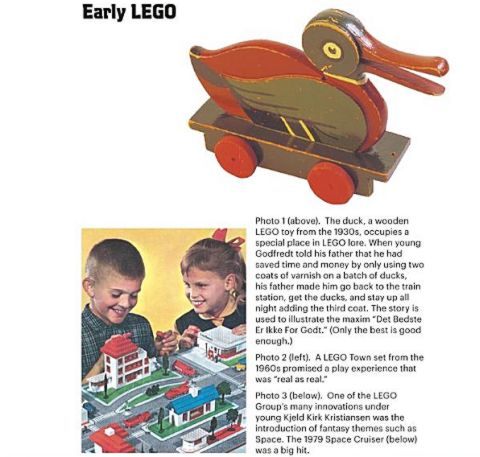 And here is the review of this LEGO book by Amazon: Brick by Brick takes you inside the LEGO you’ve never seen. By following the teams that are inventing some of the world’s best-loved toys, it spotlights the company’s disciplined approach to harnessing creativity and recounts one of the most remarkable business transformations in recent memory. Brick by Brick reveals how LEGO failed to keep pace with the revolutionary changes in kids’ lives and began sliding into irrelevance. When the company’s leaders implemented some of the business world’s most widely espoused prescriptions for boosting innovation, they ironically pushed the iconic toymaker to the brink of bankruptcy. The company’s near-collapse shows that what works in theory can fail spectacularly in the brutally competitive global economy. It took a new LEGO management team – faced with the growing rage for electronic toys, few barriers to entry, and ultra-demanding consumers (ten-year old boys) – to reinvent the innovation rule book and transform LEGO into one of the world’s most profitable, fastest-growing companies. Along the way, Brick by Brick reveals how LEGO:

Sometimes radical yet always applicable, Brick by Brick abounds with real-world lessons for unleashing breakthrough innovation in your organization, just like LEGO. Whether you’re a senior executive looking to make your company grow, an entrepreneur building a startup from scratch, or a fan who wants to instill some of that LEGO magic in your career, you’ll learn how to build your own innovation advantage, brick by brick. 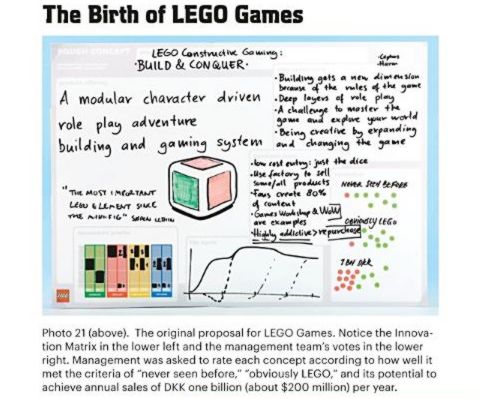 Below is a very interesting question and answer session with the author of the Brick by Brick LEGO book:

❓ How did you come to be involved with LEGO? – I study the management of innovation and was writing a book on my framework for innovation governance. It was going to be a typical business book, where each chapter was a piece of the framework illustrated with a case study or two from a different company. I had done cases on CarMax, McDonald’s, Best Buy, Mattson, ING DIRECT, and a few other very good companies. But then I visited LEGO and saw not only a company with the most sophisticated innovation management system I’d ever seen, but also a company that had been through an amazing roller coaster ride over the past decade, from near ruin to tremendous success, all because of the way they managed innovation.

❓ At what point did you realize you had uncovered a big story? – It was 2008 when I realized that I was onto something. Two things happened at the same time. First, when I taught the case study about the LEGO turnaround in IMD in 2008, I was surprised by the enthusiasm for the brand and the simple joy that the memories evoked. Talking about LEGO for a few hours put the executives I taught into a wonderful mood and at the same time taught them some valuable lessons about innovation management. It was also 2008 when the effects of the company’s changes started to show up in their financial returns. From 2004 to 2007, their financial performance was good, but they were still working out problems in the supply chain and production system. After 2007, their performance began to skyrocket, as they introduced hit toy after hit toy. Those two things together convinced me there was a book to be written about what I was seeing.

❓ What does LEGO’s journey teach business leaders about innovation – perhaps even better than other company examples like Apple and Google? – What I like about LEGO is how “inside the box” they are. Too much of the literature on innovation is about the big, industry-changing innovations or about charismatic leaders who drive their companies to new heights. One of LEGO’s managers, Per Hjuler, said to me: “I’m continually humbled by the power of the little idea.” LEGO is successful because they are continually innovating on many different dimensions, but they’re doing it within a fairly traditional business system.

❓ You call BIONICLE the toy that saved LEGO, both in terms of financial impact and the lessons the company learned from it about innovation. Can you explain? – BIONICLE was the toy that saved LEGO, even though it’s always been a controversial toy within the company. There are those in LEGO who still believe it’s not an appropriate toy to carry the LEGO brand. But without the revenues from BIONICLE to carry them through the crisis years of 2003 and 2004, the company would not have survived. But BIONICLE also taught LEGO some lessons about how to work with external partners, how to interact with passionate customers, and how to manage an intellectual property. LEGO had seen from its partnership with Star Wars how a rich story can captivate kids and drive sales of toys. But making toys around someone else’s story is a different challenge than creating your own story and characters, and building toys around it. BIONICLE boys loved the toy, and loved the T-shirts, books, comics, backpacks, sneakers, and everything else that had a BIONICLE image on it. LEGO had to learn how to not only develop a toy with a rich story, but also work with a group of outside partners and bring them along as the story progressed. And by interacting with the fans online, Greg Farshtey, the guy in LEGO responsible for story and character development, could understand where the story was confusing or unclear and fix the issue in the next release.

❓ Another toy that taught LEGO a major lesson was MINDSTORMS, the programmable robots. What did LEGO learn from this? – LEGO took a unique approach when they developed the next generation of MINDSTORMS NXT – the robotics kit they released in 2006. They opened up their innovation process, but they used the “wisdom of the clique” not the “wisdom of the crowd”. They started with a small group of sophisticated fans and brought them into the development process. As development progressed, they expanded the group steadily. When they had most of the major development decisions completed they opened up the process more, and used a crowd of one hundred fans to help them do the final development and testing. There’s a lot written about the wisdom of the crowd and how powerful it can be, and I completely agree that if used well it can be a very powerful source of ideas. But early in the development process, when there are lots of constraints and tradeoffs, it helps to keep the team small and decision-making structures clear. LEGO learned some valuable lessons from MINDSTORMS about how to do that well.

❓ In just ten years, LEGO has gone from the brink of bankruptcy to the most valuable toy company in the world. What, in your opinion, was the most dramatic shift from the old LEGO to new? – The Company’s brush with bankruptcy gave it a dose of humility that it sorely needed. In the years between 1999 and 2002, the company’s manager made decisions about which toys to launch and which to kill. They proved remarkably bad at that. Mads Nipper, who runs all of product development and marketing, says “there are only two totally honest groups of people in the world: kids and drunks.” Now, when LEGO is looking to develop a toy, they show different concepts to groups of kids, then they do rough mockups of the toys, then more finished versions, and so on until they’re sure they’ve got the toy right. Management’s role has changed from making decisions about which toys to bring to market, to making sure their teams have tested the toys thoroughly. 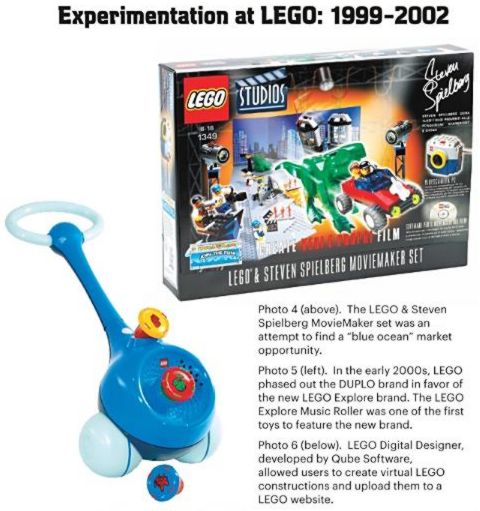 Below are some quotes from reviews of the Brick by Brick book:

If you are interested in LEGO’s history, or like to study or teach management concepts and how they can be executed in real-world situations, this is an excellent book to dive into. The book is available on Amazon in hardcover, paperback and Kindle edition. It is also available as an audio-book. You can listen to a sample on Amazon’s page that I highly recommend. It is very interesting! 😀

If you have read the book already let me know what you think in the comment section below! I would love to hear your feedback, especially from those of you who are well-versed in LEGO’s history. 😉