One of the most interesting recent LEGO themes has been LEGO Galaxy Squad. It is LEGO’s own in-house space-theme – instead of another licensed product line – which allows LEGO designers to work freely and give us the best of their designs. The LEGO Galaxy Squad sets are based on the conflict between alien space-bugs who threaten human existence, and the good-guys who try to terminate them. We have reviewed many of the first and second wave of LEGO Galaxy Squad sets before, and today I would like to show you one of the recently released #70707 LEGO Galaxy Squad CLS-89 Eradicator Mech set in more detail. 🙂 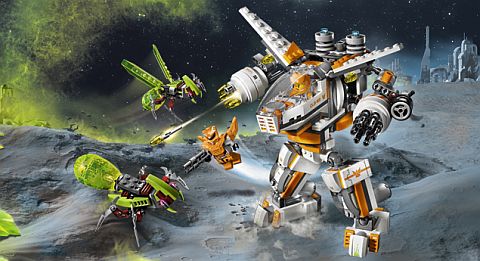 Here is the official description of this LEGO Galaxy Squad set: Get back into battle with the bugs with the split-function CLS-89 Eradicator Mech with rapid-fire missiles! Help orange team leader Jack Fireblade and his robot sidekick raise the mech’s powerful arms, load the rapid-fire flick missiles and aim the laser cannon to stop the alien abductoids! When the battle heats up, activate the Eradicator Mech’s split function, lower the wings and take flight in the super-agile galaxy jet with hidden bay door and deployable bomb. Stop the bugs from trapping the Galaxy Squad in cocoon prisons! Includes 2 minifigures with weapons: orange team leader Jack Fireblade and his robot sidekick. 440 pieces. Price: $39.99 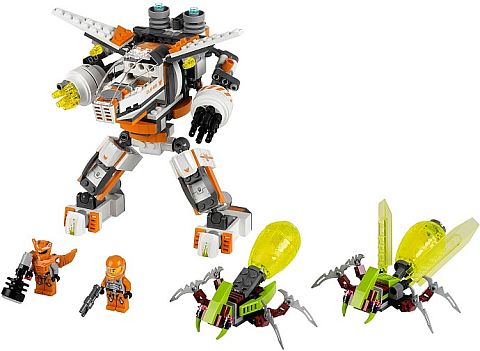 Now let’s look at the LEGO Galaxy Squad minifigures in this set. The Eradicator Mech belongs to the Orange Team of bug-terminators, so they all wear orange uniforms. The team-leader is Jack Fireblade with his torso printed both front and back, printed legs, and a dual-sided head. He has two of the new guns with a binocular piece attached at the end to make them longer. The orange robot-sidekick also has dual printed torso, printed legs, and an orange armor with attached wings. The wings kind of look like the ones on the Orange Team’s logo. The robot comes with a giant sonic-cannon, that has a sight like most robot guns do, and it’s pretty fun to build. Please note that both Jack Fireblade and his robot-sidekick are the same as in the other Orange Team set, the #70705 LEGO Galaxy Squad Bug Obliterator. 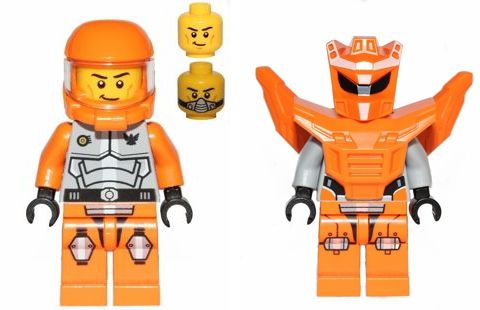 Now let’s check out the bugs in the LEGO Galaxy Squad Eradicator Mech set. The two bugs are quite similar; both have a cocoon on their back that you can open up and fit a captured minifigure inside. One of the bugs comes with wings, while the other is a creepy-crawly type with no wings. Their heads and legs are similar and designed with very interesting building techniques. They were quite fun to build. 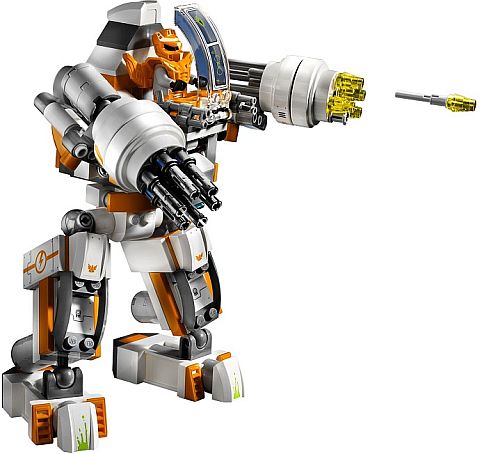 Now the part we have all been waiting for; the LEGO Galaxy Squad Eradicator Mech itself! The mech has two different weapon-functions; a missile-launcher and a mini-gun. The missile-launcher has 5 missiles that are a bit more advanced than regular flick-fire missiles; you need to push on pieces at the back to release them. The mini-gun has a part at the back you can spin and imagine bullets firing out. The surprise feature of the Mech is a transformation system that lets the robot-sidekick take control of the mech, and allow Jack to fly away in a small jet to launch a dual attack on the bugs (see video to see how the mech transforms). Jack’s pod comes with two flick-missiles. The 3 handguns can be neatly stored on the mech. On the legs of the mech you will probably notice those two things sticking out; they help to stabilize the mech so it doesn’t fall over.

Personally I really like this set. In fact it is my favorite in the LEGO Galaxy Squad line; it is really well designed, comes with lots of play-features and very nice minifigures for a reasonable price. If you would like to check out the Eradicator Mech and all the other LEGO Galaxy Squad sets you can visit the Online LEGO Shop. 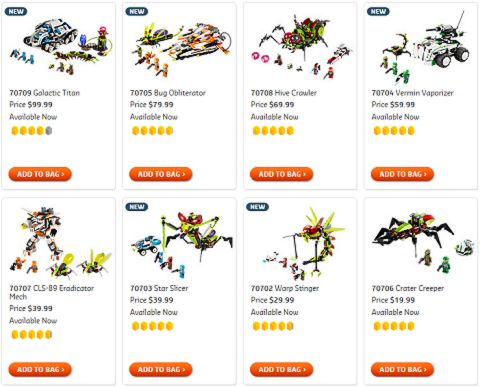 So what do you think? How do you like the LEGO Galaxy Squad sets? Do you own any of them? Which one is your favorite? And how do you like the Eradicator Mech? Feel free to share your thoughts in the comment section below! Also, I’m a TFOL (Teen-Fan-of-LEGO) and this is my first article here at theBrickBlogger. I hope you liked it and your feedback is welcome. Thanks for reading! 😀

Next post: Building a LEGO closet – a DIY project

Previous post: LEGO The Hobbit: The Desolation of Smaug