If you’re a LEGO Legends of Chima fan, you probably already know about the Chima Online game. If you aren’t, here’s a brief description: Chima Online is an upcoming MMORPG (a Massively Multiplayer Online Role-Playing Game similar to LEGO Universe, Warcraft, etc.), that is based on the LEGO Legends of Chima theme. Fairly surprisingly, before the beta release itself, LEGO managed to keep the gameplay under wraps rather well. Right now the open beta version is only available in the USA and Canada, and I’m rather surprised that it haven’t garnered more attention. Here is the link if you are in the USA or Canada: LEGO Chima Online Beta

As I have mentioned Chima Online beta is only open for North Americans, but before the beta was released there was an exclusive “pre-beta” (for lack of a better term) that you could access by getting a free code from a Facebook page (I forgot who’s page it was; something like Gamespot? Gamestop?). So that’s how I’m able to play the game even though I’m in Indonesia. Here’s a screen-shot of the access page of the Chima Online game that might send Chima fans writhing and twitching on the ground from excitement and jealousy. (Don’t worry; I’ll wait for you to stop convulsing.)

Done shaking? Alright. So basically I press the totally un-misseable PLAY button, and, after going through an incredibly long loading time – thanks to my slow connection – the following screen shows up. Please note that this image (along with some of the other images) were loaded on a slow connection. When my sister opened the site on a better connection, all the detailing of the minifigs showed up just fine. Here they just kind of look like silhouettes, don’t they? So just imagine they’re fully detailed. 😉 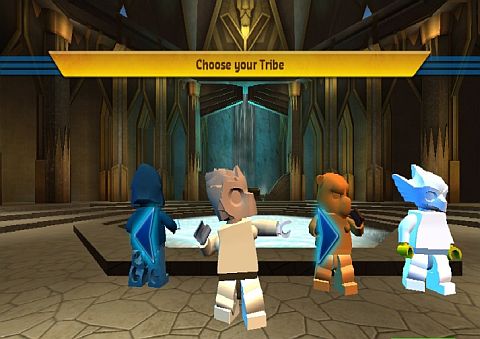 As you can see, you can pick one of four tribes. You’ve probably noticed that these are all the “good” tribes of Chima. (I guess the Bears’ allegiance is clear now, huh?) Yup, you can’t play as Wolves, Crocodiles or Ravens – or alt least not yet. I find this as rather a let down, since in some MMORPGs, you get to choose whether you want to serve the side of good or evil. There’s also no gender choosing; all the characters are males. Since boys are the main audience for the Chima Online game, this probably won’t bother them, but I was hoping for a bit more of a gender equality. Perhaps in the final version (remember; this is still beta) we will get a larger variety of characters with more options. 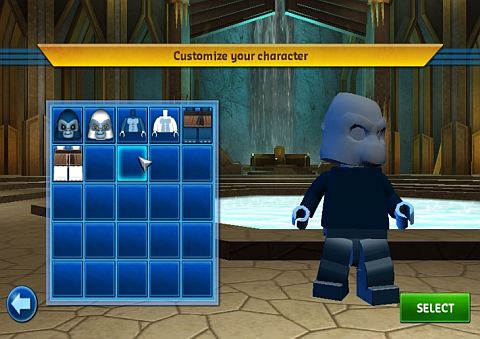 Once you choose your tribe – I chose the Gorilla Tribe – you can customize your character. All you can do though at this point is to change some colors. I opted for a black Gorilla, like Gorzan, but you could have chosen a white one like Grizzam or a dark-blue one. Likewise with the other tribes, customizing simply changes their looks to different templates based on already known Chima characters. As another example, choosing a Lion, you could pick a brown mane like Lennox’s, on orange on like Leonidas’, etc.

So let’s start this game already! Below is the very first thing you get when you begin the game. As you can see, Laval is standing right there to greet you. He will run you through the core basics of gameplay; click to move to a spot, click an item to pick it up, click an enemy to attack. Oh yes, he also teaches you the concept of CHI-Up, which I will explain below. 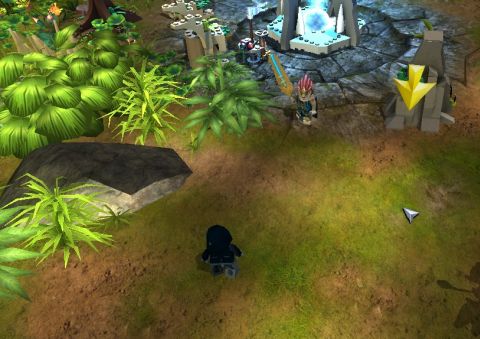 Enemies sometimes drop orbs of CHI, which will be yours to keep. When you’re in a cinch, simply press the CHI button (the blue button at the bottom-left bar), and suddenly a swirl of bluish stuff gathers around you and a transparent-blue version of that tribe’s Constraction Figure appears briefly, leaving you with a temporary stat-boost. Since Bears don’t have a Constraction Figure – or at least not yet – I wonder how they’ll CHI-Up? 🙄 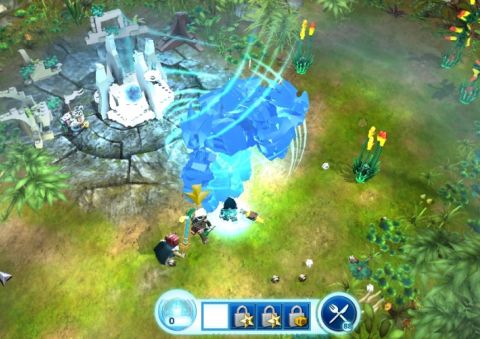 After completing the tutorial you can name your character. This is similar to the LEGO Universe or Hero Recon Team process; meaning you don’t get to make up any name, but you simply create a name from a list of words. So here we have Colonel Gristle Goatee! I think the name isn’t too bad. Once you are done with naming your character Laval does something that I find a very flawed logic: he entrusts this outpost to you, the player. Seriously?! Would you really entrust a nobody to captain an official outpost? Apparently, Laval would… 😕 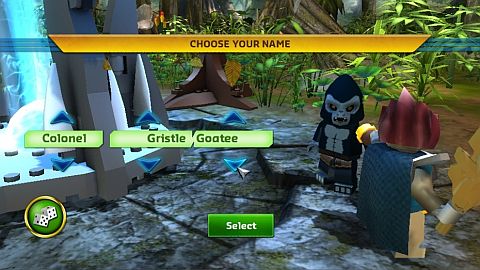 Below is a view of a variety of things you could do at your outpost. You can add friends (which I find reminiscent to some Facebook games), you can chat (an MMO mainstay), and you’ve got a life-bar with your face on it. Those yellow bricks are called “Gold Bricks”, a premium currency, rather like Playfish Coins in Pet Society for example. Gold Bricks are very hard to get, usually needing to be purchased with real money. Yep, Chima Online is a freemium game. Although since the game is still in beta you can’t buy any. Yet. That bar at the top is called the “Social Meter”, if I’m not mistaken. It fills up as you visit your friends. Once it’s full, you’re rewarded with Gold Bricks! 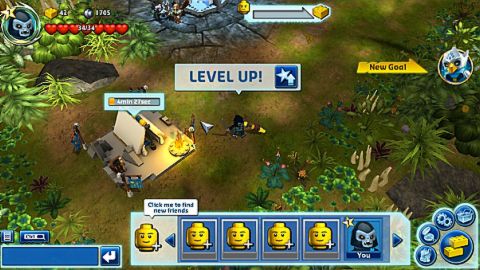 The tent-like structure is just one of the many buildings you can build at your outpost. Buildings have a variety of purposes; from manufacturing drones to helping you to a place for building weapons – provided you have the building instructions and the bricks. This building is essentially a stud-farm, slowly producing money for you. As expected, the process could be sped up by expending a Gold Brick.

The Eagle at the right is giving a Mission/Goal. Sometimes it’s the Eagle scout I forgot the name of, and sometimes it’s Lothar, a Lion soldier. Some missions are easy, like change your gear. Some are more challenging, such as defeating a boss! (Don’t worry; the first boss is only Crawley.) You’ve probably noticed the huge “Level Up!” bubble. Any gamer knows what it means. Note that you do need to press the blue button first to seal the deal, and to get rid of the bubble. I can’t quite remember what each and everyone of those icons do in the bottom right corner, but I’m sure the bag is to open, well… the bag… and the bricks symbol is to build and edit the buildings in your outpost. The rest can’t be too important so don’t fret…

Have you noticed that glowing blue shrine-thingie? That’s a portal. Really, it does what it says; it let’s you warp to wild, more hostile, but more exciting grounds. As you make your way, you will find other portals which you can activate and use as a shortcut between places. 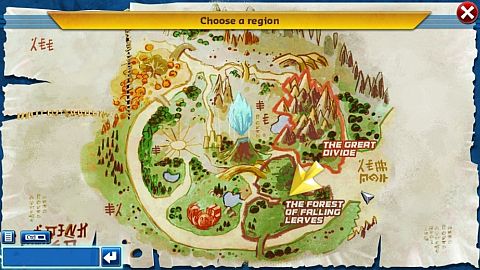 Alright. You’re in the wild now. There’s many things to see, but first of all let me show you the interface for the wild. There’s really only very little difference. The build icon is replaced by a home icon, which, when not in the midst of battle, can be pressed at any time to get back to the outpost. As you can see I can’t press it at the moment, since I’m fighting a croc. The whole friends thing is gone, replaced by a bar with the CHI button, some slots that are used for bringing in drones, and a place where you could put food items – handy to consume when your health is low. Otherwise, not too different from the interface in the outpost. 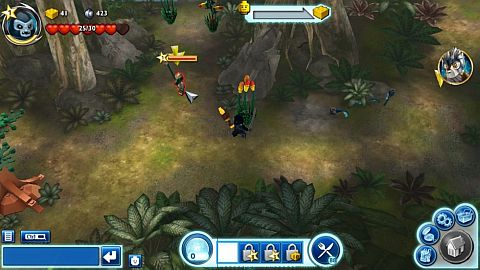 Here’s a show of my inventory. It’s pretty empty now. You start the game with only a blaster and a Katana (called a Katar). As you can guess, I’m being asked here to add the sash by dragging it to my silhouette (which, as I’ve said before, shouldn’t appear as so). The other picture shows the stats of the weapon, which I haven’t quite grasped myself, but you get the idea.

So, that’s the end of this lengthy post on the LEGO Chima Online game. Again, this is the beta version, so other features will likely be added before the final release. What do you think of the game? Have you had a chance to try it out yet? How did you like it? Feel free to share and discuss in the comment section below! Would love to hear what you think! 🙂