by Thita (admin) on September 7, 2013
in LEGO Minifigures

The LEGO Collectible Minifigures mystery bags are back with Series 11! And with that comes a whole new round of sore fingers trying to identify the minifigures. Hopefully we can ease some of the pain by giving you tips on what to feel for in each bag. This should cut down the time it takes to identify each collectible minifigure in this series. It should also be especially helpful for those who only want a few specific minifigs and don’t want to just blindly grab random bags.

Before we get started, I do want to point out that my technique of feeling for the minifigures usually involves ignoring the larger elements. I found that these pieces are more deceptive to the touch when it comes to identifying them. So typically I will suggest looking for smaller elements that can be identified more precisely. So let’s begin! 🙂 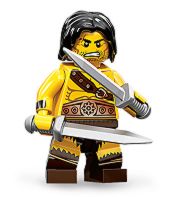 ➡ LEGO Minifigures Series 11 Barbarian: Despite that the Barbarian is one of the few minifigs in this series with hair, it is easy to mistake it for a helmet or mask. Especially the Welder’s mask feels really close to the Barbarian’s hair. So it comes down to finding the two swords. The hilt of the swords is their most distinct feature, with the flat blade having some flexibility. 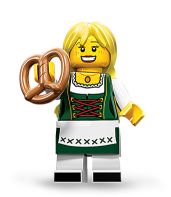 ➡ LEGO Minifigures Series 11 Bavarian Lady: Normally I’d suggest looking for the pretzel, but with the Mountain Climber’s rope being quite similar, you’ll actually have a better chance identifying her by looking for her hair-piece. It is a bit rubbery and feels very unique because of her two braids. They kind of feel like bunny ears! So try to find that piece first. 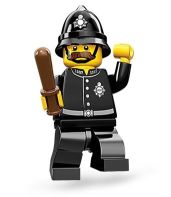 ➡ LEGO Minifigures Series 11 Constable: You’ll probably run across his helmet with no problem, however making sense of the helmet is another issue. Therefore, his billy-club is the thing to find. The problem though is that it is small, straight and can hide easily. But if you do find a small, straight piece with a bit of a ridge in the middle, that’s probably it. 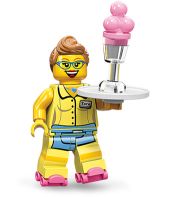 ➡ LEGO Minifigures Series 11 Diner Waitress: The skates on this minifig will definitely catch you off guard as will the ice cream top. Her hair is so close to the Scientist’s that it’s not worth your time trying to identify it. And the goblet feels very similar to the beakers the Scientist has. All that leaves is the platter. If you have a Waiter from the earlier series you can give yourself something to practice with; the platter is oval and very flat, except for one bump in the middle of one side. 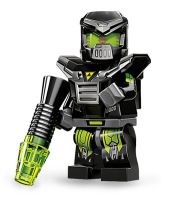 ➡ LEGO Minifigures Series 11 Evil Mech: If you got the previously released Battle Mech from Collectible Minifigs Series 9, this one is almost the same minifigure. The nice thing is that it also comes with a cone and megaphone piece to make up the gun. The cone can get a little tricky to make out, but if you stick with trying to find the megaphone, you’ll be in good shape. 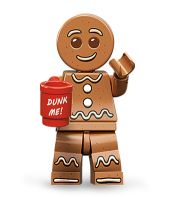 ➡ LEGO Minifigures Series 11 Gingerbread Man: The head of the Gingerbreat Man is really unique.  It’s a fat round element that feels like a chunky chewable vitamin. Of course if you ignore the large elements like I do, you will more than likely find the coffee mug. The mug is surprisingly easy to make out so you should have no problem finding it. 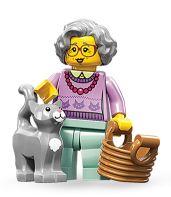 ➡ LEGO Minifigures Series 11 Grandma: Normally, the cat would be a great piece to look for, but if you’re not careful you can mistake it for a minifigure torso as you are feeling through the baggies. All that really leaves for good identification is her basket. Just keep in mind that it is rubbery, which makes identification a slow process. The Grandma minifigure is very rare, only two per full box, so feel lucky if you find her! 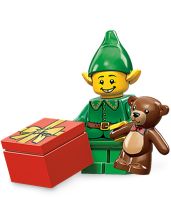 ➡ LEGO Minifigures Series 11 Holiday Elf: Take your pick; pointy hat, teddy bear, 2×2 tile, or 2×2 brick. They are all distinct and easy to find, making the Holiday Elf one of the easiest minifigures to identify in the series. I personally go with either the 2×2 tile or 2×2 brick to confirm that I have the Elf. This minifig will likely be very popular for the year-end holidays, so try to get one while you can. 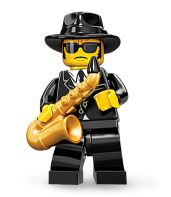 ➡ LEGO Minifigures Series 11 Jazz Musician: There’s no getting around the fact that you need to find the saxophone if you would like to identify the Jazz Musician. The hat is too close to the Scarecrow’s hat and the Jazz Musician doesn’t have much else to feel for. Fortunately, the saxophone feels pretty much like how it looks, so it shouldn’t be a problem identifying it. 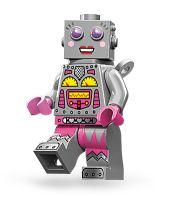 ➡ LEGO Minifigures Series 11 Lady Robot: This is nearly an exact copy of the Clockwork Robot from LEGO Minifigures Series 6. Among its elements the two that really stand out are the neck-bracket and the square head. The turn-key is unique, but it tends to be hard to pin down while feeling through the baggie. I personally go for the neck-bracket for clear identification. 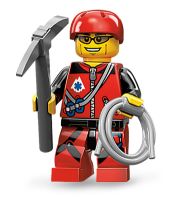 ➡ LEGO Minifigures Series 11 Mountain Climber: The rope is a unique piece, but it can be mixed up with the Bavarian Lady’s pretzel if you are not careful. Therefore, the pickaxe is the way to go. It is large without being confusing, and really hard to miss with its unique and easy to identify shape. Also, there is no other piece within this series that is similar to the pickaxe. 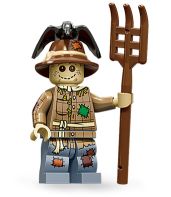 ➡ LEGO Minifigures Series 11 Scarecrow: The crow is like Tonto’s from the LEGO Lone Ranger sets, but it’s the pitchfork that will lead you straight to identifying this minifig. It’s big yet simple design can only be confused with the Tiki Warrior’s spear. Just take some time to feel out what’s at the head of the tool before you drop the baggie in your shopping-basket. 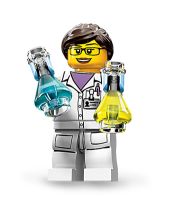 ➡ LEGO Minifigures Series 11 Scientist: With all her parts and accessories being very close to the Diner Waitress’ you’ll need to take some time to find both of the bottles. Finding only one bottle can get confused with the Diner Waitress’ goblet, so be careful there. But when you do have two bottles identified it’s fairly sure you got the Scientist. 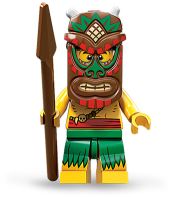 ➡ LEGO Minifigures Series 11 Tiki Warrior: With a large rubbery mask, this fig can throw you for a loop. Plus the bone that goes in his hair is a bit weird when you find it. So it all comes down to the spear. It is the original spear design so it won’t bend at the tip like the new version. Hopefully your LEGO collection has exposed you to enough of the classic LEGO spear that you will have no trouble to find it. 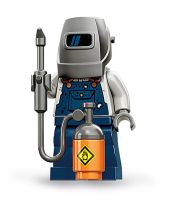 ➡ LEGO Minifigures Series 11 Welder: Even though he has a lot of special equipment, the Welder can still be best found by the simple 1×1 round brick. His mask feels like other head accessories, and his torch is too thin and rubbery to rely on a tactile approach to find it. Just make sure that the 1×1 round brick is not the Evil Mech’s cone and you’ll be fine. 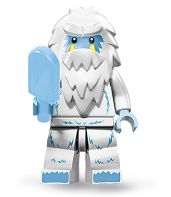 ➡ LEGO Minifigures Series 11 Yeti: Big Star Wars fans may think they have found a Wookie head piece. Frankly, its hard to argue against how it feels quite similar. However, since I typically ignore the larger elements, I am bound to find the popsicle. Thankfully it is really hard to think of the popsicle as any other piece, nor is there another element in the series that is similar, so it is really easy to identify. 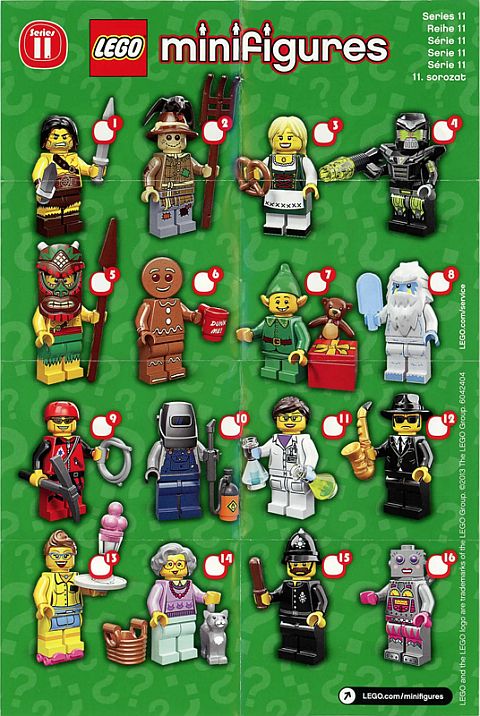 Hope this helps with your LEGO Collectible Minifigure hunting! They have been showing up at Toys’R’Us, Wal-Mart, Target, and other retailers, and are also available at LEGO stores and at the Online LEGO Shop. If you have your own tips and tricks on identifying them feel free to share in the comment section below! 😉