Please note that the two new LEGO Minecraft sets are not considered CUUSOO projects, so don’t get confused when you go to the Online LEGO Shop and you don’t find them under the CUUSOO section; you will only find the first set there. If you would like to see all three of the sets you need to go the newly added LEGO Minecraft section. 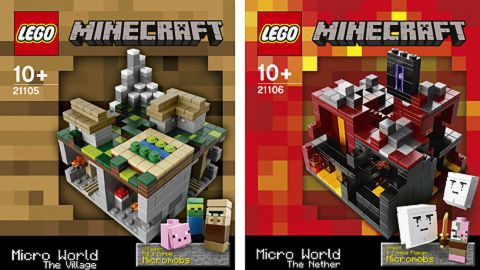 ➡ #21105 LEGO Minecraft Micro World – The Village: Create your own Minecraft village, all with LEGO bricks! Every Minecraft world has a village hidden somewhere. Create and customize your own, all with LEGO bricks. In this LEGO micro-world you can build your houses and grow the crops, but watch out for the aggressive Zombies that menace the Villagers. Below the village is a mine, so beware of the TNT when you go wandering, as the walls can explode. Comes with 3 buildable Micromob figures: the Pig, the Villager and the Zombie. 466 Pieces. Price: $34.99. – BUY HERE

➡ #21106 LEGO Minecraft Micro World – The Nether: – Build The Nether, where Ghasts fly and the Zombie Pigman patrols… if you dare! Travel through an Obsidian Portal and find yourself in The Nether! This is a place like no other, with Netherrack, gravel and bedrock. Watch out for flowing lava, flying Ghasts and the patrolling Zombie Pigmen! Now you can re-build it all with LEGO bricks, complete with a portal. But remember… enter at your own risk! Includes 3 buildable Micromob figures: 2 Ghasts and a Zombie Pigman. 469 pieces. Price: $34.99 – BUY HERE 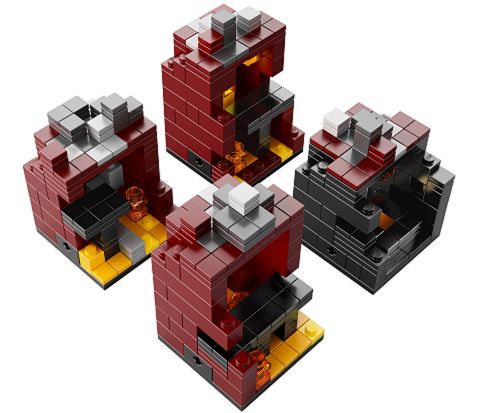 You can find all three of the LEGO Minecraft sets at the Online LEGO Shop. I know these are going to be extremely popular, especially now that there is a series. You can finally build a much bigger and more reasonable Minecraft world than you were able to do with just the first set. The sets are also great sources for small LEGO parts in rare colors, so they should be popular with LEGO micro-builders as well. 🙄

If you are planning to purchase the new LEGO Minecraft sets, don’t forget that shipping is free over $75, and in the month of September you will also get a really cute mini version of the LEGO VW Camper with your order! And you might also like to check out the following related posts: