In this series we are going over a few basic LEGO techniques and ideas for building a good LEGO MOC (My-Own-Creation). I’ll be taking examples from several LEGO builders to give you a good idea of different styles and possibilities of the techniques covered, though unless otherwise specified, the examples are mine. We’ve already covered Building with LEGO – Bases & Borders, Building With LEGO – Beautiful Landscaping, and Building with LEGO – Customize Your Minifigs, and now we are ready to tackle LEGO buildings and LEGO vehicles . 🙂 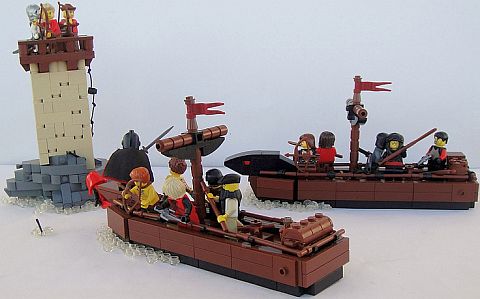 Buildings, of course, is quite a broad category, even in the narrower sense of edifice. A general rule to keep in mind for making LEGO buildings (and anything that is designed to look man-made) is symmetry. Color choice can also contribute to the desired effect. Dark-gray looks bleak and bare. Yellow, blue, and green look bright and happy. Tan, white, light-gray, and other lighter pastel colors look more normal in a city setting. To make the topic of LEGO buildings a bit easier to handle, let’s divide it up into ancient buildings (middle ages and previous), modern buildings, and futuristic/fantasy buildings.

➡ ANCIENT LEGO BUILDINGS: Castles, pyramids, cottages, stone houses, and maybe a few older things like ziggurats and ancient statues are some of the main types of constructions that fall under this category. Most of these type of buildings use stone as a building material. For castles, long walls, and other large stone structures, adding subtle texture or color variations at random intervals can help break up the monotony of a plain gray wall. Do be careful though, it’s possible to overdo it! Using just a touch of dark-gray in a light-gray wall can liven things up. Or, if you prefer sticking with the same color, a few round 1×1 plates add an interesting texture variation. In fact, for a LEGO stone house or foundation, using just 1×1 rounds (as in the example below by Derfel Cadarn) creates a very nice effect. 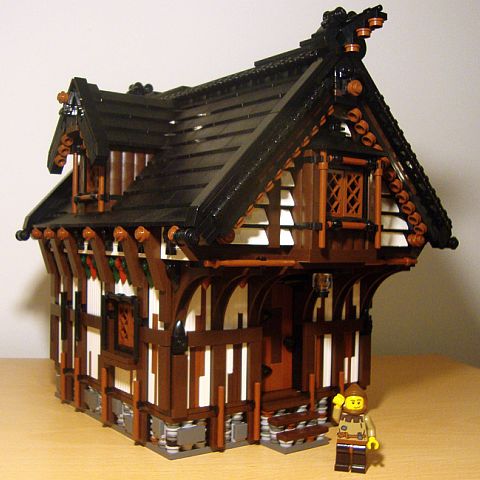 Cottages are usually fairly small, mainly white, tan, or some other light color, with brown or black around the corners. A sideways strip of brown across the wall adds to the general effect. Roofs can be made using LEGO SNOT (Studs-Not-On-Top) techniques with log-bricks or LEGO plates attached sideways. Height variation helps with the plates especially. Yet a third type of house can be built using logs, either sideways to create a log cabin, or upright.  This kind of wall works better for an interior than an exterior scene. There are plenty of examples of these types of buildings;  Orðlokarr Castle by Mark of Falworth, Friends in Low Places by Gary^The^Procrastinator, Granovian Seaport by Sir Edwin, Recruiting Office by Robert4168, and Ras-el-Jabar by Fianat.  Below is an example by Moriartus that uses quite a lot of LEGO cheese-slopes! 😀 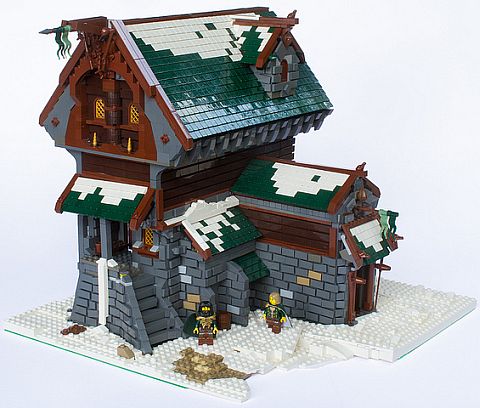 ➡ MODERN LEGO BUILDINGS: Most modern buildings are huge compared to a person. However, this isn’t always feasible for a LEGO minifigure – imagine making an exact replica of your house at minifigure-scale and you’ll see why! Even the LEGO Modular Buildings – such as the Grand Emporium – aren’t quite the right size (most supermarket roofs are at least three times average height of a person!). Still, for a minifigure, 6-11 bricks high is plenty to make a building look fairly realistic. Usually modern buildings (especially stores) concentrate most of the detail on the front. A house is generally fairly plain but does have lots of texture – so try to keep that in mind while building. Larger buildings can have plenty of flat walls on the sides without looking plain. I myself don’t build modern buildings that often, but below is an example by kjw010. 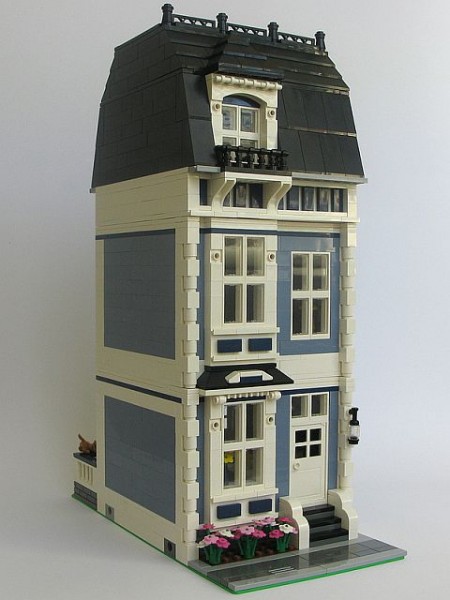 ➡ FUTURISTIC/FANTASY LEGO BUILDINGS: Futuristic buildings usually have lots of neon lights and detailed little bits, levers, grills, and pieces like that. Typically there’s not a whole lot of plain space on this kind of building. Fantasy buildings, on the other hand, can be virtually any shape, color, or size you can think of! This article contains excellent examples, but only your imagination is the limit here!  Other examples of unique (and sometimes unrealistic) buildings include, Twin Towers by LL, Skyholm – The Flying City by Fianat, Above the Clouds by Cara lego, and the one below by Nannan Z. 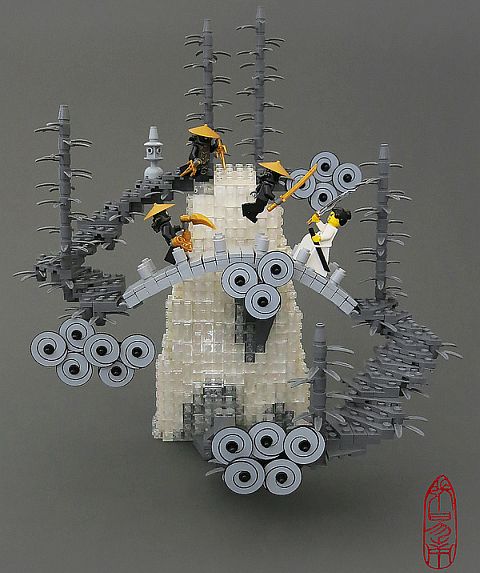 ➡ LEGO VEHICLES: Vehicles range from huge ocean-liners to little get-around cars to ancient chariots, so we’ll just get to touch on the most basic points here. Modern vehicles usually have quite a few details, as well as a nice sleek metallic look, which can be tough to recreate with studded LEGO bricks! As we discussed in the buildings section above, most minifigure sized LEGO creations aren’t quite to scale, and the same applies to vehicles – so keep that in mind while building.  I don’t have much experience building these type of vehicles, so I don’t have many tips to share, but a few examples that might get your creative juices going are Jeep Wrangler: 2.0 Edition by .Bricko, Ford Taunus 17m deLuxe by mijasper, CVF-104 by 4estfeller, and a highly unique Friends Butterfly Campervan by kjw010.

Medieval style carts, wagons, and chariots were typically made out of wood with a minimum of metal. Steampunk vehicles also look good with brown but include lots of gears and golden details. Futuristic vehicles, on the other hand, are predominantly gray (in most cases) and have lots of detailed bits and pieces, including levers, grills, clips, and steering wheels. Below is an example of a futuristic SHIP (Seriously-Huge-Investment-in-Parts) my brother and I built: 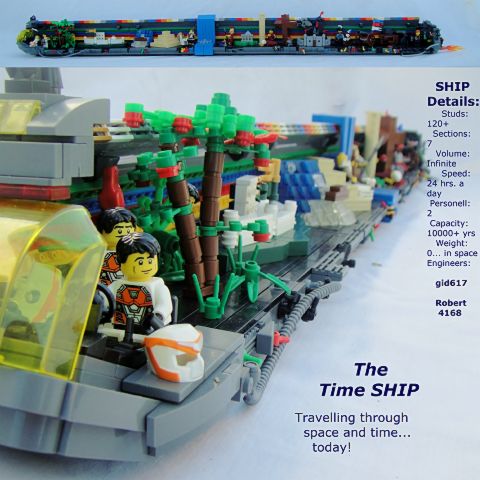 So these are just some basic tips to get you started on LEGO buildings and LEGO vehicles, and will hopefully give you some inspiration and ideas. How about you? Do you have any tips to share? Where do you get inspiration for your LEGO creations? Do you prefer a certain time period? Do you tend to build really large scale or prefer smaller creations? Feel free to share your thoughts and discuss in the comment section below! 😉