Today I would like to bring to your attention a charity-auction run by LEGO fan Paul Boratko. Paul is well known in the LEGO fan community due to his amazingly detailed LEGO supercars. His LEGO models have been featured in magazines, at museums and LEGO shows, and on many websites. You can check out his models at his website CrowKillers.com, his LEGO projects on CUUSOO, and his eBay auctions

where he sells some of his best LEGO models as well as instructions. 🙂 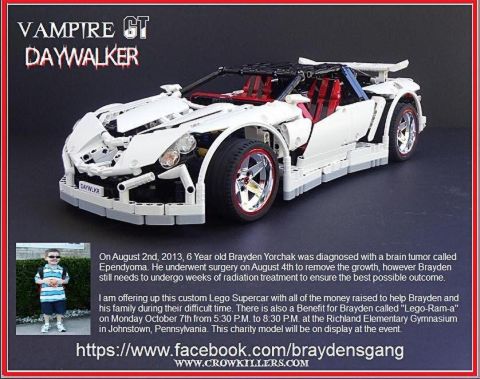 Paul is currently auctioning off one of his LEGO supercars, with all proceeds going to Brayden Yorchak, a 6-year-old child who was diagnosed with a brain tumor called Ependyoma on August 2nd, 2013. He underwent surgery on August 4th to remove the growth, however Brayden still needs to undergo weeks of radiation treatment to ensure the best possible outcome. All of the money raised through the auction is going to help Brayden and his family during this difficult time. 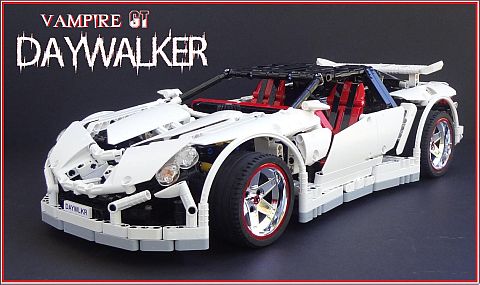 Below are the details of the custom LEGO supercar up for auction for this charity event. This is considered one of Paul’s best and most detailed designs: LEGO Technic 2013 Vampire GT Supercar “Daywalker” Edition

If you are interested in this LEGO charity-auction, you can find it on eBay at the following link: Crowkillers Custom LEGO Technic 2013 Vampire GT “Daywalker” Supercar for Charity

. Please note that there are only a few days left before the auction closes. You can also check out some of Paul’s other eBay listings with his LEGO supercar designs. Some of them are fully built models, others are instructions only. You can check them out here: Custom LEGO Supercars by Paul Boratko on eBay

LEGO charity-auctions are a win-win for everyone. The winning bidder receives an awesome LEGO model while knowing that the money raised will help someone in need, and the model-builder also gets the satisfaction of helping out through their hobby. As the holidays draw closer there will be other LEGO fund-raising events. The LEGO community is very generous at heart and runs such events every year. Look out for updates on other opportunities where you can help by donating your time, money, LEGO sets, or even custom-built LEGO models. And if you know of an upcoming LEGO charity event feel free to share in the comment section below. 😉