Today I would like to introduce you to a family that has been running a long tradition of helping others during the Christmas holidays with their LEGO project. Eric and Kristy Carlson, and their children Brandon & Aidan, live in Omaha, Nebraska. Back in 2008 they made LEGO ornaments as gifts for extended family, and thought it would be a good idea to also sell them to raise money for charity – thus Ornaments4Charity.com was born. We have actually mentioned their project briefly last year in The Best Christmas LEGO Ornaments! post, as they had such nice designs. 🙂

Each member of the Carlson family has a job (or two) in order to build, sell, and ship the LEGO Christmas ornaments. Eleven-year-old Brandon is the manager, spokesman, and LEGO Master Builder. He also tracks inventory, orders, and profits. Seven-year-old Aidan is the Assistant LEGO Master Builder specializing in Mini Diggers, Penguins, Tie-Fighters, Z-95 Headhunters, Bluejays, and Nutcrackers. Mom Kristy is responsible for website and product development, LEGO ordering, and super-glue application. Dad Eric runs the shipping department and motivates the LEGO Master Builders. Even Grandma and Grandpa helps out sometimes! 😀 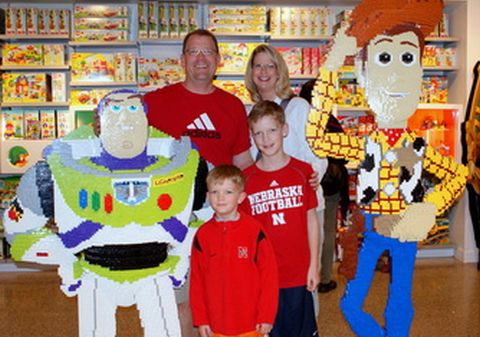 Ornaments4Charity.com began in 2009 resulting in a $1,200 check to the Food Bank for the Heartland to fill 250 weekend backpacks for hungry kids. In 2010 the family donated kid-friendly hygiene items for 400 children at the Open Door Mission Lydia House valued at $4,500. Proceeds of $3,250 were used in 2011 for fleece blankets, tear-free shampoo, and kid-friendly oral hygiene items to support the Stephen Center. Last year profits of $3,770 benefitted the Sienna/Francis House who received winter gear for 300 children, 456 pairs of underwear, and 1534 pairs of socks. To date the Carlson’s have used almost 84,000 LEGO bricks and sold over 2,000 ornaments. Customers in 38 states and Canada have made purchases at their website for Christmas LEGO ornaments.

2013 marks the fifth year of the family project of selling Christmas LEGO ornaments to benefit others. This year 100% of the proceeds will benefit children supported by the Stephen Center homeless shelter and a local domestic violence shelter. The Carlson boys have set a fundraising goal of $5,000 for this season. Proceeds from the 2013 sale of the Christmas LEGO ornaments will be used to purchase infant/toddler supplies (diapers, wipes, formula, OTC medicine, clothing, mittens, and hats) for young residents and children in the community who are supported by these two local organizations. Stephen Center, Inc. has served the homeless and low-income men, women and children in Omaha since 1984. Stephen Center is the only “dry” emergency shelter in Omaha, focusing on assisting those who have made a commitment to overcome the life destroying effects of drugs and alcohol. You can read more about them here: StephenCenter.org 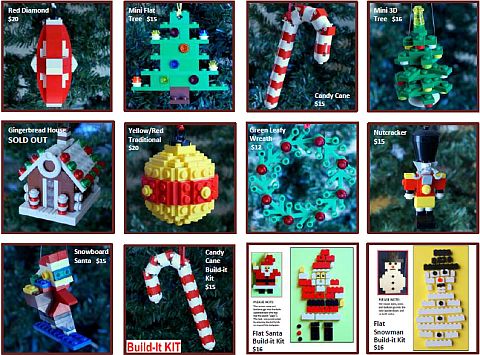 If you would like to help out and support this LEGO project, Ornaments4Charity.com has a great selection of LEGO Christmas ornaments; some are traditional ornaments like a LEGO Santa, LEGO Christmas tree, LEGO candy cane, LEGO snowman, etc. Some are cute little LEGO sets like a car, airplane, penguin, cupcake, or even a Batmobile and Star Wars starfighter. Although most of the ornaments are glued to make sure they won’t fall apart during transit or while you are hanging it up on the Christmas tree, build-it-yourself LEGO ornament kits are also available. You can check out the full selection here: Ornaments4Charity.com

If you have any questions for the Carlson family about their LEGO project you are welcome to ask in the comment section below, and you can also visit their website for more information and frequently asked questions. Your thoughts and feedback are welcome! Happy Holidays!