Lots of LEGO Ninjago news today, so let’s start with first things first: the 2014 LEGO Ninjago sets have been officially released, so now you can go to the Online LEGO Shop (and as well as LEGO stores) to pick them up. Finally! They should also be available at all LEGO retailers. Expect these to sell out quickly as Ninjago fans have been starving for new sets for a year now! 🙂

The LEGO Ninjago website has been completely redesigned and now focuses on the 2014 LEGO Ninjago season. First of all there is another new trailer (you can see the previous trailers here), which gives us more clues about the new season, so we can further discuss what’s coming. Exciting?

Secondly, the updated LEGO Ninjago website features all the 2014 Ninjago sets, so if you want to take a good look before making a purchase, you can see them all under the Products tab. The Online LEGO Shop also has excellent close-up pictures of the new Ninjago sets; you can see those here. 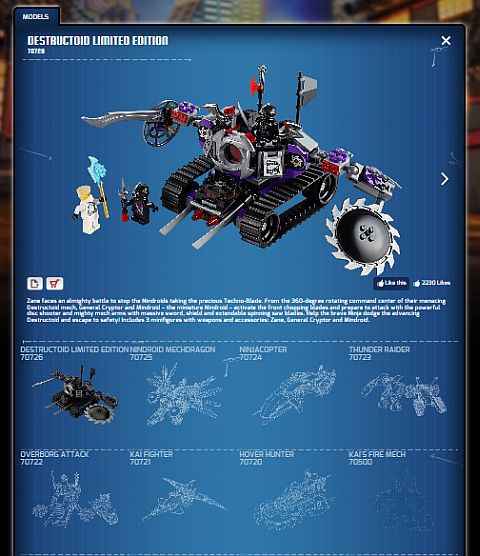 One of the most interesting sections of the new Ninjago website is the Characters section. You can learn all about the 2014 Ninjago characters like Cyrus Borg, General Cryptor, and P.I.X.A.L., as well as the evil droids like the Nindroid Drones, Nindroid Warriors, and one fun character Min-Droid. And of course the bios for Sensei Wu, Sensei Garmadon, Nya and the ninja have also been updated (also listed below for your convenience). 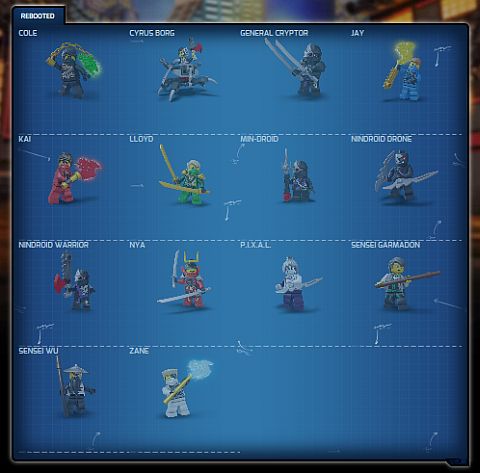 ➡ SENSEI GARMADON: Garmadon is the brother of Sensei Wu. As a young man, he was bitten by The Great Devourer and became Lord Garmadon. Merciless and sinister, he became an enemy of Sensei Wu and the ninja team. It was only when the Overlord was defeated that Garmadon was freed from the darkness. He no longer believes in violence of any kind, and is focused on trying to raise his son, Lloyd, the right way. But is he really reformed, and can he stick to being peaceful in the face of the Nindroid threat?

➡ LLOYD: Lloyd Garmadon is happy that his father is free of the Overlord’s influence. But after so many years apart, it is a lot of work getting used to being father and son again. On top of that, Lloyd’s gold ninja power has made him a target of the Digital Overlord and a potential danger to the world. Lloyd sometimes misses being just a normal boy, but when you’re the golden ninja, it’s hard to just go out and play catch with Dad (you wind up throwing the ball straight through tree trunks).

➡ COLE: Cole is the ninja of Earth. He is disciplined, responsible, strong and a good planner. In the past, he has had a big job to do keeping his more emotional teammates under control. But now he is more relaxed and willing to let others take the lead sometimes. Cole always tries to keep his feet on the ground, even when he is doing Spinjitzu.. Kai jokes that Cole is the only ninja he’s ever heard of who brings a book to battles, so he won’t get bored. Cole was a student at the Marty Oppenheimer School of Performing Arts as a dancer … for two days. Cole likes all kinds of climbing: Rock climbing, cave climbing, tree climbing and dragon climbing … whatever that is! Cole’s favorite color is actually orange … but don’t tell anyone. When Cole was a child his friends jokingly called him Cole Bucket.

➡ JAY: Jay is the ninja of Lightning, a talented inventor with a crazy sense of humor and a huge crush on Nya. He loves all the new technology around today, although his efforts to take it apart and figure it out have led to more than a few explosions. He even has a Cyrus Borg poster on the wall of his room. Although the ninja have been through many fearsome fights, Jay is still the same fast-talking adventurer he has always been. Even Nindroids cannot get this ninja down. But he can sometimes make his teammates crazy! When Jay uses his electrical powers to his fullest, he creates 1.21 gigawatts. Jay once invented a Spinjitzu powered slingshot … but it back fired. Sometimes Jay wakes up in his sleep because he accidentally zaps himself. Jay’s favorite dancing style is electric boogie. Jay and Nya once went dancing on a date, but it spun out of control.

➡ KAI: Kai is the ninja of Fire, and though he is a hero now, he came from humble beginnings. His father was a trusted ally of Sensei Wu and the two adventured together for many years. Wu would later hide the map showing the locations of the Four Weapons of Spinjitzu in his friend’s blacksmith shop. Kai was the last member recruited for the team by Sensei Wu and the last to achieve his full potential (which happened when he saved Lloyd from the belly of an active volcano!) He can be hot-headed and impatient, but is trying to control that. For the first two months of his life his parents called him Ash. Kai once by accident forged a weapon called a ‘Swingana’ … Part yo-yo part sword. It was not a big success. When Kai uses his elemental power in a vehicle, it gets powered up and engulfed in flames … which is why flying a hang glider is a bad idea. Once Kai singed off his eyebrows with the sword of fire. But no one noticed because he painted the back on with a black marker. When Kai’s sister Nya was a baby, he used to juggle hammers to entertain her. When he dropped one on his foot she laughed the hardest.

➡ ZANE: Zane is the ninja of Ice. He was known in his village for being able to sit at the bottom of a freezing lake for an incredibly long time (something it turns out he was able to do because he is a robot). Although being a machine has not changed his friendships with his teammates, it does sometimes make him feel different and a little lonely. Zane’s blueprints end up being used to create the Nindroid army, which inspires him to fight this new foe even harder. While still very logical and practical, meeting P.I.X.A.L. causes him to feel all new emotions.

➡ NYA: Nya is Kai’s sister and has proven herself to be a hero many times. When the ninja team first formed, she had a hard time getting into the action. She was never trained in Spinjitzu, but still wanted to be part of the adventure. By disguising herself as Samurai X, she showed she was just as capable as Kai or any of the others. She is now a valued member of the team, capable of taking charge in a crisis. Nya has always wanted a chance to make a real difference in a fight – she is about to get her wish. Nya’s first version of her Samurai X mech was blue … which is her favorite color. Nya has the high score in ‘Fist to Face 2’ but she keeps it a secret because she doesn’t want to upset her brother. Nya’s bracelet originally belonged to her mother. When Nya was two years old, she always slept with a plush dragon she called Sparky. Jay’s Mother Edna has a photograph of Nya and Jay in her wallet. Jay is still looking for it … he must have lost it somehow.

➡ GENERAL CRYPTOR: General Cryptor is the robotic leader of the Nindroid army, and a servant of the Digital Overlord. Unlike the Nindroids, who rarely speak, Cryptor talks all the time. He loves to taunt and insult his foes in battle, and has even been known to criticize his own troops (saying they are as stealthy as a herd of hungry yaks). Cryptor’s emotional programming is also more advanced than that of the Nindroids, and his quick temper can be used against him. Cryptor dismisses the ninja as a serious threat to his army. That may be a mistake that comes back to haunt both him and the Digital Overlord.

➡ CYRUS BORG: A skilled and imaginative inventor, Cyrus Borg saw the damage done to NinjagoCity by the battle with the Overlord as an opportunity. He rebuilt the place as New Ninjago City, packed with high technology upgrades, and built the Borg Industries complex right on the site of the Overlord’s defeat. Borg’s successes have been many, but his few failures have been spectacular as well (the electronic papercut carving set, the electric bath mat, the nuclear toothbrush, the turbo-jet powered, sub-orbital golf cart, etc.). “When I make a mistake, I make a big one!” he has been known to say.

➡ NINDROIDS & NINDROID WARRIORS: Nindroids are high-tech fighting machines manufactured based upon the blueprints of Zane. But they are the next generation of artificial warriors, stronger, faster, and more agile than Zane has ever been. In addition, they have cloaking abilities that let them turn invisible. This mechanical army serves the Digital Overlord. Where Zane is able to feel friendship and more, Nindroids have no emotions. They are completely cold and totally focused on accomplishing their mission. Nindroids cannot be reasoned with or frightened off and they will only do strategic retreats if it seems that defeat is inevitable.

➡ MIN-DROID: “Min-Droid” is a nickname given by General Cryptor to a small version of a Nindroid. Cryptor jokes that the manufacturing process must have run short of metal, which would explain Min-Droid’s size. Min-Droid is different from standard Nindroids in ways besides his height – for example, he is very sensitive about his appearance and quick to anger when insulted. Although miniature, Min-Droid is still dangerous. The ninja would be smart not to underestimate this robot.

➡ P.I.X.A.L.: P.I.X.A.L. (Primary Interactive X-ternal Assistant Life-form) is Cyrus Borg’s android assistant. When she first meets the ninja, she is under the influence of the Digital Overlord and uses her skills to copy the plans for Zane so the Nindroids can be built. She is cold and mechanical and incapable of any feeling for anyone. P.I.X.A.L. is actually the 16th model in her line, the first 15 having malfunctioned due to a faulty thermo-coil and a malfunctioning AIE-ES (artificial intelligence enhancer-emotion suppressor) chip. Borg was able to fix the coil, but the chip problem has not been completely solved.

Personally I’m very excited about the ninja/nindroid mesh-up of the story. It is fresh, interesting, and exciting. Can’t wait for the episodes to start! What do you think? How do you like the 2014 LEGO Ninjago sets? Have you gotten any of them yet? And have you checked out the new website? What about the latest trailer? Any new interesting details that you have noticed? Feel free to share and discuss in the comment section below. 😉