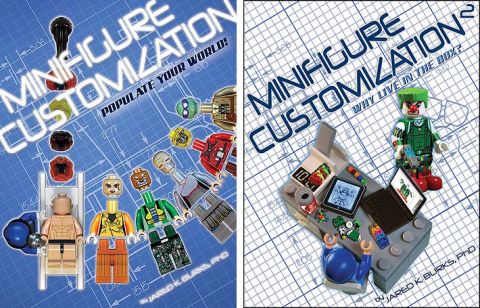 ➡ MINIFIGURE CUSTOMIZATION: POPULATE YOUR WORLD! – This was the first book published by Jared. It is a 78-page paperback published by TwoMorrows Publishing. The book goes though every aspect of customizing LEGO minifigures, including designing and applying decals, using paint dyes and more, and making custom parts and accessories for your minifigures using fabric, paper and other materials. It also discusses in detail clay sculpting, molding and casting. Once you create those incredible custom minifigures you will likely want to display and photograph them for others to see – these topics are also covered in detail at the end of the book. 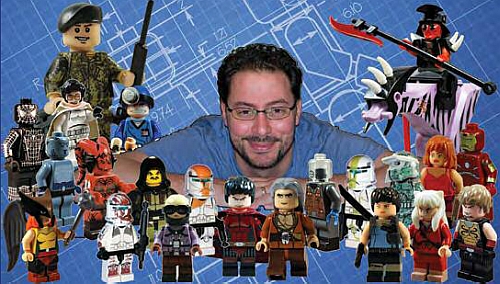 This LEGO book is a hands-on, do-it-yourself manual, so all the tools, materials and equipment you will need for customizing your LEGO minifigures are listed, along with prices and where to get them. Also step-by-step instructions are included for learning and applying the different processes and using the various tools mentioned.

Minifigure customization is a very creative and pretty much unlimited art-form that takes the LEGO hobby to a whole new level. Some people prefer to stick with what LEGO gives us in terms of elements and minifigures, but if you choose to do so, you can go much beyond that and enter a whole new world of what is possible with LEGO. This book gives you all the tools, tips and tricks to begin and become an accomplished LEGO minifigure customizer yourself. 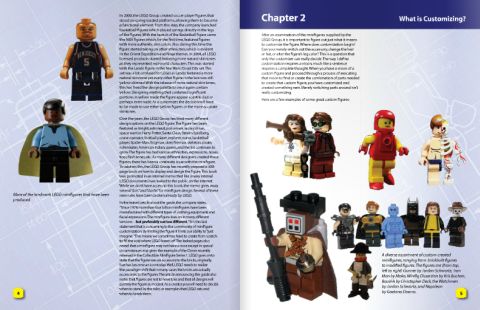 Here is the official description of this LEGO book: Minifigure Customization: Populate Your World! shows you the wide range of techniques you can use to alter the lovable LEGO Minifigure into any character you can imagine! BrickJournal columnist and author Jared K. Burks (known online as Kaminoan) has created thousands of custom minifigs over the last 13 years, and this full-color book assembles his knowledge into a series of step-by-step tutorials on decal design and application, color alteration, custom part modification and creation, plus tips on minifigure displays and digital photography to capture your custom figures in the best light—all the way through complete custom figure creation! Essential tools are identified, plus there’s a tips and tricks section, and a gallery of some of the best custom figures ever created! Don’t live inside the box—populate your world with any alien, superhero, historical, action, horror, or science-fiction figure you can “just imagine”!

➡ MINIFIGURE CUSTOMIZATION: WHY LIVE IN THE BOX? – This book was just published recently and it is an update as well as continuation of the previous book. Since the first book was published something very important happened in the world of LEGO; a lot more focus on minifigures by The LEGO Group itself. The LEGO Minifigure Series has been released with a whole array of new characters and accessories, as well as almost all LEGO themes now come with a lot more minifigures with significantly more detailed printing and detailing. 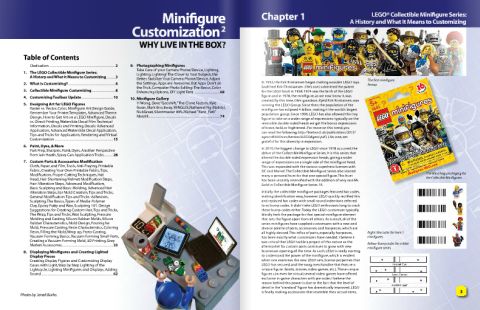 You would think that LEGO releasing more detailed minifigures and more accessories would slow down the LEGO customization hobby. After all the reason LEGO customization began in the first place is because there was a lack of variety in what LEGO was giving us. But in fact the contrary has happened. The new minifigures and elements given by LEGO provided even more opportunities to LEGO customizers, only fueling their creativity. Also, the advancement in technologies like 3-D printing, printing directly on plastic, and design software – as well as prices of these technologies coming down – opened up the possibilities of making professional custom minifigures and minifigure accessories easier and more affordable.

The second book addresses these developments, spending more time talking about the new technologies available for LEGO customizers. Also, many of the subjects covered in the previous book about customizing LEGO are either repeated, or updated with new information and resources. 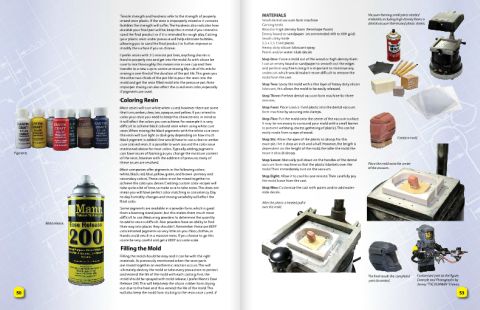 Here is the official description of this LEGO book: If you enjoyed Minifigure Customization: Populate Your World!, don’t miss the sequel, Minifigure Customization2: Why Live in the Box? MC2 takes an advanced look at the hobby, introducing more complex techniques to alter the lovable LEGO minifigure, and building on the techniques introduced in the first book. It features tutorials on virtual customization; designing decals and advanced decal application; custom part modification and creation, including 3-D printing; advanced painting techniques; lighting figures with LEDs or EL wire; tips on minifigure displays; and digital photography tips to capture your custom figures in the best light. Essential tools used to create custom figures are identified and updated, and it even includes a Gallery of custom minifigures from top customizers, where they share their favorite tips and tricks. Why live in the box? Populate your world with any alien, superhero, historical, action, horror, or science-fiction figure you can “just imagine!”

So the next logical question would be “Do I need both books if I want to learn LEGO minifigure customizing, or should I just get the updated second book?” If you want to get deeply into LEGO customization I would suggest to get both books. Even though some of the information is overlapping and repeated in the second book, they are different enough that it is worth getting both. In the first book some of the low-tech methods are explained and illustrated in more detail, and also the featured custom minifigures and accessories in the two books are different.

If you can only get one LEGO book on customizing, I would suggest the second one as it will cover everything you need to know about minifig customization. And maybe later you will decide to pick up the first one too for the sake of completeness. I own both of the books and I enjoy using and referring to both. You can get either or both of the books directly from TwoMorrows Publishing and through Amazon:

If you have read and used either of the Minifigure Customization books and would like to share your own review feel free to write your thoughts in the comment section below. And if you have any questions about these LEGO books don’t be shy to ask. 😉