We have talked about The LEGO Movie and The LEGO Movie sets several times (see links at the end of this post), and today I would like to share with you some more; there is another trailer with some fun details we haven’t seen before, and more updates to The LEGO Movie website. So let’s check them out! 🙂

At The LEGO Movie website now there is a new section where you can learn more about each of each of the characters, and also some of the worlds the plot of The LEGO Movie will play out. They are revealed the same gradual way as The LEGO Movie sets (we talked about those here: Unveiling of The LEGO Movie Sets), so each time you go back to the website you will find new characters and worlds unlocked – I guess to keep up the excitement! 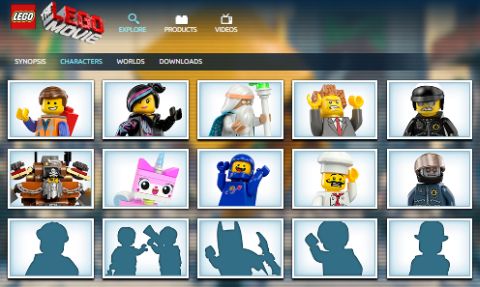 EMMET: An ordinary, rules-following, perfectly average LEGO minifigure who is mistakenly identified as the most extraordinary person and the key to saving the world. He is drafted into a fellowship of strangers on an epic quest to stop an evil tyrant, a journey for which Emmet is hopelessly and hilariously underprepared.

WYLDSTYLE: A free spirit who loves pushing boundaries and being creative. She has a strong, independent streak that makes her question when things are wrong. Since the believes Emmet is the “Special” from The Prophecy who’s destined to save Bricksburg, sparks have been flying between them, in spite of herself… and her current boyfriend.

VITRUVIUS: An ancient and heroic wizard who prophesizes that a “Special” will defeat Lord Business and become the greatest LEGO Master Builder of all. He tries to teach Emmet that the key to true building is to believe in yourself and follow your own set of instructions inside your head.

PRESIDENT BUSINESS: President Business, an uptight CEO who has a hard time balancing world domination with micro-managing his own life. He operates a successful business front that creates music, TV shows, surveillance systems, history books and voting machines, in addition to all dairy products and coffee. Secretly, he is Lord Business, the most evil of tyrants who oversees a robot militia and attempts to take over the LEGO universe.

GOOD COP/BAD COP: Lord Business’ #1 henchman, whose loyalty is tested when he is forced to turn on his own parents. As the story unfolds, it is apparent that there can be a Good Cop inside him as well.

METALBEARD: A fierce LEGO Master Builder with the head of a pirate and the body of a multi-purpose utility knife. He is bent on finally defeating Lord Business after failing badly the last time they tangled.

UNIKITTY: Hailing from CloudCuckooLand, the capital of rainbows and puppies, she is half unicorn, half anime kitten and one endless dance party. She is happy to join her fellow LEGO Master Builders in the quest to defeat Lord Business, but she also has a powerful secret.

BENNY: This ’70s era spaceman suffers from a cracked helmet and lack of oxygen. His first love will always be spaceships but he will do anything to help his fellow LEGO Master Builders.

CHEF GORDON ZOLA: The head chef of the ritziest restaurant in all of Bricksburg. His recipe book contains precise instructions for preparing everything from giant turkey legs to pizza pies, which is easy when everything is made of plastic and the ovens don’t turn on. Chef Gordon Zola secretly dreams of a day when he will be able to experiment which creating his own new and original dishes, but as long as President Business is in charge, he knows that he has to keep making everything according to the rules.

ROBOT SWAT: The Special Weapons and Tactics robots are the most elite units in President Business’ mechanical police force. They obediently follow Bad Cop’s orders in hunting down Master Builders, smashing their way into unlawful meeting places and locking up any fugitives they capture. They’re tough and logical, but they have absolutely no imagination, so they’re easy for a creative Master Builder to fool if there aren’t too many of them in one place.

BRICKSBURG: A humongous city built entirely out of LEGO bricks, and the home town of a completely ordinary, yet very special minifigure named Emmet. Under the all-controlling leadership of President Business, everything in Bricksburg is done exactly by the instructions, from waking up and getting dressed in the morning to smashing old buildings and assembling new ones down at the construction site.

WILD WEST: A rootin’, tootin’ world that’s like every cowboy movie ever all smashed together. Here in the rowdy Wild West, there are always thrilling horseback chases, exciting train robberies, and old-time piano music playing while sheriffs and outlaws have showdowns outside the local saloon. It’s not the safest place, but it’s a great spot to hide out if you don’t want to be found.

CLOUD CUCKOO LAND: A land up in the clouds where there are no rules, no limits, no bushy mustaches and no bedtimes. Reached by traveling up a rainbow and home to the sweet and plucky Princess Unikitty, CuckooLand is built from every kind of piece using every type of LEGO imagination. Unknown to most, it is also the secret meeting place of the Master Builders.

MELTING ROOM: Not much can hurt a minifigure… not much except the Melting Room! In this clandestine chamber, Bad Cop and his army of police robots use secret technology to try to melt the Piece of Resistance off of Emmet’s back, whether he wants them to or not. He’d better hope someone shows up to help him out in a hurry! 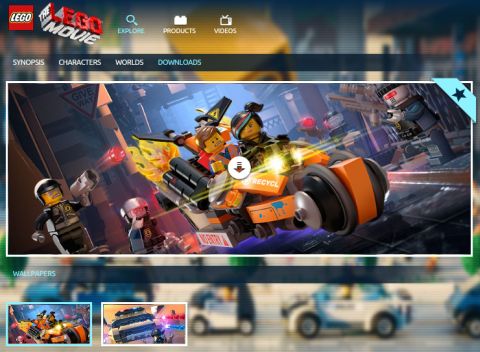 There is also a section where you can download wallpapers. Last time I checked there were only two, and one of them woudn’t download, but hopefully it will be fixed soon, and also more wallpapers will be added. 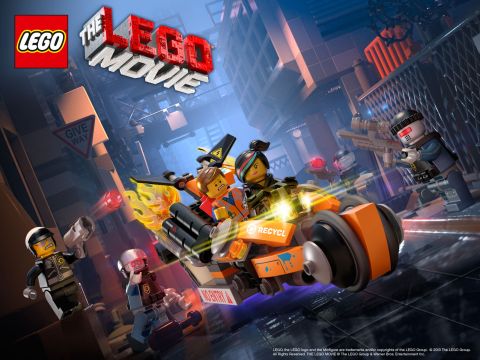 Then there is also a video section where you can watch all the previously released trailers, teasers, and even the best of The LEGO Movie contest entries from Rebrick! 😀

And below is the newest The LEGO Movie trailer. This trailer is an exclusive that has been launched by film service www.FindAnyFilm.com and forms part of the UK film, TV and video industries’ campaigns to showcase why great movie moments are worth paying for. Although some of the sections are the same as in the previous trailers, there are also some new, and pretty funny additions. Also, this trailer uncovers the behind-the-scenes craftsmanship that goes into making great movie moments and encourages viewers to choose official films. Enjoy!

So what do you think? How do you like The LEGO Movie story, characters and places so far? And how do you like the new trailer? Feel free to share and discuss in the comment section below! 😉