The Many Aspects of the LEGO Hobby…

by Thita (admin) on December 9, 2013
in Community Articles

I am a TFOL (Teen-Fan-of-LEGO) and I go by the name Strider in this community. In my first article I addressed a common phenomena in a LEGO fan’s life called the Dark Ages (see: When the LEGO Dark Ages Creeps Up On You…), and today I thought I will tackle a broader subject; a summary of the different aspects of LEGO, and what LEGO can mean to different people. I hope to cover enough so that everyone will be able to relate somewhat to what I am talking about, and maybe even start a nice discussion. 🙂 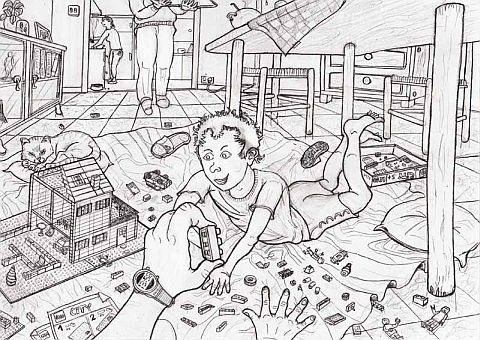 Let’s begin by saying that almost all LEGO fans started at an early age (illustration above by Albert Llort). Although there are some LEGO fans who got introduced to the hobby as a teen or an adult, the norm is starting out with LEGO as a childhood toy. Then, as you continue playing and building, you will likely discover the more complex functionality of LEGO as an artistic, architectural, and advanced model-building medium. It is not necessary for you to become an expert on all aspects of LEGO, however stretching your LEGO building skills can enhance and enrich your life in more than one way; understanding mechanics, programming, concepts of architecture and design, problem solving, team-building (when you work on larger project with others), etc. – plus it is a great hobby that can last a life-time, and also become a bonding experience between generations (photo by sammie619). 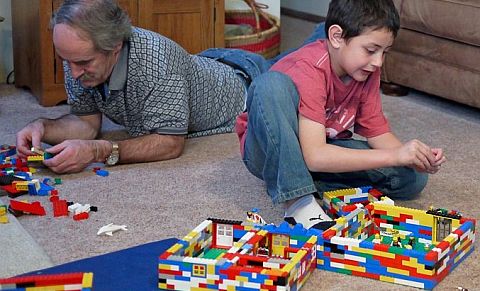 Even as a childhood toy LEGO can be used in different ways. Some younger kids get their parents to build a set for them, then they play around with it until it eventually falls apart and gets re-built again. Other kids enjoy the building process as well, and will spend endless hours perfecting their models in quiet play. My own first LEGO set was a LEGO Racers car; built with stylish LEGO Technic pieces and one of those big wind-up motors. The front of the vehicle was designed to pop up when you let it zoom into a wall, so needless to say it wasn’t long before my race-car started to break down. I was too young to put it back together correctly, and while I did make a few things out of the pieces, most of them are now completely lost. My second set was the LEGO Star Wars Anakin’s Jedi Starfighter that I built myself and then made lots of other things with it. Some people don’t dive into building their own stuff right away, while others have been making their creations from the very first LEGO set. However at this point for most people LEGO isn’t an art quite yet…

As you get older – and depending on what your starting point is – LEGO can become more to you. You might start planning more ambitious projects, or begin experimenting with more advanced techniques. You will probably notice that you have a tendency to build things in a certain way, and a preference for specific LEGO themes. For me it varies. If I’m just free-building for fun I’ll make whatever pops into my mind at that time. But in general I gain the most enjoyment from making multiple level houses with spacious floor-plans and then designing all the interior furnishings. I like making castles too, and any medieval structures. No matter what aspect of LEGO you like, by the time you reach your teens, you’ve probably advanced enough to feel like LEGO is not just a toy, but a creative medium with pretty much unlimited options.

From here your LEGO building skills will grow and grow – provided you stick with it. LEGO is such a fun hobby, it shouldn’t be too hard to continue, but if you do get stuck or loose inspiration, you can read my previous article on overcoming your Dark Ages. Below I will just run through a few examples of how LEGO fans continue to build and enjoy the hobby.

➡ LEGO MICRO-BUILDING – Micro-building with LEGO basically means building models that are smaller than minifigure-scale. It’s a great way to work on details and designs without using up hundreds of pieces that you might not even have. I find it particularly fun to build little robots using interesting LEGO pieces, then building other things in their scale. Also, LEGO minifigure leg-assemblies with the top connector part turned all the way down make cute things me and my brothers used to call “Robies”. LEGO coin pieces look like little heads with a hat (Toppy Guys to be specific – I know, it’s crazy), and of course Head Adventures – it’s basically a normal head. It can be quite surprising how LEGO pieces in different scales can signify different things! Another great (and very useful) use of micro-building is to make a smaller model to serve as a blueprint for a large LEGO project. (Below is a LEGO micro fishing-village by True Dimensions) 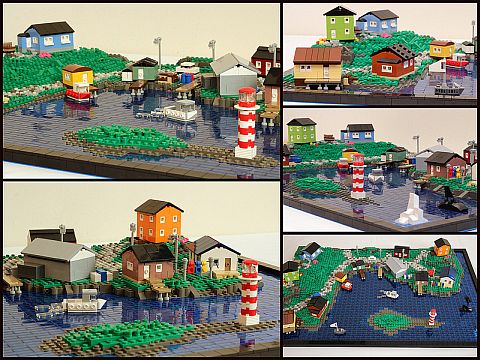 ➡ BUILDING USEFUL OBJECTS FROM LEGO – It can be fun to make useful things out of LEGO bricks; pencil-holders, picture-frames, storage-boxes, book-ends… the list is unlimited! The nice things is that you can customize them in any way you want. Also, you can use LEGO to fit with other toys and hobbies. 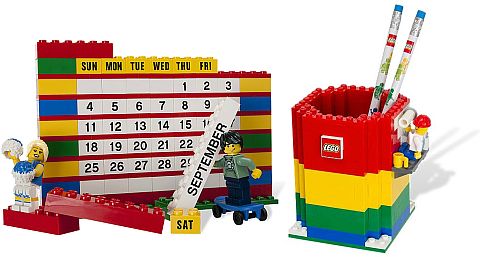 ➡ BUILDING WITH LEGO TECHNIC – While in more recent times LEGO Technic system elements are being integrated more seamlessly into standard LEGO themes like LEGO Ninjago and LEGO Legends of Chima, the LEGO Technic line is still a whole separate and unique building-system in itself for creating advanced mechanical models and functional vehicles. LEGO describes Technic as “the perfect gift for advanced builders,” and many LEGO fans build exclusively with the LEGO Technic system. 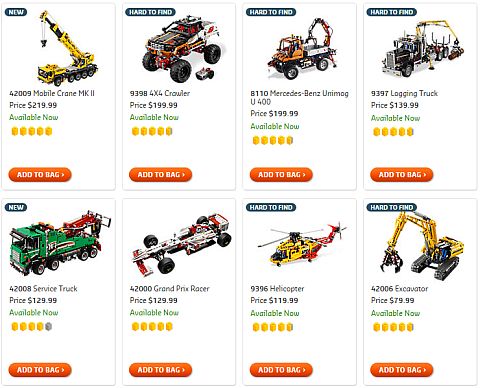 ➡ BUILDING LEGO MINILAND-SCALE MODELS – These are very large LEGO models, built for very unique brick-built LEGO figures, originally developed for LEGOLAND parks. While MINILAND still suggests something small, the figures, and everything built for them, are significantly larger than standard minifigure scale; buildings, cars, boats… everything… becomes at least five times bigger when you’re building for MINILAND people. It’s a fun challenge to build in this scale, but it also quickly exhausts your LEGO brick collection. On the upside, some LEGO minifigure accessories that when taken in perspective are way too huge for normal minifigs (like the paintbrush) fit better with MINILAND people. And MINILAND people are interesting builds in themselves; a LEGO cape can be used as a skirt and cheese-slopes as hair, for example. (Below is a LEGO MINILAND build – photo by stecki)

➡ LARGE LEGO DIORAMAS – Many LEGO fans build huge displays, depicting LEGO cities and scenes from various historic time-periods, as well as fantasy worlds. These LEGO creations are often the result of a group effort, where each member builds a smaller section of the diorama that they assemble for LEGO conventions and other events. And some LEGO fans have massive collections that they can use to build large dioramas themselves. But even if you don’t have thousands of LEGO bricks, it can be fun to design and build something like a LEGO city or village, and work on it bit by bit as your time and money allows. Oftentimes I’m just building a small thing for fun, which eventually becomes part of a 32×64 stud scene. (Photo by beckie) 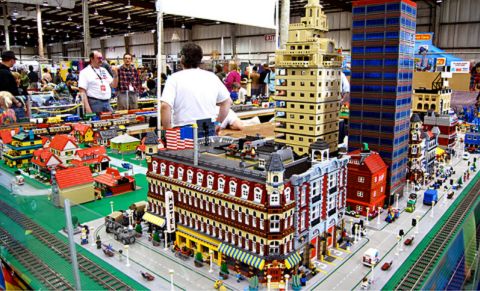 ➡ BUILDING LEGO SPACESHIPS – LEGO has a long history with space themes. In fact LEGO Space has been one of the longest standing LEGO line of products, even before the collaboration with the Star Wars franchise. Just working on and expanding the official LEGO Space or LEGO Star Wars sets is a fun hobby in itself, and of course designing and building your own space adventures from LEGO is also very rewarding. Some people even build incredibly large and detailed spaceships of their own design – the size of moving cities inside a sleek spaceship body. (LEGO spaceship by Disco86) 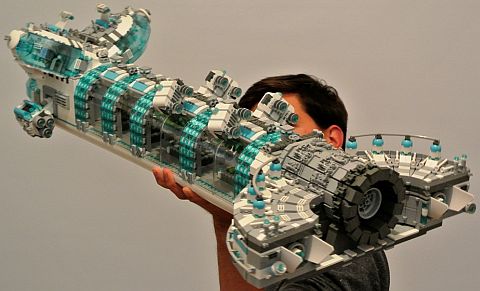 ➡ BUILDING LEGO SHIPS – Boats, military ships, pirate ships, cruise-ships… there is such a great variety of both size and shape! LEGO also released many ships throughout the years that you can use as a starting point for your own ship-building. LEGO even made specialized boat-hull pieces that can work as a foundation for many different kinds of ships, but for very large ships you will also have to build the hull. Ship-building from LEGO is not easy due to all the curves and angles, but nevertheless there are many fantastic ones built by the LEGO fan community. If you want a good challenge, you might want to try LEGO ship building! 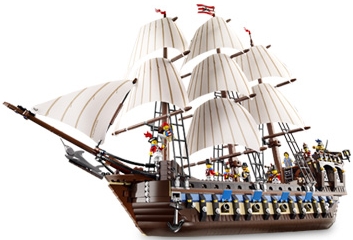 ➡ BUILDING LEGO HOUSES – The heart of LEGO is the original brick, and bricks make houses. Be it a Victorian-era manor or a modern home, the neat thing about houses is that they are so customizable both on the outside and on the inside. You get plenty of chances for many fun builds; a ping-pong table in the den, a bunk-bed in a upper level, or a fully equipped kitchen. Perhaps one of the most fulfilling aspect of building LEGO houses is that you are designing the character, the life and the home of LEGO minifigures. (Below is a LEGO doll-house by Heather Braaten.) 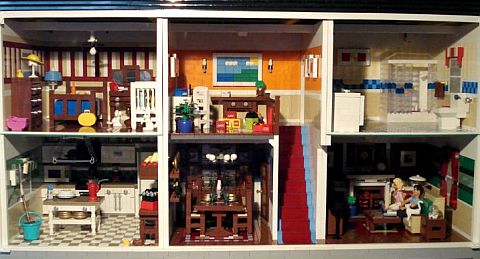 ➡ BUILDING LEGO MOSAICS – We have talked about LEGO mosaics many times here, but basically LEGO mosaics are two dimensional pictures taking advantage of LEGO’s pixel-like elements and many shades of color. For creating complex images some people use photo-editing software to make the pixels the correct size as a template for the LEGO mosaic. A neat technique is to place clear LEGO tiles or plates on top of the LEGO mosaic, smoothing out the overall appearance. You can read more at the LEGO Mosaics section. (Below is a LEGO mosaic by Janey Gunning.)

I know there are a areas of the LEGO hobby that I haven’t covered but what I wanted to achieve was to give a fairly comprehensive summary of all the different things people use LEGO for. Be it an intellectual experience, a fun way to relax, or a way to express yourself creatively, LEGO is one of the best and most popular building-toys.

Thank you for reading, and remember your thoughts here are always appreciated, so feel free to share in the comment section below. What is your favorite aspect of the LEGO hobby? Do you think LEGO is going to be a lifetime passion for you? What are your goals with LEGO? What projects do you have planned for the future? Let’s discuss! 🙂