The latest in the LEGO Architecture line has been the #21019 LEGO Architecture Eiffel Tower. I’m actually quite surprised that this iconic landmark wasn’t released earlier in the series. So let’s take a closer look. 🙂 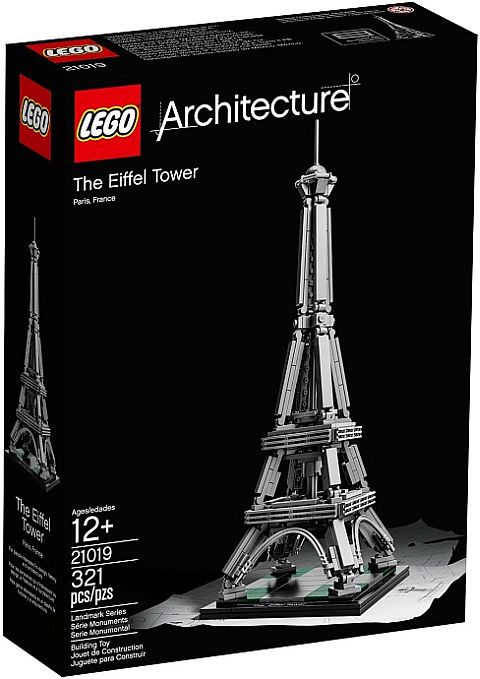 Here is the official description of the #21019 LEGO Architecture Eiffel Tower: Presenting the LEGO Architecture interpretation of one of the most iconic landmarks ever constructed – The Eiffel Tower! Designed and built by French entrepreneur, Gustave Eiffel, the original 324-meter-tall masterpiece of wrought iron engineering formed the grand entrance to the 1889 World’s Fair, held in Paris to celebrate the 100th anniversary of the French Revolution. 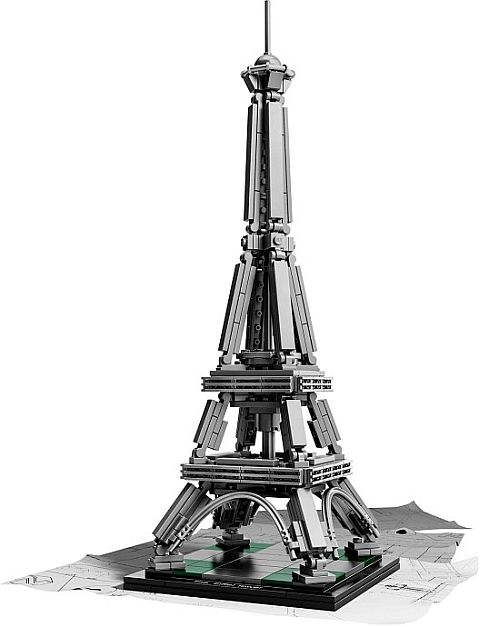 During construction, the 18,038 wrought iron elements making up the tower’s lattice structure were bolted together at Eiffel’s factory on the outskirts of Paris, before being transported to the site, hoisted into place by steam-powered cranes operating from the elevator shafts, and assembled using no less than 2.5 million individual rivets. The resulting structure was extremely rigid and over the years has withstood storms, floods and everything else mother nature has thrown at it. 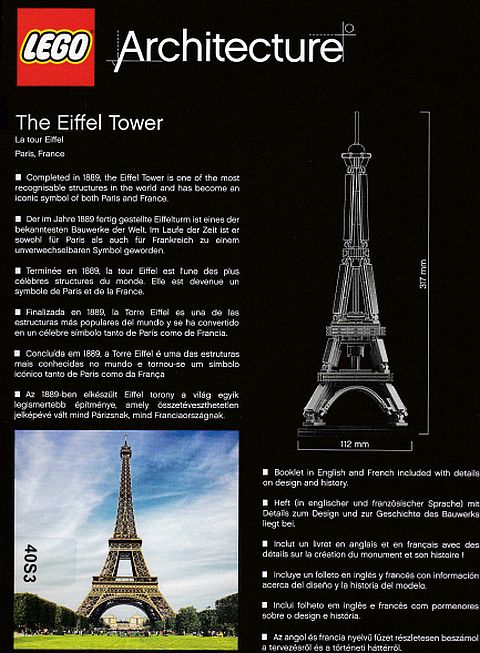 Today, The Eiffel Tower is one of the world’s most popular landmarks, attracting millions of curious visitors from around the world each year. With this exceptional model, you can now build your very own 321-piece Eiffel Tower in LEGO brick form and display it in your home, office or wherever you like! Booklet included with details on design, architecture and history of the tower (English and French languages only. Other languages available for download). Measures over 12” (31cm) high, 4” (11cm) wide and 4” (11cm) deep. Recommended for ages 12+. Price: $34.99 – BUY HERE

The design of the LEGO Architecture Eiffel Tower is well done – especially in such a small scale. The arches at the bottom are beautiful, and the grilled 8×8 plate on the first level is just perfect. One thing I don’t like as much is that the hoses used for the arches, the 1×2 grilled tiles on the sides, and the round bar-frame on top are flat-silver, whereas the rest of the model is mostly light-gray, with some dark-gray added. I think it would have been better to have the entire model in one shade of gray or even flat-silver. Although it is interesting to note that the Eiffel Tower was never painted gray; it was originally red, and since then has changed colors several times (it is re-painted every 6-7 years), transitioning between reddish, brownish, yellowish colors, and most recently bronze (photo by Bret Arnett). 🙄 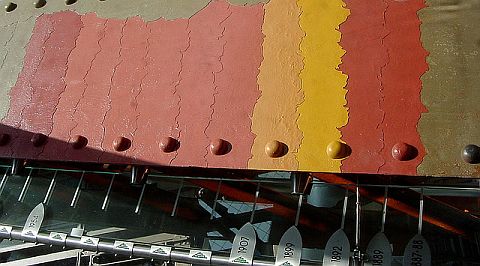 The box of LEGO Architecture sets are always sleek and sturdy. I’m a bit surprised about the orientation of the instruction booklet though. As Jason mentioned in the review video posted above, it is really hard to keep it open. In most of the other LEGO Architecture sets the booklet is in landscape-mode (with the longer side at the bottom), and are much easier to handle. Why LEGO designers went with portrait-mode this time I’m really not sure. It shouldn’t have been that hard to orient it the other way. Otherwise the booklet is very high quality, with thick, glossy paper meant for collectors, as in all LEGO Architecture sets. 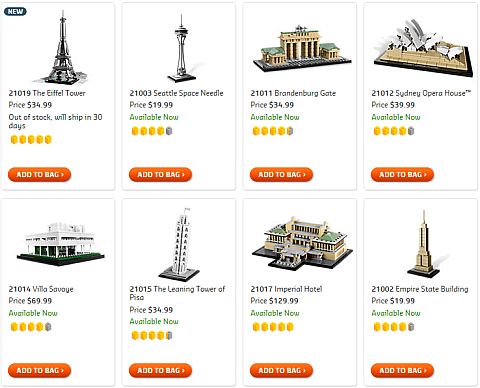 What do you think? How do you like the LEGO Eiffel Tower model? Do you collect the LEGO Architecture sets? Which one is your favorite? Feel free to share and discuss in the comment section below! 😉