LEGO Mixels is tied in with a TV show on Cartoon Network. From what I have seen so far they are aimed at very young kids, for everyone else it seems like watching the show is a good way to seriously damage some brain-cells. Which is surprising as the sets are made up of very small parts that are normally not recommended for young children, so I’m not sure who the target audience is for the TV show. 😕

Fortunately the LEGO Mixels sets themselves are very fun. They are made up of lots of very useful small parts in interesting colors. The characters are also highly collectable with pocket-money. Also, they are great little sets to keep on your desk and doodle with when you have a few minutes – a great way to improve your building skills! LEGO Mixels includes a good number of the new small ball-joints that LEGO fans area already very excited about. 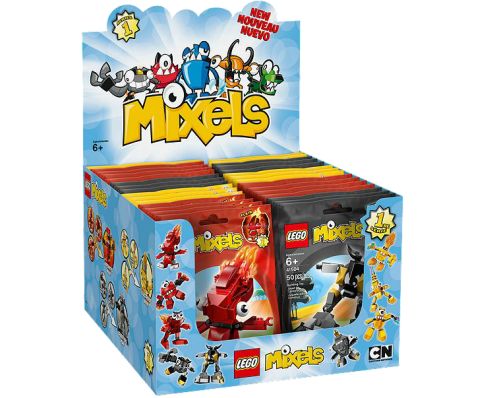 LEGO Mixels are funny, creative creatures made up of the basic building blocks of LEGO matter: Fire, Rock, Electricity and more. The Mixels live in tribes spread across a vast world and love to mix and combine. By using the special cubits they will be able to mix into new characters with hilarious and surprising results. Nixels are swarming, colorless creatures of deconstruction. Nixels tear apart everything in their path – including the mixed up Mixels. In the first wave of LEGO Mixels we get three tribes, and we will get more later in the year. Below is a bit more info about them, and you can read more at the LEGO Mixels website.

➡ LEGO MIXELS – INFERNITES: The Infernites have their home in the magma wastelands near the center of the earth, a place full of molten lava, rivers of fire, and lots of lovely smoke. So far, nobody else has dared to travel into this molten homeland. In fact, just thinking about it might cause third degree burns! Characters are: FLAIN, VULK and ZORCH.

➡ LEGO MIXELS – CRAGSTERS: The industrious Cragsters are a tribe of miners who live in the many tunnels and caverns they have dug under the surface of the world. They smash, they dig, they are great to have around. Unless, of course, you have lots of fine china! Characters are: CRADER, SEISMO and SHUFF.

➡ LEGO MIXELS – ELECTROIDS: The Electroids live in towers high up in the mountains to stay as close as possible to the lightning storms that energize them (and make them kind of crazy at the same time). Characters are: TESLO, ZAPTOR and VOLECTRO.

➡ LEGO MIXELS – NIXELS: Nixels are annoying and destructive little creatures who are spread all over the land of the Mixels. They live to tear down and break apart the world around them, including any cool combinations that the Mixels create. In fact, there is nothing the Nixels hate more than when two or three Mixels combine together and get super powers. So the Nixels have made it their mission in life to put and end to such crazy creativity all together. And the only way to do this is to hide and destroy the cubits which enable the Mixels to combine in the first place. One Nixel can do little harm. But when they swarm together they can break apart a Mixel in seconds. So now you’re warned! My understanding is that a Nixel is included in every Mixels set. Maybe someone who has them already can confirm this?

If you would like to pick up the LEGO Mixels characters they are available at the Online LEGO Shop. Other 2014 sets that have become available today are LEGO Star Wars and LEGO Legends of Chima, but we will talk about those separately. SHOP FOR LEGO MIXELS HERE

What do you think? Are you planning to collect the LEGO Mixels characters? Do you have a favorite tribe? Feel free to share and discuss in the comment section below! 😉