So I think we have waited long enough to freely talk about The LEGO Movie; everyone who wanted to see it should have seen it already by now… at least once… however if you did not see the movie yet, and you don’t want spoilers, please stop reading now! Watch the movie first, then come back to discuss it. Again, this is the LAST WARNING and SPOILER ALERT! 😮

You probably heard by now that The LEGO Movie was extremely well received. As of this writing it has grossed well over $234,000,000 worldwide, and in North America it was the number one film in both its first and second weekend. The LEGO Movie has received overwhelming critical acclaim with nearly unanimous positive reviews. It has a 96% fresh rating on Rotten Tomatoes. The website’s consensus reads, “Boasting beautiful animation, a charming voice cast, laugh-a-minute gags, and a surprisingly thoughtful story, The LEGO Movie is colorful fun for all ages.” Similar high ratings are also the consensus on other ranking websites and polls.

The LEGO Movie obviously touched adults and children alike, and not just hard-core LEGO fans. In fact I know of numerous people who got back into the hobby (or started out) because of The LEGO Movie. And almost everyone ends up going to a LEGO retailer straight after watching the movie to pick up a set or two to build! The LEGO Movie was able to achieve something very challenging; appeal to both adults and children, and deliver a story with little plastic guys and gals that speaks to the heart. 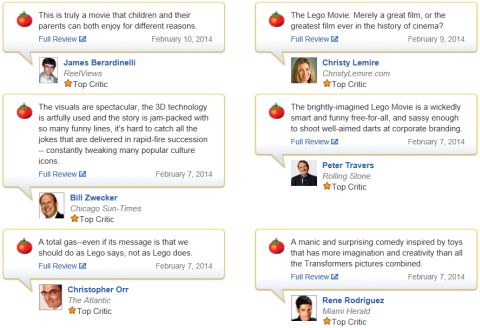 I’m not going to repeat what other people thought of the movie (you can read the reviews on Rotten Tomatoes linked above and also on other LEGO fan-sites and forums), however I was interested to know what our community thinks. I will go first and share my opinion, then it will be your turn to share yours. Sounds good? 🙂

➡ THINGS I LIKED ABOUT THE LEGO MOVIE:

All of the main characters were likable, believable, well-developed and well-rounded. With so many characters this is actually a great accomplishment in itself. Most movies (especially cartoons) would have a few main characters and from those maybe one or two are really developed. In The LEGO Movie there is Emmet, Wyldstyle, Vitruvius, Batman, Benny, Unikitty, Bad-Cop and Lord Business as the main characters and none of them feel bland or shallow. Emmet is a genuinely likable ordinary guy, Batman with his deadpan humor is really funny, Wyldstyle is one courageous heroine with some mad LEGO building skills, Vitruvius’ smooth voice is to die for, Benny… I’m in love with Benny and that’s all I will say about that, Bad-Cop/Good-Cop is quite a complex character with lots of internal conflict, Lord Business is just the perfect badguy with the right amount of evilness, and Unikitty… I’m still wondering about her… sweet and disturbing at the same time. 😈

The movie is full of Easter-eggs for long-time LEGO fans. Benny’s cracked helmet, references to all-time favorite LEGO themes and characters, the controversy of gluing LEGO, the LEGO man-cave of Finn’s dad with all the “do not touch” signs, sorting cabinets, display shelves, and more!

There are also Easter-eggs that children can relate to; drawing faces on minifigs with markers, using non-LEGO toys and other items to enhance the play experience, mixing yellow and flesh-colored minifigs together, building crazy rainbow colored contraptions, etc. (The following favorite character poll is from The LEGO Movie website.)

I found the ending of The LEGO Movie very touching. By bringing the story to the real world the movie felt all the more authentic and complete. Reminded me of Toy Story – another very touching movie about toys. And of course we already know there is going to be a sequel to The LEGO Movie, scheduled for May of 2017, so the story – in both dimensions, I assume – will continue! 😀

The fact that the minifig movement was kept realistically restricted was a brilliant idea. It made the characters all the more likable. I also appreciated all the other realism; like the all-LEGO backgrounds and scenes, the cracked and worn LEGO pieces, and in general only using pieces that appears in actual LEGO sets.

The whole LEGO city of Bricksburg, as well as the other realms were fantastically detailed! And I guess this is a good time to switch over to some of the things I didn’t like, because it is related to this last point…

As I have mentioned above the scenes for the movie were beautifully created, however we had very little time to enjoy them. Most of them flashed by so fast there was no time to take in all the intricate details. This is especially disappointing in regards to The LEGO Movie sets. They hardly got any airtime in the film. In fact most people have missed them all-together. The fact is that the ice-cream truck, plumber-van, fire-truck, etc. were all there in both their normal and converted forms, but if you blinked you missed them. The movie was only an hour-and-a-half long. They could have easily added another 20-30 minutes and slow some of the scenes down so viewers could actually enjoy them. Interestingly, the movie did slow down towards the end when it entered the real world. Maybe all that speed was just in Finn’s mind… kids… you never know what they are thinking about. 🙄

My second complaint is also about the unnecessary speed of the movie. There was so many funny jokes and references, but it was hard to fully enjoy them and let them sink in because by the time it landed the movie was already somewhere else. On the plus side the speed kept kids really quiet. I was worried that the movie-theatre will be full of little kids, and even though it was, I didn’t hear a squeak from them – they were fully absorbed!

My third complain has to do with the trailers and teasers that came out before the movie. There were too many of them with exact scenes from the movie. I’m one of those people who couldn’t wait to see the film, so I watched every one of those shorts, and they spoiled about half of the jokes and scenes for me because I have already seen them. They should have kept advertising to the two main trailers and maybe some bloopers and behind-the-scenes shots, instead of showing direct scenes from the movie.

All in all I really enjoyed the movie and I will be first in line to get the DVD. Plus I already have all of The LEGO Movie sets and I can’t wait for the summer sets to get released! I think I will stop here though and let you share your thoughts, as I’m really curious of what you think. Also, maybe we should start a list of Easter-eggs we found in the movie! If you remember some you are welcome to list them in the comment section below! 😉

And you might also like to check out The LEGO Movie section for more news, reviews and discussions, or select from the following recent posts: