The Simpsons meet The LEGO Movie…

Here is a fun little video created by LEGO-fan Marc-André Caron (MonsieurCaron on YouTube) that got more than 13 000 hits in the first 24 hours it was published on YouTube, and now has over 63,000 likes. 🙂

This LEGO brickfilm is a recreation of the iconic intro-scene from The Simpsons TV show; first with The LEGO Simpsons characters, then with The LEGO Movie characters, and finally they all end up watching TV together on the double-decker couch as buddies.

The Simpsons Meet The LEGO Movie was made using LEGO stop-motion techniques, and only include LEGO elements and minifigures. It was shot with a Canon Rebel T3 using DragonFrame on a MacBook Pro 15″ and put together with Adobe Premiere Pro, After Effects and GarageBand. 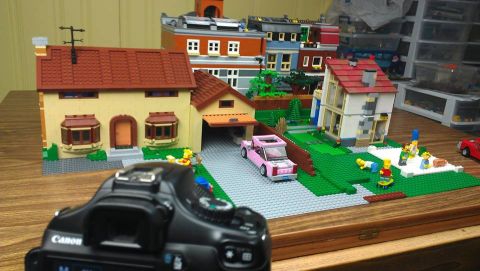 The LEGO sets used in this LEGO stop-motion video are as follows (links will take you to the Online LEGO Shop if you want to check them out): #71006 LEGO The Simpsons House, #70803 The LEGO Movie Cloud Cuckoo Palace, #70808 The LEGO Movie Super Cycle Chase, #70809 The LEGO Movie Lord Business’ Evil Lair, and Emmet’s Car – which was a Toys’R’Us promotional giveaway… plus lots of other LEGO bricks!

What do you think? How did you like this LEGO stop-motion video with The Simpsons and The LEGO Movie characters? What was your favorite part? Feel free to share and discuss in the comment section below! 😉