Although we have seen the 2014 LEGO summer sets through the various toy fair reports earlier this year (see links at the end of this post), many official set pictures were just posted a few days ago on Amazon, and I think they are worth discussing. Today we will look at the 2014 LEGO Star Wars summer sets. Enjoy! 🙂

➡ #75048 LEGO Star Wars The Phantom – Join the Rebel resistance against the evil Empire in The Phantom attack shuttle, as seen in the exciting Star Wars animated TV series ‘Rebels’! Place young rebel hero Ezra Bridger in the detachable cockpit and store his helmet and blaster in the cargo. Fly the Phantom into battle against the evil Empire! Includes 2 minifigures: Ezra Bridger and C1-10P. 234 pieces. Price: $24.99 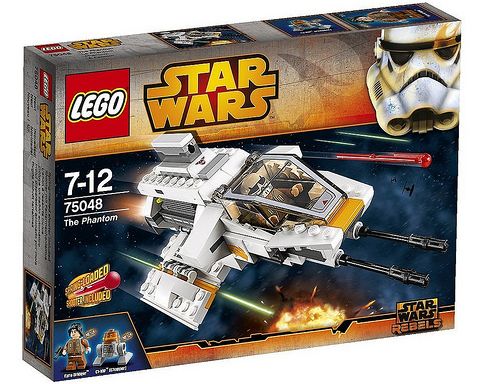 ➡ #75049 LEGO Star Wars Snowspeeder – Lead Rogue Squadron with Luke Skywalker in the streamlined Snowspeeder! Place him and gunner Dak Ralter in the dual cockpit with their weapons and attack with the spring-loaded shooters hidden under each wing. Target the Imperial Snowtrooper with the rear stud blaster or convert it to fire the harpoon hook and take down the 75054 AT-AT (sold separately). Then take the action to the ground with the tripod gun. Recreate the classic Battle of Hoth from Star Wars: Episode V The Empire Strikes Back! Includes 3 minifigures with assorted weapons: Luke Skywalker, Dak Ralter and a Snowtrooper. 278 pieces. Price: $29.99 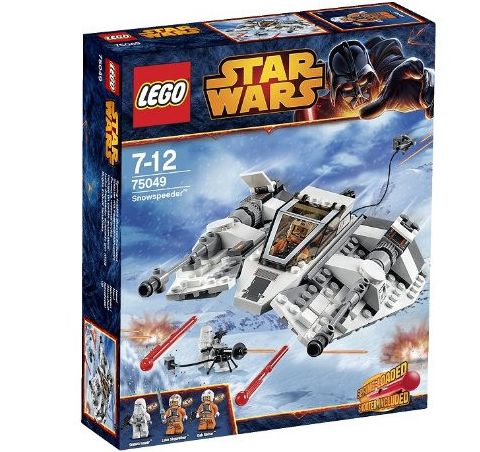 ➡ #75050 LEGO Star Wars B-Wing – Play out epic scenes from Star Wars: Episode VI Return of the Jedi and other thrilling space battles with the B-wing! Rotate the cockpit so the pilot always has a clear view ahead. Rev up the 4 huge engines to power through the galaxy and fire the spring-loaded shooters to repel Imperial attacks. Adjust the wings from the iconic cross shape for flight or landing mode. Includes 3 minifigures with assorted weapons and an accessory: Ten Numb, Gray Squadron Pilot and General Airen Cracken. 448 pieces. Price: 49.99 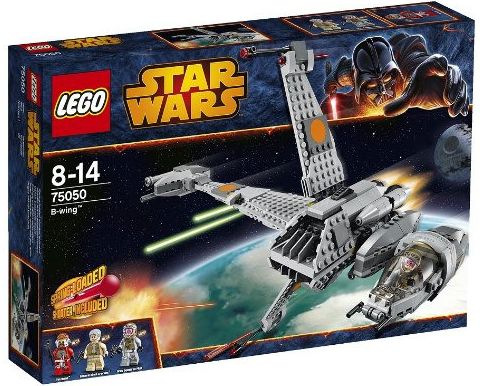 ➡ #75051 LEGO Star Wars Jedi Scout Fighter – Protect the vital Holocrons from the dark side with Jek-14 and his streamlined Jedi Scout Fighter. Lift the rear hatch to stash the containers of Holocrons and lightsabers. Place clone trooper Jek-14 and his co-pilot in the dual cockpit that opens two ways, with the Astromech Droid positioned behind. Unleash its awesome armory, including 2 spring-loaded shooters and an elevating and rotating cannon at the rear. Recreate thrilling scenes from LEGO Star Wars: The Yoda Chronicles animated specials. And if the action gets too hot to handle, detach the cockpit to turn it into an escape pod, but guard those Holocrons with your life! Includes 2 minifigures with assorted weapons: Jek-14 and Ithorian Jedi Master, plus an Astromech Droid and RA-7 Protocol Droid. 490 pieces. Price: $59.99 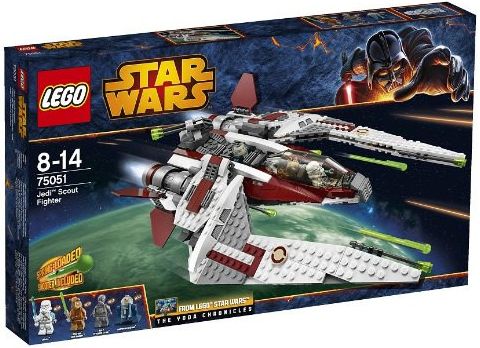 ➡ #75052 LEGO Star Wars Mos Eisley Cantina – Welcome to the noisy and dangerous Mos Eisley Cantina on the desert world of Tatooine! Park the landspeeder and enter, staying clear of the giant dewback drinking from the trough outside. Make sure Luke, Han and Obi-Wan have their weapons with them as they enter through the sliding door and walk past the droid scanner. Open out the building for easier play and order a drink while the Bith cantina band gets ready to play their instruments. Recreate scenes in the cantina from Star Wars: Episode IV A New Hope, such as the showdown between Han Solo and Rodian bounty hunter Greedo. Includes 8 minifigures with assorted weapons and accessories: Han Solo, Luke Skywalker, Obi-Wan Kenobi, Greedo, a Sandtrooper and 3 Bith Musicians. 615 pieces. Price: $69.99 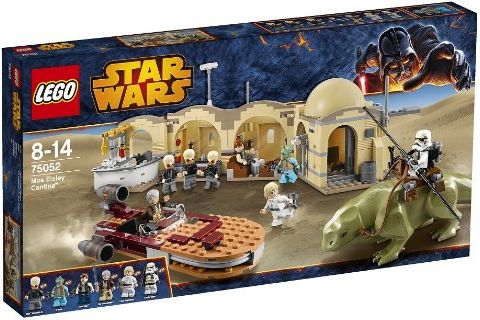 ➡ #75053 LEGO Star Wars The Ghost – Get ready to battle the Empire with the Rebel heroes’ awesome starship, The Ghost – as seen in the thrilling Star Wars animated TV series,  Rebels! Stay on course with Rebel minifigures in the two cockpits and put Zeb on patrol in the 360-degree rotating turret. Join the Rebel heroes aboard The Ghost! Includes 4 minifigures: Kanan Jarrus, Hera Syndulla, Zeb Orretios, and a Stormtrooper. 929 pieces. Price: $89.99 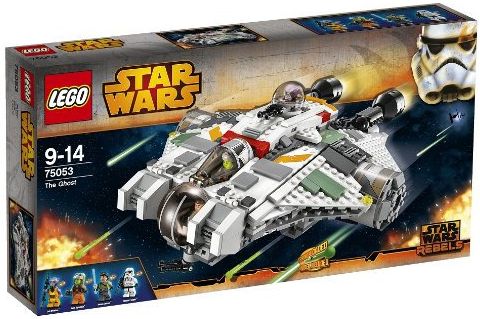 ➡ #75054 LEGO Star Wars AT-AT – Who can stop the Empire’s intimidating AT-AT – All Terrain Armored Transport – walker? Seat the AT-AT Driver and a Snowtrooper in the cockpit of this mighty war machine and move the head to aim the spring-loaded shooters. Pose the legs, trigger the trap door in the body and open up the side hatches for enhanced playability. Collect the 75049 Snowspeeder (sold separately) to play out the classic Battle of Hoth scene from Star Wars: Episode V The Empire Strikes Back! Includes 5 minifigures with assorted weapons and an accessory: AT-AT Driver, General Veers, Snowtrooper Commander and 2 Snowtroopers. 1138 pieces. Price: 109.99 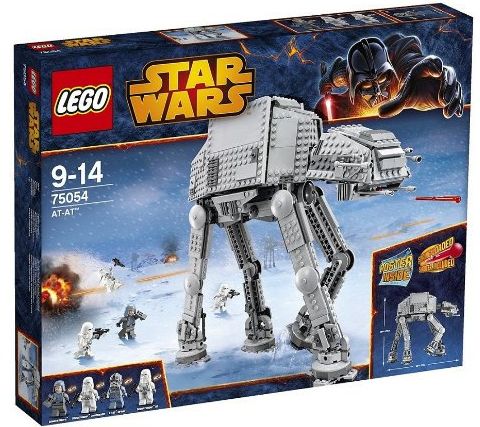 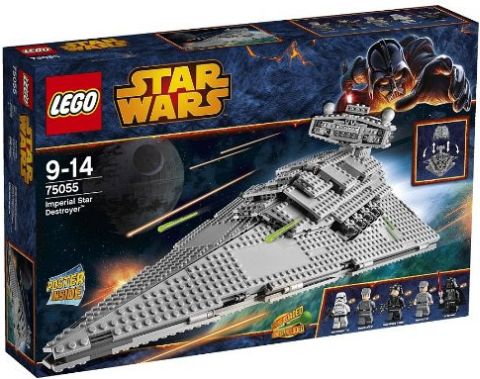 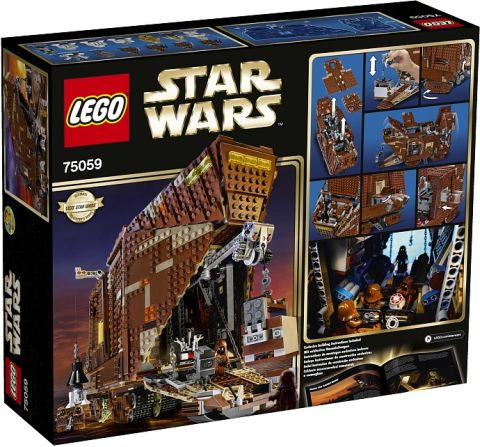 So what do you think? How do you like the 2014 LEGO Star Wars sets? And how about the minifigures? Feel free to share in the comment section below! You can also browse the currently available LEGO Star Wars sets at the Online LEGO Shop. 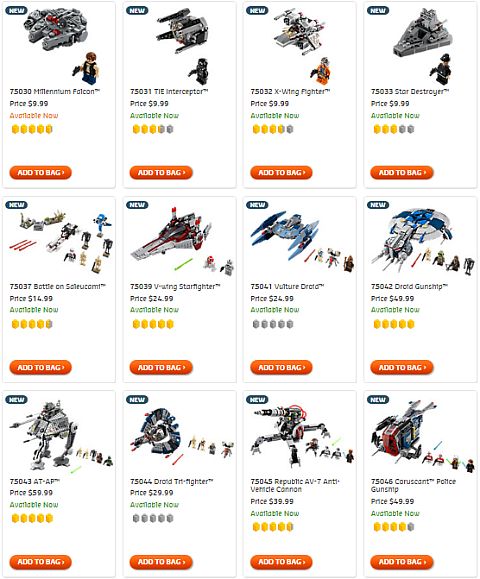