I forgot to mention at the beginning of the month that the 2014 LEGO Teenage Mutant Ninja Turtles sets are now available at the Online LEGO Shop. The sets were highly anticipated by LEGO TMNT fans and we have talked about them before, but now that we have better pictures and the sets are in stores it is a good time for an update. 🙂

There are five new sets in the LEGO Teenage Mutant Ninja Turtles line based on the animated series, and there will be three more sets released later this year, related to the upcoming TMNT movie. You can see the five new sets below with description and details, and I will also show you two of the three sets based on the movie. 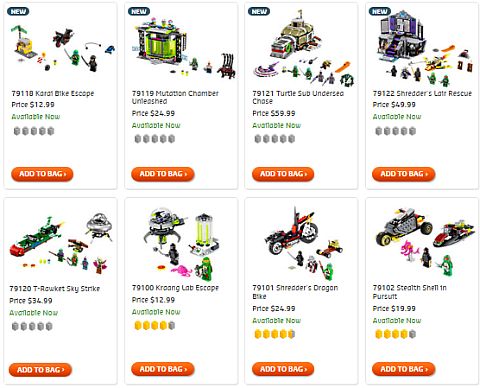 ➡ #79118 LEGO TMNT KARAI BIKE ESCAPE – Hang on tight and recover the mutagen! Karai has grabbed one of the lost mutagen canisters and is trying to escape on her super-cool motorbike. Attach a rope to the back of the bike with Leonardo and take a thrill-packed skateboard ride through the city streets. Hang on tight as Karai accelerates on the dual-exhaust motorbike and swerves past the roadwork sign. Lasso the rope around the street sign to make the vending machine explode and Karai crash to retrieve that mutagen! Includes 2 minifigures with weapons and accessories: Karai and Leonardo. 88 pieces. PRICE: $12.99 – BUY HERE

➡ #79119 LEGO TMNT MUTATION CHAMBER UNLEASHED – Unleash the mutated Spider Bytez against the Turtles! Uh-oh, it’s Turtle trouble! Raphael has infiltrated the Kraang’s lab and discovered the Mutation Chamber which can turn humans into mutant creatures. Climb the ladder with Victor, spin the electrodes and knock him into the mutation tank. Turn the knob to activate the mutation. When the transformation is complete, open the doors and unleash the fearsome Spider Bytez. Help Raphael to outwit the giant creature and escape before it grabs him with the huge claws on its head. Includes 2 minifigures with weapons and accessories: Victor and Raphael, and a Spider Bytez figure. 196 pieces. PRICE: $24.99 – BUY HERE 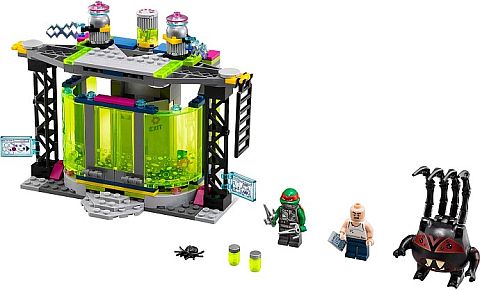 ➡ #79120 LEGO TMNT T-RAWKET SKY STRIKE – Launch a Turtle-powered Sky Strike with the T-Rawket! Green alert! The Kraang Ship is dropping mutagen bombs all over the city. Take to the skies with Donatello and Michelangelo in the Turtles’ homemade T-Rawket. Dodge the Ship’s flick missiles and return fire with a sizzling slice of Turtle Power from the pizza shooter. April’s dad has been transformed into Mutated Dr. O’Neil, so strap on the backpack glider, activate the ejector seat and launch a Turtle into the air to save him! Includes 4 minifigures with weapons and accessories: Donatello, Michelangelo, Mutated Dr. O’Neil and The Kraang. 286 pieces. PRICE: $34.99 – BUY HERE 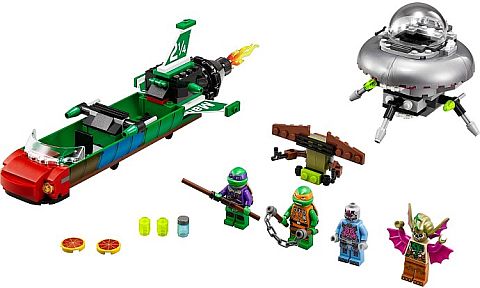 ➡ #79121 LEGO TMNT TURTLE SUB UNDERSEA CHASE – Lead an underwater pursuit of The Kraang! The Kraang have got the power cell and are getting away in their mini Kraang sub. Rev up the engine of the awesome Turtle Sub and power away in hot pursuit with Donatello, Leonardo and Leatherhead. Watch out for the Kraang sub’s flick missiles, fire the shooter and detach the mini sub to ambush the shark droids’ underwater vehicle. Select a weapon from the armory and dive into the water for a thrilling Ninja Turtle vs. The Kraang underwater conflict! Includes 4 minifigures with weapons and accessories: Donatello Leonardo, 2 Kraang, plus a Leatherhead figure. 684 pieces. PRICE: $54.99 – BUY HERE 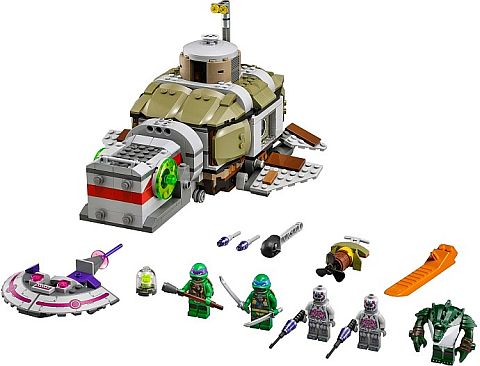 ➡ #79122 LEGO TMNT SHREDDER’S LAIR RESQUE – Rescue Michelangelo from Shredder’s Lair! Shredder has captured Michelangelo in the dungeon of his Lair. Glide to the rescue with Raphael in the cool flying Turtle vehicle. Fly through the windows into the Lair, but stay alert at all times because traps are everywhere. Watch out for the collapsing stairs and the hidden saw blade shooter underneath. Beware of the fearsome four-armed Robo Foot Ninja launching an attack from the flipper. Use the grapple hook of the flying Turtle machine to pull away the dungeon door and free Michelangelo. Turn the Turtle Power on the Foot Soldier to get to Shredder before he transforms his throne into an escape pod and flies out of there! Includes 5 minifigures with weapons: Michelangelo, Raphael, Shredder, Foot Soldier and a Robo Foot Ninja. 478 pieces. PRICE: 49.99 – BUY HERE 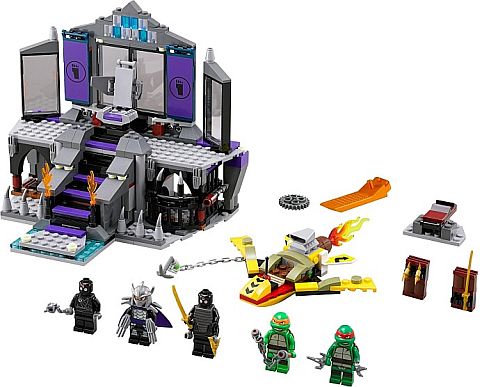 As I have mentioned there are also three LEGO Teenage Mutant Ninja Turtles sets that are based on the movie and will be released later this year. 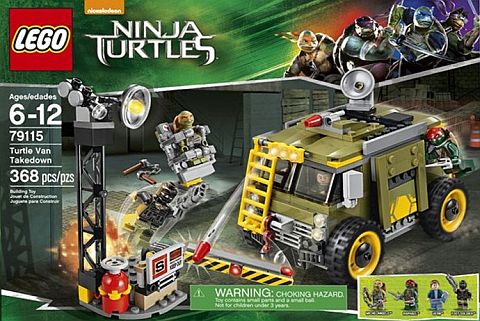 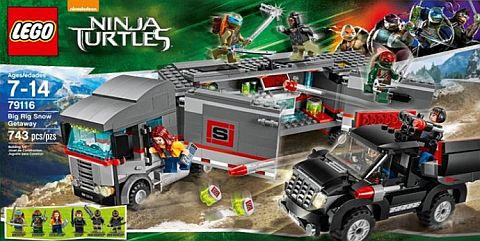 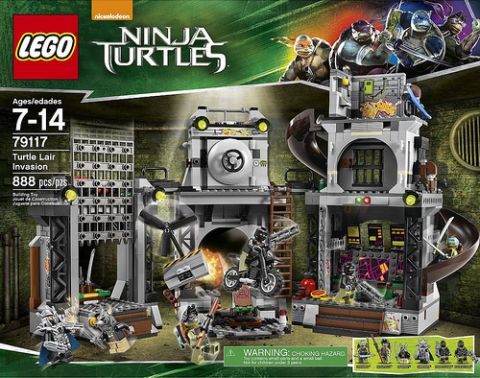 Also, LEGO posted this funny picture as an April Fools’ Day joke on their Facebook Page: “ONE DAY ONLY!  All orders placed today will be delivered via REAL turtle.  Shipping times may vary…” 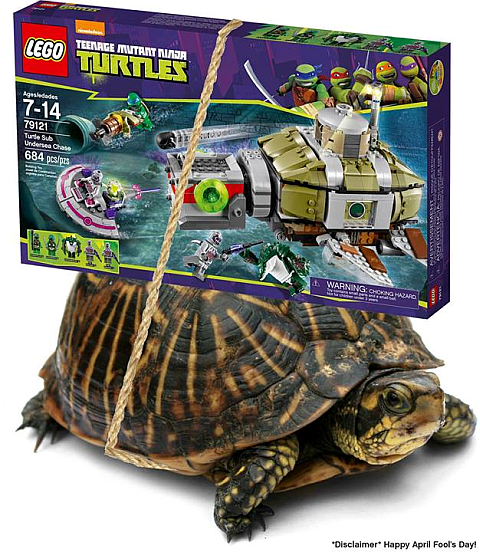 So what do you think? How do you like the 2014 LEGO Teenage Mutant Ninja Turtles sets? Are they as you expected them? Better? Worse? Feel free to share and discuss in the comment section below! 🙂