One of the nicest recent LEGO train sets is the #7939 LEGO City Cargo Train. It was first released in 2010, it is motorized and includes a full set of train-tracks, plus a bunch of other extra stuff. The normal price is $180, and it is totally worth it. Please note that this set is soon going to be retired and replaced by the new #60052 LEGO City Cargo Train (video below) with similar features and another nice train, but for $20 more. To get rid of their old stock Amazon is having a 25% off sale on the #7939 LEGO City Cargo Train. This is a no-brainer deal on this very solid LEGO train set, and I would suggest that you take advantage of it while it last, and before prices jump up when the set gets retired. Further details below… 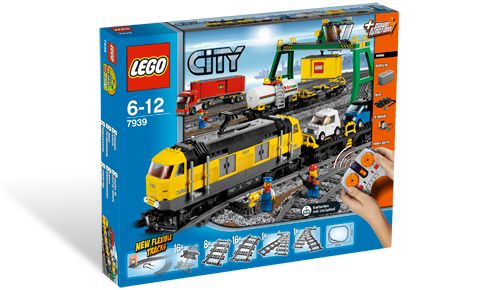 The #7939 LEGO City Cargo Train is still available at the Online LEGO Shop for $180, although it is currently shown as out of stock with an expected shipping date of April 14th. I’m pretty sure this will be the last stock available before the new #60052 LEGO City Cargo Train becomes available. Even at full price this set is wonderful for any LEGO train fan. Here is the official description and details: Load up the new Cargo Train and send it down the line! Use the big crane to load and unload containers and cars from the train and container truck. Open the canopies on the engine to reveal the driver’s cabins on either end; use the 4-channel, 7-speed infrared remote control to transport the goods along the tracks around the LEGO City! Includes 4 minifigures: 1 train driver and 3 freight yard workers. Includes a full set of tracks: 2 switch tracks, 8 straight tracks, 16 curved tracks, 16 flexible tracks that equal the length of 4 straight tracks.

As I have mentioned the #7939 LEGO City Cargo Train is at a 25% off sale on Amazon at the time of this writing for $134.39 with free shipping and no tax to most states. Please note that prices can fluctuate on Amazon quite a bit, so if you still see the deal when you read this, grab it! See here: LEGO CITY CARGO TRAIN ON AMAZON

As far as the upcoming #60052 LEGO City Cargo Train it is going to be a great set, and in fact the two trains together would be perfect! The #60052 LEGO City Cargo Train is also motorized with an 8-channel, 7-speed infrared remote control. It includes rail tracks, truck, forklift and cargo train station as well. Price is $199.99. There is also going to be two other train-related sets, the #60050 LEGO City Train Station for $64.99, and the #60051 LEGO City High-Speed Passenger Train for $149.99. You can see all three upcoming LEGO train sets in the following video:

I don’t really care for the new high-speed passenger train, however both the old and the new cargo train sets are wonderful in my opinion. What about you? How do you like the LEGO train sets? Are you planning to pick up the #7939 LEGO City Cargo Train before it sells out? And are you looking forward to the new one? Feel free to share your thoughts and discuss in the comment section below! 😉