LEGO is all over the news these days partially because of The LEGO Movie, but also because LEGO is plain awesome and has been a favorite for generations. At the recently held PAX East convention in Boston, LEGO artist Mariann Asanuma was working pretty much non-stop to bring a LEGO rocket-ship to life, right in front of convention guests. Mariann is a former LEGO Master Builder who’s LEGO building skills I always admired. She works on commissioned projects of all kinds, and she is fast too! 🙂 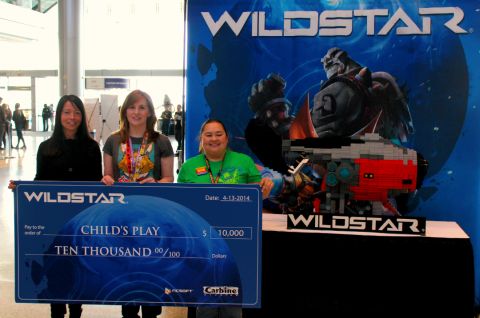 If you are not familiar with it, the PAX East Expo (also known as Penny Arcade eXpo) is a series of gaming festivals held in Seattle and Boston every year (and will also include other cities in the future). The festival includes everything related to the gaming culture; exhibitor booths from independent and major game developers and publishers, panels on game topics, tournaments and contests, video-game freeplay areas, tabletop games, and even game-culture inspired concerts. PAX is highly popular with gamers, and something like 70,000 people attend each event having the time of their lives. Below is the official press-release from the event in Boston if you would like to learn more. Also, watch Mariann build live at the included video!

Sculpture to be auctioned off later this year at the annual Child’s Play Dinner and Auction; $10,000 donated to local Boston hospitals

BOSTON (April 24, 2014) – At PAX East 2014, Carbine Studios® made a special donation to Child’s Play, a game industry charity dedicated to improving the lives of children with toys and games in its network of 90 hospitals worldwide. Carbine Studios partnered with LEGO® artist and instructor Mariann Asanuma to bring a WildStar® Rocket House, an exclusive in-game item only available through pre-order, to life with 50,000 LEGOs. The sculpture, standing nearly three feet high and four feet long, will be auctioned off at the annual Child’s Play Dinner and Auction taking place later this year, with proceeds going to the partner hospitals and facilities in the Child’s Play network.

In addition to the LEGO sculpture, a $10,000 check was also presented to Child’s Play which will be donated to the Boston Children’s Hospital and the University of Massachusetts Children’s MedicalCenter.

“Child’s Play is deeply grateful for the support of Carbine Studios and the WildStar team,” said Jamie Dillon, program coordinator and development, Child’s Play. “Creative, gamer-focused fundraising is the cornerstone of Child’s Play and we’re honored to be the recipient of both an incredible donation for two of our network hospitals as well as a work of LEGO art to be featured in our annual auction. These donations will allow us to provide video games to children who are in need of distraction, empowerment, entertainment and more. The contributions have a positive impact on the lives of hundreds of sick kids, and we are so grateful to Carbine Studios and WildStar for their donation.”

“We wanted to not only find a fun way to bring a small piece of WildStar to life, but also see the efforts go to a good cause,” said Mona Hamilton, vice president of brands, Carbine Studios. “Child’s Play is a wonderful charity doing really great things with the gaming industry and we’re looking forward to seeing the result of the auction later this year. It was also important for us to say thanks by giving back to the Boston community; they’ve been great to us over the years at PAX East.” For a list of partners and donation links, visit Child’s Play at www.childsplaycharity.org.

Unlike anything currently available, WildStar engages players with a beautiful and distinctive animation style, robust housing customization, and high-action combat that truly tests players’ skill with its fast-paced, reactive telegraph system. On top of that, the game’s personality is distinct in its own right; humorous, but laced with a mysterious undercurrent that implies there is more happening in the world than meets the eye. WildStar gives players the freedom to experience the game how they want to play, while providing an unprecedented level of exploration and discovery among the planet Nexus. WildStar is set to launch worldwide on Tuesday, June 3. For more information on WildStar and its pre-order details, please visit: www.wildstar-online.com

Child’s Play seeks to improve the lives of children in hospitals and child welfare facilities through the positive impact of video games and play. Founded in 2003, Child’s Play has expanded to over 100 network facilities worldwide and the games community and industry have raised over $25 million in support of the cause. Grassroots fundraising and industry support represent the generous spirit of the community and make it possible to provide necessary entertainment and distraction for children suffering in hospitals and other child welfare facilities.

Carbine Studios is a software development company focused on making high-quality, conceptually innovative Massively Multiplayer Online games. Located in Aliso Viejo, Calif., Carbine Studios was founded in 2005 as a division of NCSOFT Corporation® by a dedicated team of game industry veterans of watershed franchises such as World of Warcraft®, EverQuest®, Diablo® II and Fallout. The studio is currently hard at work on their sci-fi themed MMORPG, WildStar. For more information on Carbine Studios, please visit www.carbinestudios.com.

Interesting, isn’t it? Although lots of LEGO fans may consider becoming a LEGO Master Builder, LEGO only needs and can hire a limited number of people. However if you are considering working professionally with LEGO, this should not stop you. There are many other opportunities for LEGO fans with professional building skills. If you are interested to learn more, I highly recommend you follow Mariann Asanuma’s blog, as she regularly talks about the commissioned LEGO projects she works on. She mentioned that she will write about the PAX event also as soon as she can. See Mariann’s blog here: ModelBuildingSecrets

So what do you think? How do you like Mariann’s rocket-ship? Have you considered working for LEGO, or as an independent LEGO artists? Feel free to share and discuss in the comment section below! 😉