CNN news: everything is awesome for LEGO

There was a really interesting video published recently by CNN reporter Jake Tapper that I thought to share with you. Jake summarizes LEGO’s past struggles, highlights its current successes, and even hint on some future possibilities. Check it out and let me know what you think! 🙂

The CNN video was published just the day after The LEGO Simpsons episode came out, and pointed out that LEGO seems to be everywhere these days. Besides The Simpsons’ 550th episode where all of Springfield and its resident get LEGO-ised, there is also the The LEGO Movie with its incredible success. Even Lady Gaga got on the LEGO-craze in her latest music video where she fuses herself with a LEGO sculpture by LEGO artist Nathan Sawaya. And don’t forget about the new LEGO documentary, which just premiered at the Tribeca Film Festival, titled Beyond the Brick: A LEGO Brickumnetary by Daniel Junge and Kief Davidson (you can read more about the documentary here).

The CNN report the goes on to recount some of the challenges from LEGO’s past that almost resulted in bankruptcy, quoting David Robertson, the author of the fascinating book on LEGO’s history titled Brick by Brick: How LEGO Rewrote the Rules of Innovation and Conquered the Global Toy Industry (see full review here: LEGO Book: Brick by Brick Review).

Then the report turns to the present, highlighting LEGO’s current successes with new product lines, video games and of course The LEGO Movie. David Robertson prediction about where he sees LEGO heading is really interesting… competing with Disney? 🙄 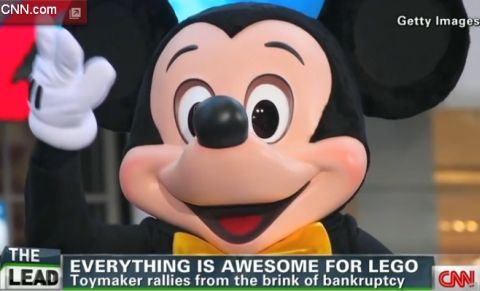 Overall I thought this was a really well put together and interesting report. Or maybe I’m just partial as a LEGO fan? What do you think? How did you like the video? And where do you see LEGO going in the future? Feel free to share your thoughts and discuss in the comment section below. 😉