From LEGO CUUSOO to LEGO Ideas

As you may have seen by now, LEGO CUUSOO, the website where you could submit your own ideas for future LEGO sets has been replaced by a new website called LEGO Ideas. LEGO CUUSOO was a collaboration between LEGO and the CUUSOO platform, and after their beta testing LEGO decided to bring the project in-house and make it part of the LEGO group of websites. There has been several changes and updates, so let’s take a look. 🙂

One thing I noticed right away is that the LEGO Ideas website loads so much faster than the previous LEGO CUUSOO site. The homepage is well designed and clean, with Staff Picks, Popular Projects, Projects in Review, and LEGO CUUSOO/LEGO Ideas sets that are already available for sale. There are other updates and changes, like now videos automatically get embedded into your project page (previously you could only link to videos) – videos are a great way to connect with your audience and promote your ideas, so this is a welcome improvement.

The transfer to the new website took place on April 30, when everything from the LEGO CUUSOO website got transferred over to LEGO Ideas. If you now try to reach the LEGO CUUSOO site, or any pages on the old site it will automatically redirect to LEGO Ideas. The redirect will work for six month, and will be discontinued on November 1st. So if you had projects on LEGO CUUSOO it is a good idea to update all links as soon as possible. Yes, this also means that you will need to contact all the websites, blogs and social media platforms where your project was promoted and shared to give them the new link, otherwise people won’t be able to vote on your submission, and all that promotion goes wasted.

Because the LEGO Ideas site is fully integrated into the LEGO website, your current LEGO ID that you use will work for LEGO Ideas as well. If this is the first time you are visiting the new site, it will ask for your LEGO ID, and will also ask if you would like to integrate your old CUUSOO ID with your LEGO ID. If you choose to integrate the two, you will receive a confirmation email to merge the two IDs, and all your previous projects and votes will be transferred over to the new site. If you don’t merge the accounts everything you have done under your LEGO CUUSOO account will be lost. 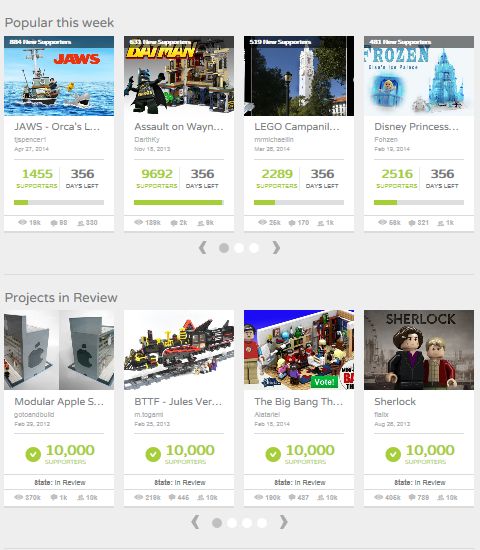 One big change that got implemented on the new platform is that from now on all projects submitted to LEGO Ideas will have one year to reach the required 10,000 supporters. Submissions that don’t reach 10,000 votes before the year is over will expire and will no longer be eligible to get further votes. (After improving your idea you may be able to resubmit it later, however you will start with zero supporters again.) Project that were transferred over from the LEGO CUUSOO website were able to keep their previous votes, and have until May 1st 2015 to reach the required 10,000 supporters, so they still have plenty of time.

Another important change is that submitted projects can no longer be edited. This was specifically implemented because some people were using LEGO CUUSOO to reserve ideas for themselves, although never submitted anything substantial, or submitted one thing, then later replaced it with something else. In the new system you can still add updates to your project, however you will have to think through your original submission more carefully, so just be mindful of this.

Also, although LEGO Ideas is designed specifically for older LEGO builders, they did open up the age-limit to younger teens since the launch of the new platform. So now if you are between 13-18 years old you may create and submit projects but if you reach 10,000 votes, you will need a written permission from a parent or legal guardian before your project will be considered for the review stage.

There are several other smaller changes, so if you are considering submitting a project on LEGO Ideas, I highly recommend you read them. You can quickly read though all of the major changes at the LEGO Ideas Blog page, and you can read the Project Guidelines & House Rules where everything is explained in detail. This page is very well designed so you can quickly find everything you need to know. 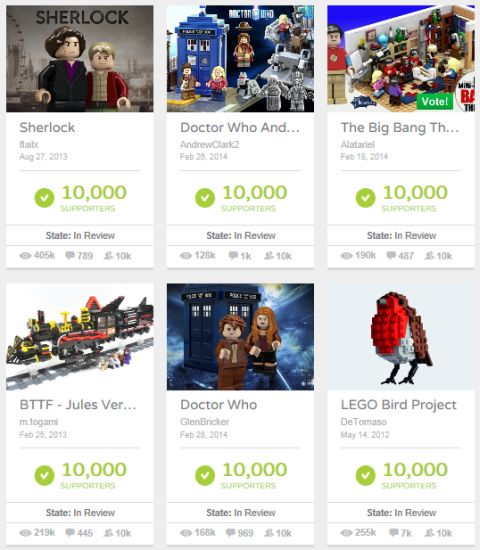 Few days after the new website launched, the LEGO Ideas team announced which projects qualify for the first 2014 LEGO review. They are the LEGO Bird Project, the Modular Apple Store, the BTTF – Jules Verne Train, The Big Bang Theory, and Doctor Who and Companions. (You can see all of these projects on the LEGO Ideas Discover page.) They also announced that the results for the winter review stage will be coming in the next few weeks which includes the Macross VF-1 Valkyrie, Sherlock, Legend of Zelda Iron Knuckle Encounter, Japanese Old Style Architecture, The Adventure Time Project, and the BTTF – UCS DeLorean Time Machine. The second 2014 LEGO review deadline is September 1st, and there are a number of projects that could qualify for it, if they get the required 10,000 votes. You can also check out those projects on the LEGO Ideas Discover page, and vote for your favorites (you can filter results on this page in various ways). And for currently available LEGO CUUSOO/LEGO Ideas sets submitted by LEGO fans you can visit the Online LEGO Shop.

I hope this article helps you in getting up to date about the change from LEGO CUUSOO to LEGO Ideas. I like the new website and I agree with the updates and changes as well. What about you? What do you think of the new LEGO Ideas website. And what about the new policies? Are there any other changes you noticed that you think are important to mention? Feel free to share your thoughts in the comment section below! 😉

Next post: CNN news: everything is awesome for LEGO