With Batman celebrating his 75th anniversary this year (the official Batman Day is July 23rd), expect lots of Batman related events. DC Comics is partnering with thousands of comic retailers and bookstores for special Batman releases, and the San Diego Comic Con this summer will feature hundreds of special exhibits dedicated to Batman (you can check out Batman75.com for regular updates). And of course LEGO Batman fans are also busy commemorating their favorite caped hero. 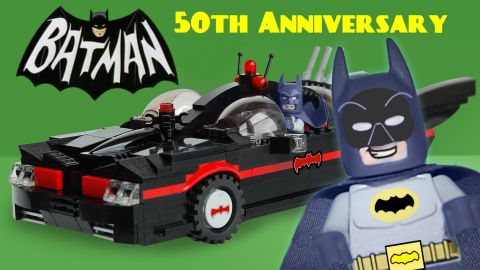 One such LEGO fan is 4-year-old Tiz, who especially adores Robin. She asked her dad, Sam Gras, to make a LEGO Batmobile for her that could fit Batman AND Robin at the same time; a reasonable request for sure – something LEGO designers should have thought of a long time ago. Anyway, sometimes grown-ups are less thoughtful than kids. What can I say? 🙄 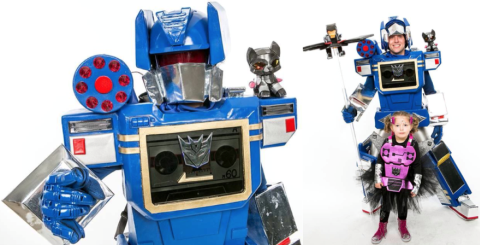 And Sam is an awesome dad who only wants to make her daughter happy. According to this article they recently entered and won first place at the New York Comic Con Most Difficult Costume contest with their Generation 1 Soundwave outfit. Sam and his daughter definitely look like great buddies in fun and crime!

So Sam set out to build a LEGO Batmobile for two as a gift for his daughter. And thinking that probably there are other LEGO and Batman fans who would like to get a two-seater LEGO Batmobile, he also submitted his design to LEGO Ideas (formerly LEGO CUUSOO). If the project reaches 10,000 votes LEGO will consider to make it into an official LEGO set. 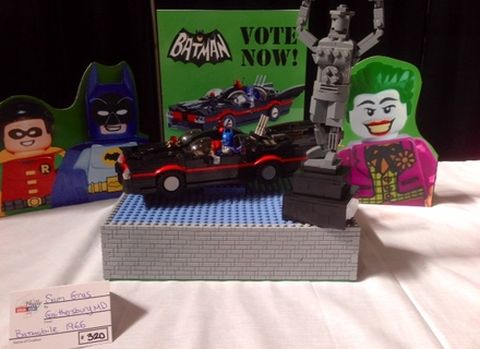 The LEGO Batmobile in fact already got quite a bit of recognition. It has been features by several LEGO forums and blogs and various other websites, and it already has almost 2,000 votes at the time of this writing. The LEGO Batmobile also won the Rocky Award and a LEGO Batman prize-pack at a DC Comics sponsored contest to celebrate Batman’s 75th birthday at the recent Philly BrickFest. But there are still 8,000 more votes to go, and here is where you can help out. You can read more about and vote for this project here: VOTE FOR LEGO BATMAN 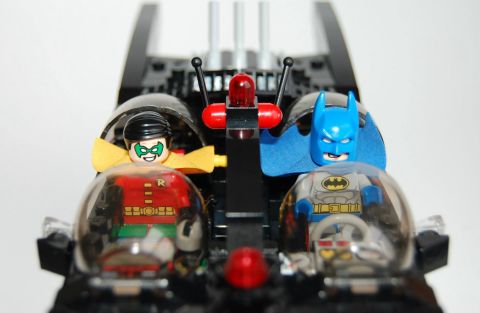 As I have mentioned, the LEGO Batman two-seater is listed on LEGO Ideas where you can vote for it to be made into an actual LEGO set. Here is the description of the project: WHAM! POW! ZAP!!! Help Batman and Robin capture The Joker and put an end to his devious plans. The Joker is wreaking havoc on the fair citizens of Gotham and only the Dynamic Duo can save the day. Using the latest bat-gadgets and crime solving techniques Batman and Robin race in the Batmobile to the scene of The Joker’s latest diabolical scheme. Can Batman and Robin save Gotham City? Tune in tomorrow- same bat-time, same bat-channel!

The LEGO Ideas team wrote this funny comment mid-April, when the LEGO Batman project reached their first milestone of 1,000 votes: Congratulations on 1,000 Supporters! Holy smoking strawberries Batman, this project is gaining supports in a jiffy! Fans everywhere can go back to the classic days of TV Batman and the boy wonder, when tights were fashionable, “POW” signaled a punch, and men wore masks to fight crime. Good luck as you WHAM! and ZAP! your way to 10,000 supporters! 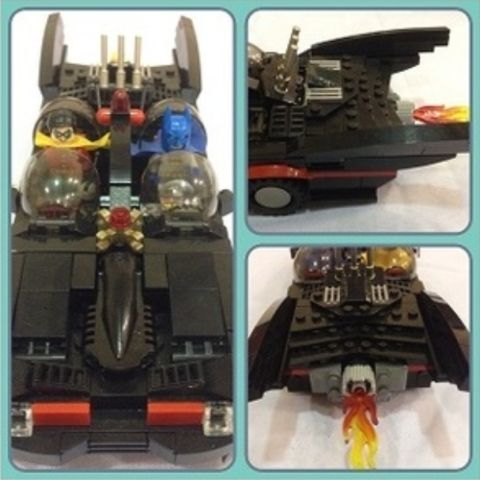 Sam and his daughter are asking for your help to make their special LEGO Batman 75th anniversary project into an official LEGO set. Here is their message: “My name is Sam. I’m a cosplayer, father and all around geek. My four year old daughter, who is obsessed with Robin, asked me to make her a LEGO Batmobile that Batman and Robin could ride in together. I made her the 1966 Adam West version. which is now on the Lego Ideas site. With your help, I’m sure we can reach the goal of 10k supporters. Would you vote for my build and share with your friends? This would make an awesome little girl and her father very happy. Thank you for all your support.” Vote for his project here: VOTE FOR LEGO BATMAN

So what do you think? How do you like this LEGO Batman project? Did you vote for it? Do you have any thoughts or questions for Sam? Feel free to share in the comment section below! 😉