➡ #70160 LEGO Agents Riverside Raid – Urgent call for rookie Ultra Agent Max Burns! Adam Acid is trying to steal crates of toxic compounds from the Astor City docks for his Super Villain master, Toxikita. Give chase on the awesome 2-in-1 quad bike and jet speeder and thwart this Riverside Raid! Fire the stud shooters from the vehicle or detach and use them as hand weapons. Activate the jet speeder function to split off and take the action-packed pursuit to the water. Attach the rear winch to pull back the jet speeder, and when you’ve located the missing crates, use it to drag them back to a safe place. Includes 2 minifigures with weapons: Agent Max Burns and Adam Acid. 88 pieces. Price: $11.99 – BUY HERE 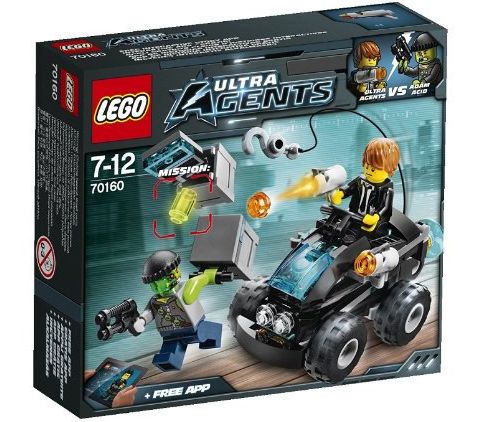 ➡ #70161 LEGO Agents Tremor Track Infiltration – Attention Ultra Agent Jack Fury! Tremor, the iron-fisted Super Villain, is rampaging through the streets of Astor City in his fearsome armored track vehicle. Your vital mission is to protect the ultra chip which contains all the Ultra Agents’ secret plans. Stay clear of the vehicle’s massive power-punching fists. Fend off the flick missiles with the shield and retaliate by firing the stud shooter. Use all your skills to outsmart this heavily-armored Super Villain. Just one mighty punch from Tremor’s vehicle will explode the mainframe database and release the precious ultra chip! Includes 2 minifigures with weapons and accessories: Tremor and Agent Jack Fury. 241 pieces. Price $19.99 – BUY HERE 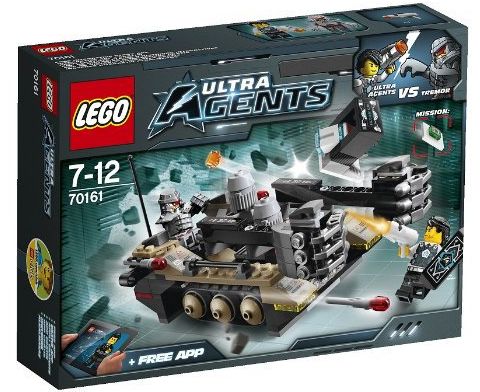 ➡ #70162 LEGO Agents Infearno Interception – Calling Ultra Agent Solomon Blaze! Infearno is flying high above Astor City on his flame-powered hover board. The Super Villain is wearing a flamethrower suit and dropping sticks of dynamite, spreading fear among the citizens. Set off in hot pursuit in Agent Solomon’s awesome convertible car with huge wheels and protective translucent blue energy panels. Fold the wheels for hover mode and launch into a midair battle! Target the flame-headed criminal with the dual laser cannons and the hidden automatic missile shooters. And if Infearno’s attacks get too hot to handle, activate the super-cool ejector seat function to evade the flames! Includes 2 minifigures with assorted weapons and accessories: Infearno and Agent Solomon Blaze. 313 pieces. Price: $29.99 – BUY HERE 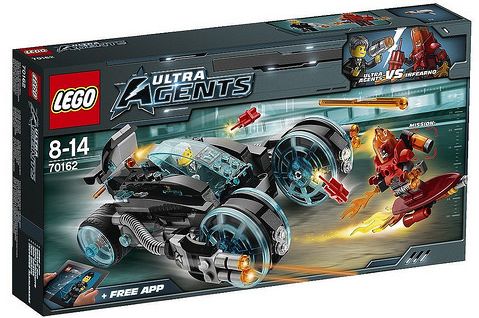 ➡ #70163 LEGO Agents Toxikita’s Toxic Meltdown – Report for duty Ultra Agent Curtis Bolt! Evil Toxikita has discovered the top-secret lab at Pointer Island and is dropping toxic bombs from her helicopter, piloted by her henchman, Retox. Inside the lab, the Astor City Scientist has been carrying out vital experiments using the remote-control safety claws. Rush to protect him and guard the crystal that Toxikita is trying to steal to power up her super weapon – it can cause extreme damage in the wrong hands! Fire your stud shooter and the lab’s flick missiles as Toxikita swoops down from the helicopter on the chain. Intercept her before she activates the explode function to release the crystal and causes complete metropolis meltdown! Includes 4 minifigures with assorted weapons and accessories: Toxikita, Retox, Agent Curtis Bolt and Astor City Scientist. 429 pieces. Price: $39.99 – BUY HERE 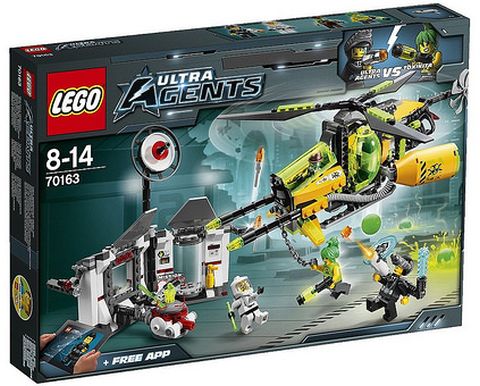 ➡ #70164 LEGO Agents Hurricane Heist – Red alert, Ultra Agents! Team up to defeat wind-powered Super Villain Psyclone who is whipping up storms and wreaking havoc across Astor City. Psyclone’s awesome transforming flyer is equipped with giant spinning rotor blades to whip up whirling tornados. His super threatening vehicle is also armed with quad laser cannons and automatic missile shooters. Flip the wheels of Agent Caila Phoenix’s futuristic motorbike for fly mode and fire back with its twin stud shooters. Double the aerial attack with Agent Jack Fury using his jetpack and big plasma cannon. But watch out – Psyclone’s aircraft can quickly transform into a massive mech that looks just like him… only much, much bigger! This Super Villain is on a mission to create a whirling tornado and suck up all the money, so move fast to protect Astor City’s assets and its citizens! Includes 4 minifigures with weapons and accessories: Psyclone, Astor City Guard, Agent Caila Phoenix and Agent Jack Fury. 589 pieces. Price: $69.99 – BUY HERE 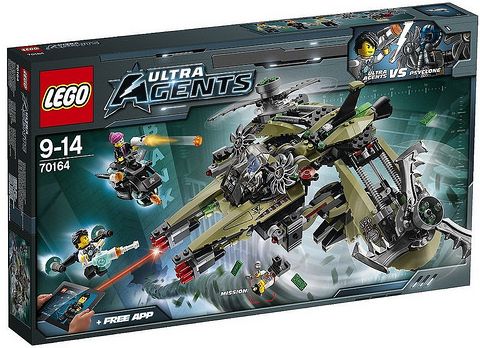 ➡ #70165 LEGO Ultra Agents Mission HQ – Emergency! Evil cybernetic hacker Terabyte is attacking the Ultra Agents’ mobile Mission HQ on a mission to disable Astor City’s entire communication network. Drive the high-tech truck in undercover mode and fire the automatic missile shooters to fend him off. Launch the hidden flyer to spy for enemies from above. Push the lever to detach the driver’s cabin and open up the rear of the truck to reveal the inside of the awesome HQ. Plug in the laptop containing the top-secret mission plans in the briefing room and view them on the big screen. Analyze clues and carry out tests in the lab with Professor Christina Hydron. Strap on a jetpack and attach the extendable robot arm to prepare Agent Phoenix for lift-off. Stop Terabyte escaping with the laptop containing all the Ultra Agents’ secret files while his hi-tech mech tries to destroy the communications system by firing hacking bombs at the satellite dish. Launch the buggy down the ramp and fire the stud shooters to defend the Ultra Agents HQ. You must capture this criminal nerd in the high-tech prison cell before he can cause any more damage! Includes 5 minifigures with accessories: Terabyte, Agent Solomon Blaze, Agent Caila Phoenix, Agent Curtis Bolt and Professor Christina Hydron. 1048 pieces. Price: $99.99 – BUY HERE 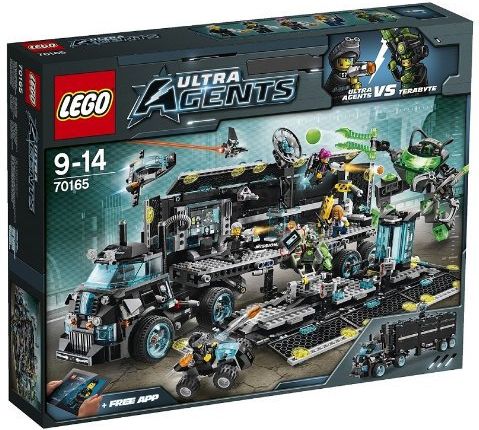 Interesting sets, aren’t they? And the minifigs are super cool. I absolutely love Terabyte! Make sure you also check out the video-review linked at the end of this post. As I have mentioned, the LEGO Ultra Agents sets are now available at LEGO brand stores, LEGO retailers and the Online LEGO Shop.