As we have discussed before, the LEGO summer sets have been released and available at the Online LEGO Shop (see: What’s New at the Online LEGO Shop). For those of you who prefer to shop on Amazon however, there is good news; many of the summer LEGO sets are now also listed on Amazon. With Amazon the qualification for free shipping is lower than with LEGO’s own website ($35 instead of $75), and also there is no sales-tax included shipping to most states. So if you prefer Amazon, here is your chance to pick up some of the summer LEGO sets. 🙂 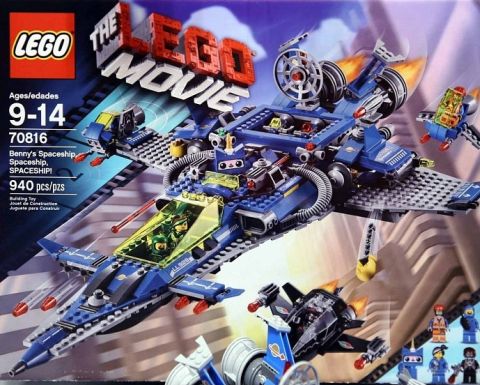 Please note that prices on Amazon can fluctuate quite a bit and also items can sell out fast, making them available only from Amazon affiliates with higher prices. So to make sure the item has the “Qualifies for Free Shipping” notification and the standard LEGO price. These are sold directly by Amazon and not by third parties. Also, on Amazon you can add other non-LEGO items to your purchase to meet the free shipping requirement. I regularly buy books, videos, ink-cartridges, and even food items and nutritional supplements on Amazon. With low pricing, no tax, and free shipping, it ends up being cheaper than shopping locally.

➡ THE LEGO MOVIE SUMMER SETS ON AMAZON – All three of the new sets are now available, including the #70814 LEGO Emmet’s Construct-o-Mech, the #70815 LEGO Super Secret Police Dropship, and the #70816 LEGO Benny’s Spaceship, Spaceship, SPACESHIP! – SEE ON AMAZON

➡ LEGO NINJAGO SUMMER SETS ON AMAZON – Both of the new LEGO Ninjago summer sets are now available, including the #70727 LEGO Kai’s Ninja Charger, and the #70728 LEGO Battle for Ninjago City. – SEE ON AMAZON

➡ LEGO SUPER HEROES SUMMER SETS ON AMAZON – The Guardians of the Galaxy sets are now available, including the #76019 LEGO Starblaster Showdown, the #76020 LEGO Knowhere Escape Mission, the #76021 LEGO The Milano Spaceship Rescue, and the #76022 LEGO X-Men vs. The Sentinel. – SEE ON AMAZON

➡ LEGO THE SIMPSONS ON AMAZON – While the popular LEGO The Simpsons Collectible Minifigures have been sold out at most retailers, they are available on Amazon as an add-on item for orders over $25. Also, the #71006 LEGO The Simpsons House is back in stock for the regular retail price. – SEE ON AMAZON

➡ LEGO CITY ARCTIC SETS ON AMAZON – Some of the new LEGO City Arctic sets are also listed, but most of them are by Amazon affiliates/resellers. However there are some that are listed directly by Amazon and qualifies for free shipping. – SEE ON AMAZON

➡ LEGO MIXELS ON AMAZON – The new series of LEGO Mixels are also available on Amazon. They have been sold out at the Online LEGO Shop, so this is a good option to pick them up. – SEE ON AMAZON

Amazon has a huge selection of LEGO sets, both current releases and discontinued sets, so take the time to look around even besides the sets I mentioned above. Oh, and let me know what you got! 😉