Simply put, LEGO sets like the #10244 LEGO Creator Fairground Mixer are the very reason why adults get into the LEGO hobby and why children become life-long fans. In short, this set is a masterpiece. Jamie Berard is known for LEGO Creator Expert sets like the #10243 LEGO Parisian Restaurant and the #10214 LEGO Tower Bridge, and he continues to impress with the #10244 LEGO Fairground Mixer. Not only does this set showcase functional attractions, but there is the added detail that everything can be folded up onto trucks and moved along. In fact, it’s just as fun packing things away as it is playing with it. So let’s take a closer look at all of the details and features that makes this set so interesting. 🙂 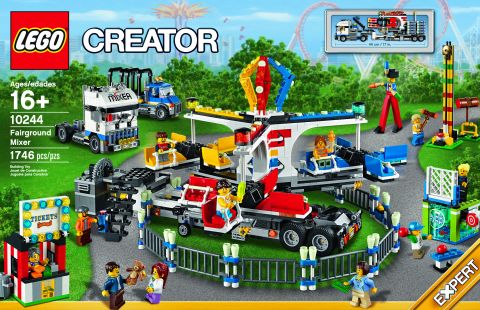 Standing next to the fence with two sizes of hammers is the strong man. He directs anyone with a ticket to try their luck at the game. By hitting the inverted dish you can trigger a catapult at the base of the machine. It cleverly uses a 1×2 modified plate with two clips on one side to fit around the long bar without running into it. However, each clip is close enough to make contact with the pin-sleeve which will propel it up the bar. Gravity pretty much does the rest of the work. 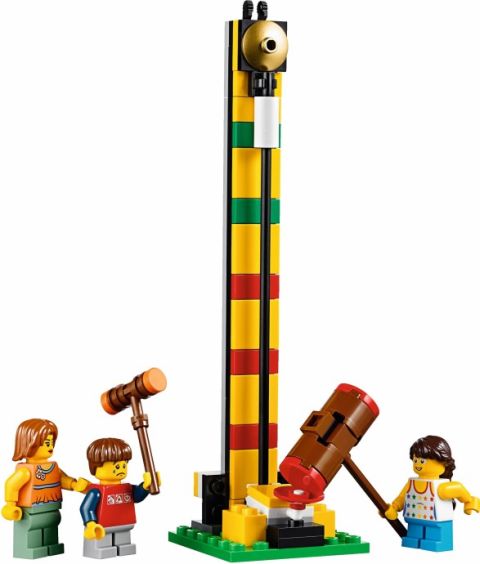 The other point of interest is the two locking fingers piece at the top near the bell. This is what allows the assembly to be locked into place when you slide it underneath the smaller truck. Deep within the truck near its front is a horizontal clip. The clip and the two finger connection are not necessarily compatible, but they provide enough friction to secure the assembly in place while traveling, while also allowing easy removal without the strength test machine getting accidentally dismantled in the process.

Here’s a simple mechanism that looks rather complex. The whole thing works around two lift-arms; one swivels with the target forward and backward, while the other forms the seat and moves up and down. The seat delicately rests on the target’s lift-arm, and if the target moves too far forward or back, the seat falls. It’s actually amazing how simple all of this is and at the same time delivers a fabulous effect.

As for an interesting LEGO building technique, look at the two sideways fences that make up the protective screen. Normally when building sideways you have to follow a five-plate-to-two-stud rule; which essentially means that for every five plates of thickness you can cover two studs of space. In this case, the middle of the tank is four studs wide which means that you would need to use ten plates worth of thickness. However, each fence is six plates high which means they cover a twelve plate area from left to right. The extra two plates unaccounted for come from the unique shape of the modified 1×2 plate with finger in place of one of the studs. It is set far enough back to allow one extra plate on each side. If this is a bit too much to follow, just trust me that the protective net is something special. Make sure to take some time to understand how it attaches. As long as you have that in mind, you’ll be able to use this technique in the future.

This little booth contains a register and a two-drawer unit. The top drawer is full of cash while the bottom has tickets. The signs are stickered and contrast well with the red and white vertical striping. Its coolest feature is the sign that folds down in front to make the whole booth a bit more portable in storage. Speaking of storage, you may wonder why the back of the ticket booth is so open. This is to allow the target on the dunk tank to fit inside to make packing both units on the truck possible. 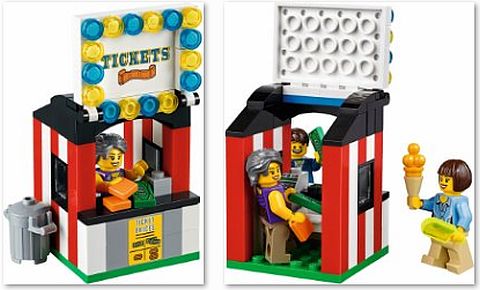 Up to this point, everything mentioned fits on the smaller truck. The strength test fits in a slot underneath, while the tank and ticket booth rest on the bed of the truck. As for the fence with hammers, table with balls (this is for the dunk tank and I forgot to mention earlier), and the accessories for the juggler on stilts (who is more of a decorated minifigure than a full attraction), can now fit inside the dunk tank and ticket booth. The truck itself is a good six studs wide, so has a nice bit of bulk to it. Inside the cab there is a seat for the driver and not much else. Granted, you could fit a second minifigure in the cab, but it will take some creative arms-posing and patience. 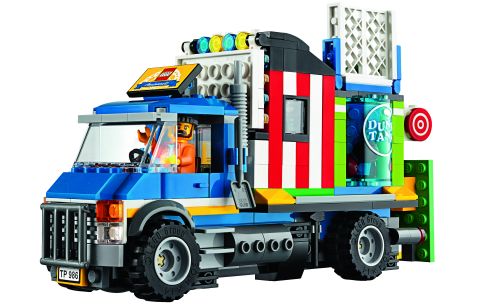 Before getting to the main attraction, you’ll need to build the big rig that pulls the ride around. This is a massive eight-stud-wide vehicle with two seats inside the cab. Just behind these two seats is a small bed with a TV at the foot of the bed. Small details like the brick-built doors and windshield-wipers give this truck an extremely personal touch. You may wonder about the back of the truck as it has these strange dips and curves. However, these will all be accounted for in the storage portion of the set. As for the size of the vehicle, it helps make the carnival-ride look smaller.

This has got to be one of the favorite rides at the fair. When building it, you will see that it is divided into the base, the central seating and the decorative component. The base – for the most part – is a fancy gear-box, trailer, and stair unit. The fences that attach to this base are built later. The base also has an interesting handle that – as you later discover – locks the seats in place when stored. 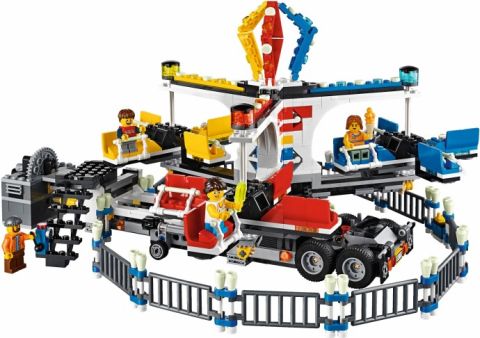 Looking at the central unit, there is a tremendous amount of hinge-work to form a triangular core. As for the arms that hold the seats, the yellow seating area is solid while the red and blue areas use hinges to swivel into place. The red and blue seats then lock into place with clips and bars that are ingeniously hidden. And as for the seats themselves, two of each color are fixed to the axle they attach to, while the other two are loosely put in place and simply rest in between modified tiles with bars without being attached. The spinning action comes from a hidden axle under each bar that connects with the vertical axle via small gears. These are in turn powered by wheels that are right next to the center of the machine. This means when the center turns, the wheels inadvertently rotate the axles which turn the outer axles and thus move the seats.

The fence with the garbage can does connect into the Fairground Mixer, but it feels more like an accessory that helps complete the ride’s final look. In order to store this bit of safety equipment, you will build a rack that the fences will get loaded onto. As for minifigures, you get a whopping twelve. Many are kids to enjoy the attractions. One has a teddy bear, while others have either food or a ticket. Inside the garbage can are green cherries, which is a little odd. After all, no one is eating cherries. There are also stilts with little pointed feet for the juggler. He also gets three juggling-pins made from ice-cream cone pieces and normal cone bricks. He also has a brick-built hat with clip so it looks like he’s in mid-juggle. 😀

Apart from the numerous round tiles that look like lights, you also get a good deal of stickers. Whether it is mud-flaps, signs on the trucks, signs on the ticket booth, or words on the dunk tank, there is a lot of stickering to do. Even the license plates are stickers. Make sure you have a steady hand before tackling this set. An interesting choice was the cones on the fences and bars on the Fairground Mixer. All are the very rare glow-in-the-dark color. This, of course, extends the fun, whether it is during the day or at night.

You get three books of instructions. After building the set you may want to keep them in easy reach; they outline how to pack everything up on the trucks which is not hard, but may take some practice. The instructions also show you how to motorize the Fairground Mixer. It recommends using a small motor, which is not included in the set. You will need to search for LEGO Power Functions to find the right pieces. Thankfully, what you need is outlined in the instructions to help those who may not be familiar with the LEGO Power Functions elements.

The #10244 LEGO Creator Fairground Mixer is an amazing set without a doubt. It gives you a fantastic ride along with other small attractions that really fill up the space nicely. If it has any drawbacks it would be that you may want a bigger ride to complement the setup. This means finding the long retired #10196 LEGO Grand Carousel

or the #4957 LEGO Creator Ferris Wheel

– which might be something you want to look into. Problem is, these aren’t cheap sets on the secondary market. Another thing you might consider to expand your carnival setting is adding some of the LEGO Collectible Minifigures; there are all sorts of clowns and people in costumes you might like to add to your fairground.

In conclusion I would say that buying one copy of this set is a must for any LEGO City fan. Secondary copies will give you a good deal of LEGO Technic elements as well as nice parts for detailing. If you are a collector, this is an excellent display set and a good candidate to hold onto for selling later. There’s just enough hard-to-find pieces that make it difficult to build it from spare parts that you already have, while it’s also a clever enough design to give it a high demand later down the line. It is available at LEGO stores and at the Online LEGO Shop. It’s well worth getting mixed up in this Mixer.

So what do you think? How do you like the LEGO Fairground Mixer? Is this a set that you are considering getting, or do you already have it? Feel free to share your thoughts on it in the comment section below! 😉

Next post: LEGO Ideas: The Little Prince in LEGO