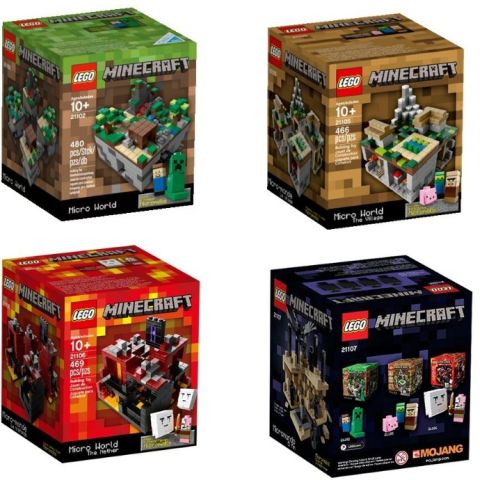 I recently built the #21107 LEGO Minecraft The End set, so I thought to share my thoughts on it with you. Just like the previous LEGO Minecraft Micro World sets, The End comes in a cube-shaped box, but this time in black and purple. It in interesting to note that this set has the least pieces at 440 (the others include 480, 466 and 469 pieces), however it ends up being the same size as the others, so it is not like we are missing out – there are just more larger pieces used. Plus we get an awesome brick-built Ender Dragon. 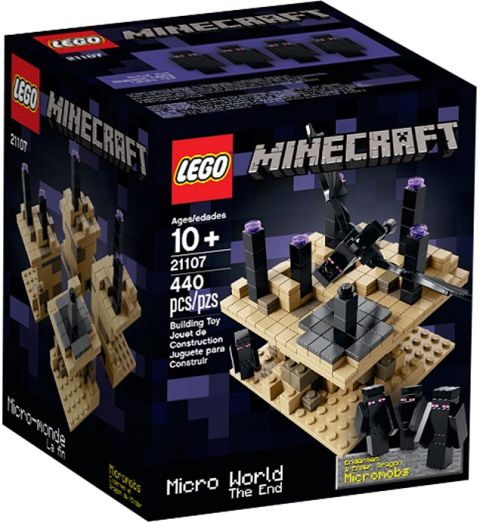 Like the previously released LEGO Minecraft sets, this one comes with tons of small elements excellent for micro-building and detailing your LEGO creations. I mean there are 62 1×1 tan plates, 101 1×1 tan tiles, 25 dark-tan 1×1 plates, 23 dark-tan 1×1 tiles, 12 dark-bluish-gray and 12 black 1×1 tiles – that’s a lot of 1×1 elements! Plus there are also those really sweet 1×1 round tiles in trans-purple – 6 of them! 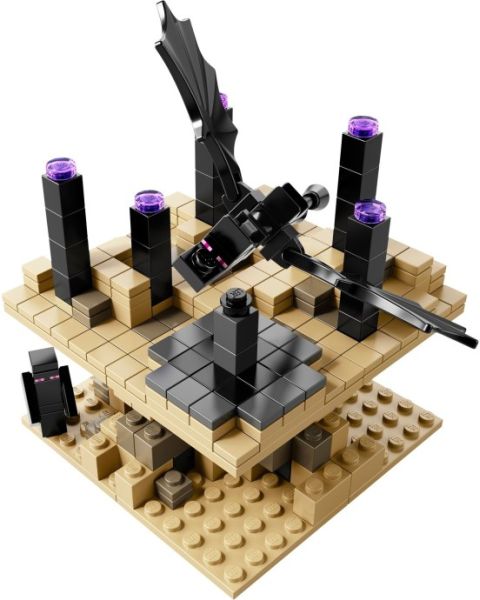 The layout of the set is the same as the previous ones; it is made of four sections connected with LEGO Technic pins, and can be configured in any way you like. In addition, the top of each of the sections are removable and they can also be configured in whichever way you prefer. I would say that the bottom sections are not as interesting as in the other LEGO Minecraft sets, but The End is not supposed to be a particularly interesting place… 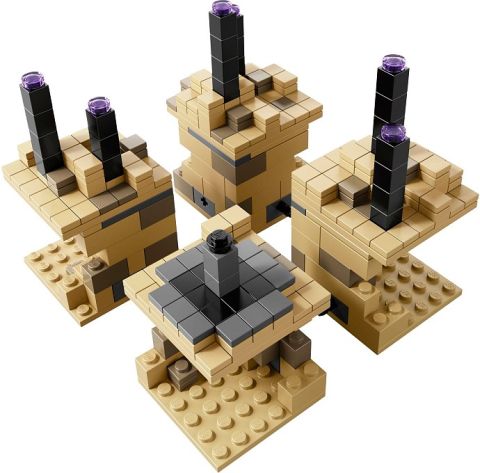 The main feature of The End is the black Obsidian pillars, the Endermen, and the Ender Dragon. I really like the four Endermen; they are a simple, but effective build. In case you didn’t know; the features on their faces are printed on 1×1 plates, just like in the other LEGO Minecraft sets. 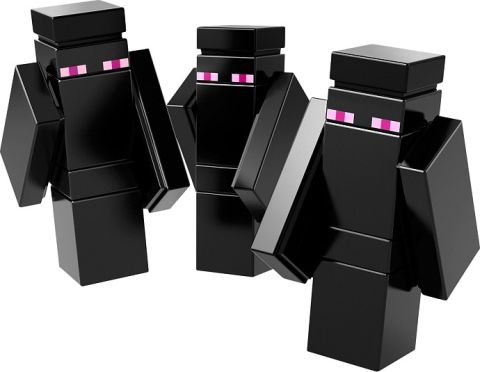 One thing I was not happy about is the much reduced extra pieces (these are small additional pieces in case you loose some, and are not included in the total piece-count for the set). In the first LEGO Minecraft set 41 extra pieces were included, in the second 24, the third 20, and in The End only 15. These extra bits of 1×1 elements are quite useful both for replacing lost pieces and for using them in your own LEGO creations, but I guess LEGO decided they will cut back on their generosity. Not very cool. 😕

All in all I’m very happy with this LEGO Minecraft set, as it is a worthy addition to the previous ones (see video above by the BrickQueen on how they all look together). It is not my favorite, simply because the colors are not as interesting as in the other sets, but it is a good representation of The End and it adds a good variety to the line-up. My favorite LEGO Minecraft set remains The Village, due to it being so interesting. I also really like The Nether because of the beautiful rare colors.

As I mentioned at the beginning, I’m fairly certain this is the last LEGO Minecraft Micro World set, as LEGO is planning to release a minifigure-scale LEGO Minecraft line in the near future. So if you are interested in collecting interesting LEGO sets, or sets with useful elements The LEGO Minecraft Micro World series is a nice collection that will not break the bank or take up too much space. Actually, I will say here that in the LEGO Minecraft sets there is not a single worthless element – every single piece is useful and even highly desirable, so yeah, they are good investments as well. You can get the entire collection at the Online LEGO Shop.

As far as the release of larger LEGO Minecraft sets this is a interesting development because the original LEGO Minecraft idea that was submitted to LEGO CUUSOO was in fact minifigure scale. LEGO decided to redesign it into micro-scale, but apparently now they see the benefit of switching back to minifig-scale. This is probably due to the popularity of the LEGO Minecraft sets, likely more than expected. I have seen preliminary images of the larger sets, and although I’m sure some people will like them, I much prefer the smaller sets – perhaps because I really like micro-building with LEGO and I like small elements in general for detailing.

What about you? How do you like the LEGO Minecraft Micro World sets? And what do you think of The End? Are you looking forward to the larger LEGO Minecraft sets, or do you prefer the smaller ones? Feel free to share your thoughts and discuss in the comment section below! 😉

Next post: How to keep LEGO displays free of dust