As we have discussed previously (see links at the end of this post), the second series of LEGO Mixels characters have been released this month. Although I got all of them as soon as they were released, I have avoided writing a review as the new characters sold out within one day at the Online LEGO Shop. I didn’t want to disappoint you talking about a great series that you couldn’t get. However now that they are back in stock, let’s take a closer look at these wacky little guys! 🙂

➡ LEGO BLUE MIXELS – this is the icy Frosticon tribe, including #41509 LEGO Mixels Slumbo, #41510 LEGO Mixels Lunk, and #41511 LEGO Mixels Flurr, all very cute and funny characters with interesting pieces and clever building techniques. All three of the characters include several of the new small ball-hinges, and the color combination of medium-azure, regular blue, trans-blue, and trans-medium-blue (as referred to on BrickLink) is very nice. I particularly like the little dragon. Check out the video-review of each of the blue-tribe characters by JANGBRiCKS below.

➡ LEGO BROWN MIXELS – this is the Fang Gang, including #41512 LEGO Mixels Chomly, #41513 LEGO Mixels Gobba, and #41514 LEGO Mixels Jawg, all with lots of teeth. Again, you will get more of the small ball-hinges, although not in all three characters; the mad-dog looking Jawg doesn’t have any, but the other two does. This is actually my favorite tribe from this series, especially Gobba. He is evilishly cute, has great articulation and likes to chomp on my finger. 😈

➡ LEGO ORANGE MIXELS – this is the Flexers tribe, including #41515 LEGO Mixels Kraw, #41516 LEGO Mixels Tentro, and #41517 LEGO Mixels Balk. All three of them are quite unusual looking crab and octopus-like creatures with lots of movable legs and long pincher-looking things. Only Balk has the new ball-joints, however the other two are also very articulated using hinge elements.

I’m not at all disappointed with this second series of LEGO Mixels. It continues the trend from the previous series of great little creatures built from useful small parts in great colors, employing interesting building techniques. And you also get three more Nixels (one with each new tribe). The Nixels are the same as in the first series, so if you are collecting all the LEGO Mixels now you would have two of each. Also, just like with the previous series, you can create LEGO Mixels Max models by combining all three characters from each tribe. You can find the instructions for the Maxx characters here: Download LEGO Mixels Max Instructions

My favorite LEGO Mixels tribe remains the red Infernites, followed by the yellow Electroids, then the brown Fang Gang, the blue Frosticons, the orange Flexers, and finally the gray Gragsters. My three most favorite characters are Zorch from the red tribe, Volectro from the yellow tribe, and Gobba from the brown tribe, but it is hard to choose as they are all really cute. I rotate which one I keep on my desk. 🙄

The second series of LEGO Mixels is now available at the Online LEGO Shop (although I don’t know for how long as they sold out really fast the first time around). And if you are lucky, you may also find them at various LEGO retailers like Toys’R’Us, Wal-Mart and Target. There will also be a third series coming later this year – we will talk about those later. If you are into collecting fun and cheap little LEGO sets with lots of potential, LEGO Mixels are a perfect choice. They are also great for displaying and just for doodling around. Besides they are too cute to resist! 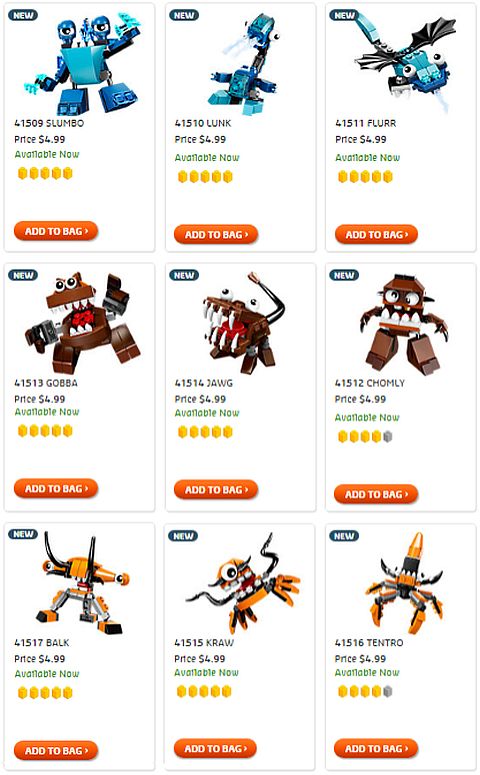 So what about you? How do you like LEGO Mixels? Which one is your favorite LEGO Mixels tribe? And who is your all-time favorite character? Feel free to share and discuss in the comment section below! 😉