(Written by the enigma that is badger)

Some time ago, I greatly enjoyed Taryn’s blog post on the similarities between the themes and characters of the Star Wars universe and those of LEGO Ninjago (see: May the Force be With You… Ninja Style?), citing numerous lines and scenes in the Ninjago TV-series that seemed to echo that galaxy far, far away. However, as a dedicated cineophile, I thought I’d share another interesting layer to the story: LEGO Ninjago has almost certainly been influenced by Star Wars, but then Star Wars itself was inspired by ninjas! . . . well, samurai, and in particular one famous samurai film; Akira Kurosawa’s The Hidden Fortress (drawing by vonholdt). 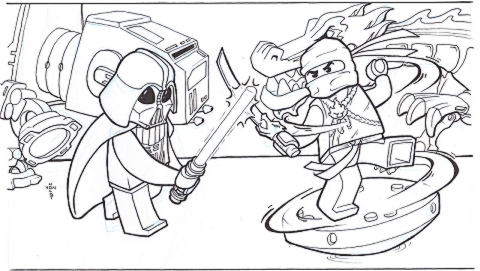 Here is the trailer for the film featuring commentary by Brian Trenchard-Smith, famed Australian genre director, in which he discusses the connections between the two epic movies.

It was at USC film school where George Lucas was introduced to the work of Akira Kurosawa, one of the greatest directors in the history of cinema. While Kurosawa’s films cover a variety of topics and time periods, Kurosawa is perhaps best known for his historical drama films (commonly referred to as jidaigeki) which feature stunning visuals, gripping stories, and visceral action. Lucas was struck by the power of Kurosawa’s work, and it deeply influenced his development as a director. Below is a clip with George Lucas talking about his introduction to Kurosawa’s films. Lucas has acknowledged heavy influence of The Hidden Fortress on Star Wars, particularly in the technique of telling the story from the perspective of the film’s lowliest characters, C-3PO and R2-D2. Lucas’ original plot outline for Star Wars also had a strong resemblance to the plot of The Hidden Fortress.

I could easily just list all the aspects of The Hidden Fortress Lucas “borrowed” for Star Wars, but I think showing them makes the point even more strongly. Check out the video below, with scenes from the two films.

Of course, Lucas didn’t find inspiration solely in Kurosawa; several other key aspects of Star Wars were directly inspired by other films Lucas admired. The epic Death Star trench battle started off as brave RAF pilots blasting apart German dams in the classic WWII film, The Dam Busters. There is an interesting video where someone put together the audio from the Star Wars scene with clips from The Dam Busters. You can see it here: The Dam Busters a la Star Wars. And who can forget the classic Star Wars title-crawl, right? There is another video where you can see a visual comparison of the famous opening title-crawl of Star Wars and the somewhat less famous (but earlier) opening title-crawl of the 1930’s Flash Gordon serial. See video here: Star Flash Gordon Wars.

I realize that a black-and-white, subtitled Japanese film that’s over five decades old might be a hard sell to many, but The Hidden Fortress is not only an amazing film for its connection to Star Wars but also as an excellent gateway to the rest of Kurosawa’s filmography which features no small number of masterpieces of cinema, such as The Seven Samurai, Rashomon, Ran, and many others.

I hope this article helped you a bit to see the deeper and quite fascinating connection between LEGO Ninjago and Star Wars, and jidaigeki and Jedi. If you are interested, you can read more in the book The Secret History of Star Wars by Michael Kaminski, and you can also get Kurosawa’s films on Amazon

. Thanks for reading, and let me know what you think! Your questions, comments and feedback are welcome! 😉